Clone area between MBR & 1st partition using dd. The MBR is only the first sector or 512 bytes of the hard disk as that is all the Bios would read.It appears the whole track or the first head, equal to the number of sectors per head times sector size, is reserved for the MBR usage. 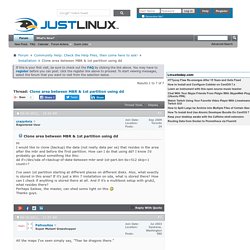 I suppose in the old day when each hard disk can have its own geometry, like the USB flash drive today, it would make sense to leave out the first head completely when starting the first partition, as Manufacturer A might opt for 16 sectors per head while another manufacturer B chose 32 sectors per head. It only got standardised to 255 heads and 63 sectors when the hard disk capacity exceeded the limit addressed by Cylinder/Head/Sector method. Nowadays a hard disk commonly uses the LBA addressing system with each cylinder standardised to 255 heads, each head has 63 sectors and each sector has 512 bytes one could have expected if the first head is omitted the first partition will start at the 63+1 = 64th sector.

Tips For Linux - How and when to use the dd command? In this article, Sam Chessman explains the use of the dd command with a lot of useful examples. 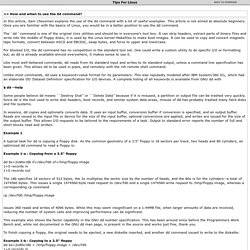 This article is not aimed at absolute beginners. Once you are familiar with the basics of Linux, you would be in a better position to use the dd command. The ' dd ' command is one of the original Unix utilities and should be in everyone's tool box. It can strip headers, extract parts of binary files and write into the middle of floppy disks; it is used by the Linux kernel Makefiles to make boot images. It can be used to copy and convert magnetic tape formats, convert between ASCII and EBCDIC, swap bytes, and force to upper and lowercase. For blocked I/O, the dd command has no competition in the standard tool set.

Like most well-behaved commands, dd reads from its standard input and writes to its standard output, unless a command line specification has been given. Unlike most commands, dd uses a keyword=value format for its parameters. How To Do Eveything With DD. The real dd command The basic command is structured as follows: dd if=<source> of=<target> bs=<byte size>(usually some power of 2, not less than 512 bytes(ie, 512, 1024, 2048, 4096, 8192, 16384, but can be any number.) skip= seek= conv=<conversion>. 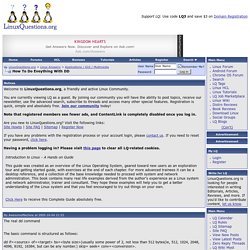 Source is the data being read. Target is where the data gets written. If you mess up, and accidentally reverse the source and target, you can wipe out a lot of data. Examples:: Copy one hard disk partition to another hard disk: dd if=/dev/sda2 of=/dev/sdb2 bs=4096 conv=notrunc,noerror sda2, sdb2 are partitions. Make an iso image of a CD: Linux and Unix Test Disk I/O Performance With dd Command. How can I use dd command on a Linux to test I/O performance of my hard disk drive? 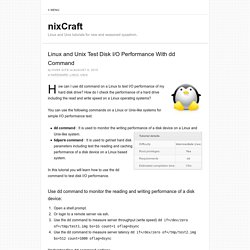