Includes research and options for 1:1 devices at Indian Creek Schools.

The Best Chromebooks of 2016. There are plenty of laptops available, but what do you buy when pretty much everything you do is online, you don't need much in the way of software support, and you want to spend around $300, rather than thousands? 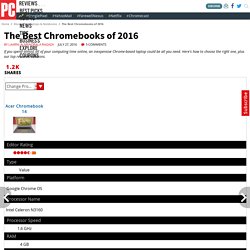 A chromebook could be your answer. These inexpensive laptops may not offer a full Windows experience, but their Web-centric operation and low, low prices make them perfect for light-usage social media and Web-based productivity. If you spend more than 90 percent of your computer time in a Web browser, you should have no trouble using a chromebook as your primary PC. Chromebooks typically don't have much in the way of impressive hardware, but they also rarely need it.

Because you'll be visiting websites and running programs all from Chrome OS, which is basically a souped-up version of the Chrome Web browser, the technical barrier to entry is low. ASUS Chromebook Flip C100PA. Asus Chromebook Flip review. Chromebooks have come along way from their cheap, plasticky days. 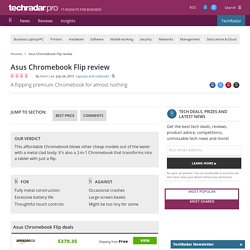 In fact, most modern models are attractive in their own right. The Samsung Chromebook 2 introduced a leatherette finish, and who could forget the aluminum-clad Chromebook Pixel 2. Meanwhile, the Dell Chromebook 11 and Acer Chromebook C740 are battle hardened for school. And even the Acer Chromebook 15 gussies up its plastic exterior with a textured finish. Now, the Asus Chromebook Flip C100 ($249 or about £160, AU$337) is looking to be the first downright stunning cloud-based laptop. This is by far the sleekest Chromebook yet, with a completely metal shell and thin profile.

Internally, this Chromebook also flips the script with an ARM processor from Rockchip when practically every machine before it has used an Intel chip. Design The fully metal construction of this Chromebook is a pleasant surprise given its low, low price. More than meets the eye. Choosing the Right Digital Learning Device. Published Online: June 10, 2015 Published in Print: June 11, 2015, as Device Decisions Revolve Around Grade-Level Needs By Robin L. 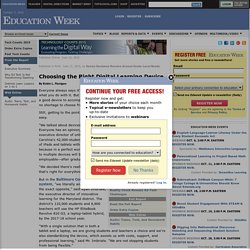 Flanigan Everyone always says it's not about the device, it's what you do with it. But the truth is, educators need a good device to accomplish their goals, and there's no shortage to choose from. Still, getting to the point of purchase is far from easy. "We talked about devices on and on and on and on. "We decided there's really no one device that's right for everything," she said. But in the Baltimore County school system, "we literally and firmly believe the exact opposite," said Ryan Imbriale, the executive director of innovative learning for the Maryland district.

"With a single solution that is both a tablet and a laptop, we are giving students and teachers a choice and we're also standardizing the device, which assists us with costs, support, and professional learning," said Mr. Sometimes, that vision needs to narrow in on the smallest details. Google for Education: Start learning right out of the box. Back to School: 5 Best Laptops and Tablets. 7 big mistakes K-12 education needs to avoid in 1:1 computing plans. After spending a number of years working in the educational tech sector, I can safely pinpoint the two camps that make up the meandering discussion about 1:1 computing plans for K-12 education today. 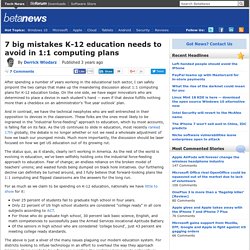 On the one side, we have eager innovators who are determined to place a device in each student's hand -- even if that device fulfills nothing more than a checkbox on an administrator's 'five year outlook' plan. And in contrast, we have the technical neophytes who are well entrenched in their opposition to devices in the classroom.

These folks are the ones most likely to be ingrained in the "industrial force-feeding" approach to education, which by most accounts, is falling flat on its face. As the US continues to slide in education, most recently ranked 17th globally, the debate is no longer whether or not we need a wholesale adjustment of how we teach our youngest minds. 5 Devices for K–12 One-to-One Initiatives. Texas’s Leander Independent School District started down the one-to-one computing path by talking first to curriculum staff and teachers to learn more about the tools their students needed for more effective and engaging digital learning. 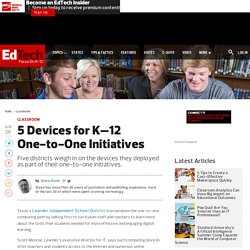 Scott Monroe, Leander’s executive director for IT, says such computing devices offer teachers and students access to the Internet and numerous online educational tools and applications. Because math, science and language arts typically have different needs when it comes to device function, the district opted for a convertible notebook from Lenovo. “We felt the device gave teachers and students the option to run the system the way they felt was best,” Monroe says. By choosing convertible notebooks over desktops or even traditional notebooks, the district ultimately can eliminate computer labs, dramatically cutting IT costs, he adds.