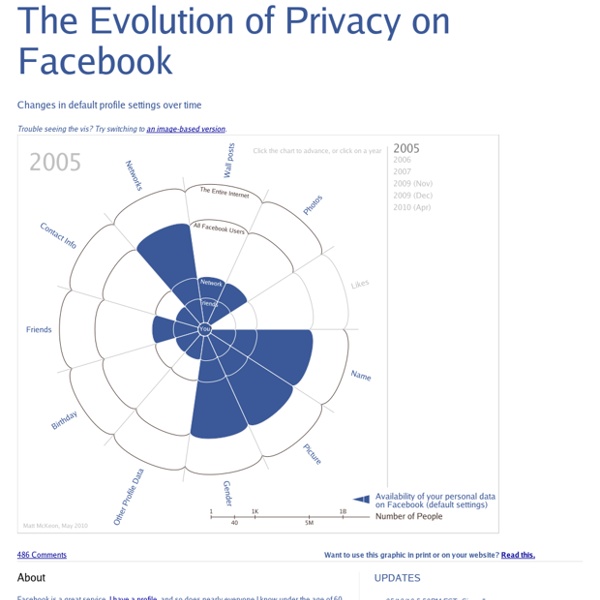 About Facebook is a great service. I have a profile, and so does nearly everyone I know under the age of 60. However, Facebook hasn't always managed its users' data well. In the beginning, it restricted the visibility of a user's personal information to just their friends and their "network" (college or school). Over the past couple of years, the default privacy settings for a Facebook user's personal information have become more and more permissive. This blog post by Kurt Opsahl at the the EFF gives a brief timeline of Facebook's Terms of Service changes through April of 2010. Let me be clear about something: I like Facebook. Data The data for this chart was derived from my interpretation of the Facebook Terms of Service over the years, along with my personal memories of the default privacy settings for different classes of personal data. I welcome data corrections, so please leave a comment below if you have better numbers to share. Types of Personal Data Audiences Implementation About me

Does Facebook Hurt Relationships? [INFOGRAPHIC] Last year, more Facebook users changed their status to single than in a relationship — 24 percent versus 31 percent. That juicy tidbit counts among many that lie in this infographic on how Facebook affects our relationships, rendered by our friends at Online Dating University. Only three out of every five users show their relationship statuses at all, and such listings appear more frequently among Facebookers in the U.S., South Africa, Iceland, the U.K. and Canada. Let us know in the comments section what you think about these statistics and the other facts appearing in the infographic below.

Can Ben Silbermann Turn Pinterest Into The World's Greatest Shopfront? For a guy running such a beautiful website, Ben Silbermann looks like hell: He has prominent bags under tired, watery eyes; his shoulders hang heavy; his shirt is wrinkled; and his dark hair is uncombed. When he speaks--with the open-vowel inflections of his Iowa upbringing--his voice is so slight that it often gets lost beneath the din of other conversations. When he moves, it is with the economy of a marathon runner trying to conserve every last bit of energy on the eve of a big race. "I’m tired," says the 30-year-old CEO of Pinterest, the social scrapbook that’s the hottest website on the planet, as he prepares to shovel down a bowl of noodles a few feet away from his desk. Silbermann leaves for the office at 7 a.m. most mornings and works nonstop until dinner. His only respite, if you can call it that, comes in the predawn hours when he takes his newborn son, Max, into his arms and fires up his laptop to check email.

8 ways to enhance your Spotify experience - TNW Apps Whether you’re a brand new user who’s just signed up today in the US, or you’ve been a member for years, here are 6 ways to make Spotify an even better music service. If you’re looking for the basics, see our beginner’s guide to Spotify. Spotibot Spotify’s built-in music discovery side isn’t that hot. Luckily, and that’s where Spotibot comes in. This service offers a range of features that use Last.fm data to help you find music you’ll love.

The first thing you should do is set up two-step verification Apple's newest operating system for Macs, called Mountain Lion, allows more non-Apple applications to take advantage of Documents in the Cloud. That means you can store stuff like Word documents and Excel spreadsheets in your account. Make sure that Documents & Data is checked in the iCloud sync settings we showed you in Slide 1. Most Facebook Apps Can Post Behind Your Back [EXCLUSIVE] How many apps have you installed on Facebook? More importantly, how many of them could post something in your name right now, without your knowledge? Chances are, it's more than half of them. Privacy protection company Secure.me analyzed some 500,000 Facebook apps, and shared the results exclusively with Mashable.

Facebook Effect on Grades Social media has several effects on academic work — some more positive than others. But what is social networking's overall impact on college students' performance? According to data gathered from several sources by OnlineEducation.net, Facebook and Twitter are used to great benefit — sometimes. An Autopsy of a Dead Social Network Friendster is a social network that was founded in 2002, a year before Myspace and two years before Facebook. Consequently, it is often thought of as the grand-daddy of social networks. At its peak, the network had well over 100 million users, many in south east Asia. In July 2009, following some technical problems and a redesign, the site experienced a catastrophic decline in traffic as users fled to other networks such as Facebook. Friendster, as social network, simply curled up and died. This is the company that famously turned down a $30m buyout offer from Google in 2003.

Hotmail releases new security features to protect users Often a user’s worst enemy when it comes to security is their own self, provided they employ weak passwords and allow their email account to become hacked. Hotmail is out to protect its users from hurting themselves with two new features that it announced today: A feature that allows users to quickly report a friend’s account as hacked, and a tool that will block users from employing common passwords. The first feature is actually somewhat intelligent, and will allow people who receive suspicious email from a friend to report the sending account as hacked. In other words, if your friend never tried to sell you v!

Identity Theft & Credit Card Fraud – How to Protect Yourself - Personal Finan... Identity theft occurs when someone obtains your personal information, such as your credit card data or Social Security number, to commit fraud or other crimes. The Federal Trade Commission estimates that 9 million Americans suffer identity theft annually. It sounds like a big number, but it isn’t. For one, the hysteria has been stoked by much-publicized data breaches. In reality, identity theft only touches a sliver of the U.S. population each year (about 3%). One-quarter of those cases are credit-card fraud and not full-blown identity theft, according to FTC figures.

Facebook Will Use Customer Email, Phone to Target Advertising - Peter Kafka - Media Twitter is not the only social network tweaking its ad targeting program. Facebook says it will start letting marketers find prospects on the social network by using personal information like phone numbers and email addresses. The catch: In order for a company to track a Facebook user using any of that data, the Facebook user has to have already given the company that data on their own. Or to put it another way: Facebook is letting marketers hunt down existing customers on the site. InsideFacebook first reported the development this morning, and Facebook now says it will be rolling out the targeting option widely next week.

Google+ Vs. Facebook Privacy [Exclusive Infographic] These days most of us spend a lot of time on social sites like Facebook and Google+, but how often do we stop to think about privacy? Unfortunately, not as often as we probably should. In a new infographic shared exclusively with Social Times, PEER 1 Hosting explores the privacy settings on both Facebook and Google+ and reveals that even if we have our privacy settings in place we may not be as protected as we think we are.