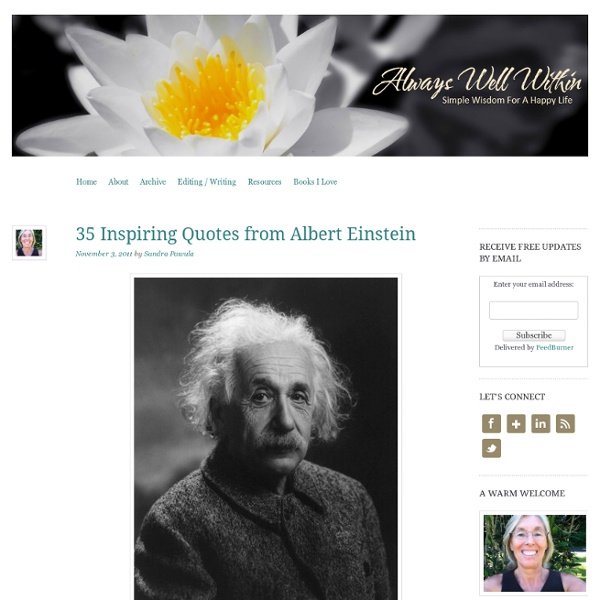 Albert Einstein (March 14, 1879 – April 18, 1955), the famous theoretical physicist, developed the theory of relativity and is considered the father of modern physics. The nuclear physicist Robert Oppenheimer shared his impressions of Einstein by saying, “He was almost wholly without sophistication and wholly without worldliness . . . There was always with him a wonderful purity at once childlike and profoundly stubborn.” Due to his brilliance Einstein was often called upon to offer opinions on topics beyond the realm of physics; thus the wide range of inspired quotations. “Few are those who see with their own eyes and feel with their own hearts.” “Everything should be as simple as it is, but not simpler.” “Try not to become a man of success, but rather try to become a man of value.” “Not everything that can be counted counts, and not everything that counts can be counted “Great spirits have always encountered violent opposition from mediocre minds.” “Anger dwells only in the bosom of fools.”

Einstein for everyone Back to main course page John D. Norton Department of History and Philosophy of Science University of Pittsburgh Here are the questions that were asked in the description in the course catalog... www.catb.org/~esr/fortunes/liberty Love your country, but never trust its government. -- Robert A. Heinlein. % "The power to tax involves the power to destroy;...the power to destroy may defeat and render useless the power to create...." -- Chief Justice John Marshall, 1819. % "Rightful liberty is unobstructed action, according to our will, within limits drawn around us by the equal rights of others." -- Thomas Jefferson % Sometimes it is said that man cannot be trusted with the government of himself. Can he, then, be trusted with the government of others? -- Thomas Jefferson, in his 1801 inaugural address % A wise and frugal government, which shall restrain men from injuring one another, which shall leave them otherwise free to regulate their own pursuits of industry and improvement, and shall not take from the mouth of labor the bread it has earned.

Humanity Healing International “Until he extends his circle of compassion to include all living things, man will not himself find peace.” ~ Albert Schweitzer 1. Acceptance and practice of the philosophy of the interconnection and interrelation among all living and sentient beings. 21 Habits of Happy People - Global One TV Contributed by Cindy Holbrook “Happiness is a habit – cultivate it.” ~ Elbert Hubbar Happiness is one aspiration all people share. No one wants to be sad and depressed. We’ve all seen people who are always happy – even amidst agonizing life trials.

Why Socialism? By Albert Einstein "We shall require a substantially new manner of thinking if mankind is to survive." Why Socialism? By Albert Einstein From Monthly Review, New York, May, 1949. [Re-printed in Ideas and Opinions by Albert Einstein] Transcribed by Lenny Gray Is it advisable for one who is not an expert on economic and social issues to express views on the subject of socialism? Using Apostrophes to Show Possession Apostrophes are those little curved marks you see hanging from certain letters. They look harmless enough, so why do even well educated people throw them where they don't belong and leave them out where they're needed? Until apostrophes disappear from English altogether, you can take one step toward apostrophe reform by perfecting the art of showing possession. Most other languages are smarter than English. To show possession in French, for example, you say the pen of my aunt

Inspiration and Chai For many years I worked in palliative care. My patients were those who had gone home to die. Some incredibly special times were shared. I was with them for the last three to twelve weeks of their lives. People grow a lot when they are faced with their own mortality. I learnt never to underestimate someone's capacity for growth. Wisdom & Quotes by Confucius » Wisdom of the Ancient Sages « Articles & Wisdom Confucius 551-479 BC Chinese Philosopher Famous Quotes "When we see men of worth, we should think of equaling them; when we see men of a contrary character, we should turn inwards and examine ourselves."

8 Things Everybody Ought to Know About Concentrating “Music helps me concentrate,” Mike said to me glancing briefly over his shoulder. Mike was in his room writing a paper for his U.S. History class. On his desk next to his computer sat crunched Red Bulls, empty Gatorade bottles, some extra pocket change and scattered pieces of paper. 50 Life Hacks to Simplify your World Life hacks are little ways to make our lives easier. These low-budget tips and trick can help you organize and de-clutter space; prolong and preserve your products; or teach you something (e.g., tie a full Windsor) that you simply did not know before. Most of these came from a great post on tumblr. There is also a great subreddit ‘r/lifehacks‘ with some fantastic tips as well. 20. Separate egg yolks like a boss

Getting to Grips with English: Taking Possession : Where does that possessive apostrophe go? One of the most asked questions that we get at english4today.com is about the placement of the apostrophe for possessives. This is a 'young' blog so I'm going to answer it here for Trish Upham from Australia who writes: I am a Virtual Assistant working with lawyers and regularly come across the problem of multiple possessives in legal documents. For instance, when a group of people is buying a company, none of us can agree on the correct way to type something like "Smith, Dunn, & Bradstreet's ownership".

The Top of My Todo List April 2012 A palliative care nurse called Bronnie Ware made a list of the biggest regrets of the dying. Her list seems plausible. 11 Stephen Hawking Quotes for His 71st Birthday When Stephen Hawking was diagnosed with motor neurone disease at age 21, doctors thought he'd only survive a few more years. But the theoretical physicist defied the odds: Hawking turns 71 today. Here are 11 quotes from the Director of Research at the Centre for Theoretical Cosmology at Cambridge and author of A Brief History of Time. Happy birthday, professor! 7 Lessons From 7 Great Minds - Global One TV - StumbleUpon Have you ever wished you could go back in time and have a conversation with one of the greatest minds in history? Well, you can’t sorry, they’re dead. Unless of course you’re clairaudient, be my guest. But for the rest of us, we can still refer to the words they left behind. Even though these great teachers have passed on, their words still live, and in them their wisdom. I’ve made a list of seven what I believe are some of the greatest teachings by the world’s greatest minds.