If a Dog Were Your Teacher 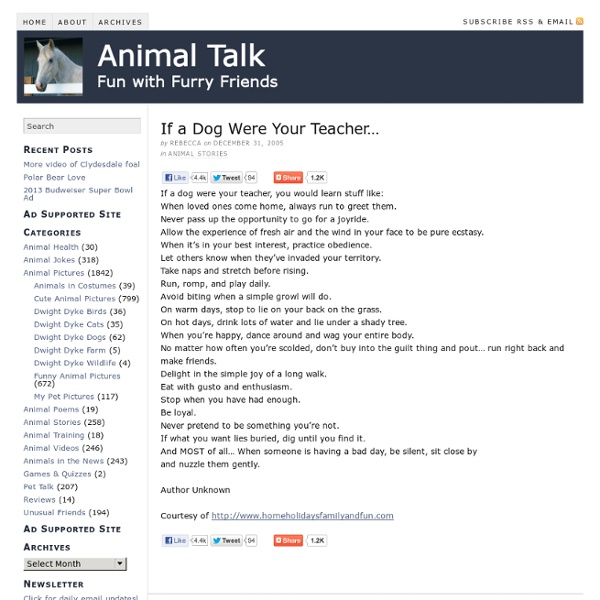 Snooki Quotes Snooki Rolling Stone Pictures Episode 13 | Finale I am so excited because we are going to see the crocadillies. That Doggie in the Window is $1.5 Million: Red Tibetan Mastiff World’s Most Expensive Dog - Animal News A coal baron from China now owns the world’s most expensive dog, a red Tibetan mastiff named Big Splash or Hong Dong in Chinese. He shelled out 10 million Chinese yuan, or about $1.5 million, for the pricey pet, which is seen as a status symbol in China. Read more at the Daily Mail. Big Splash’s breeder says that the 11-month-old mastiff is the perfect specimen, justifying his high price tag.

Biggest dog in the world: Meet George the 7ft long Great Dane... who's terrified of chihuahuas By Dave Nasser Created: 23:16 GMT, 22 July 2011 The first time we saw George, our beloved Great Dane, he was no more than a tiny, cowering ball of fuzzy fur. As my wife Christie opened the door of the crate he’d travelled in, he teetered to a standing position and looked out at us, moving his head slowly from side to side, taking in the wonder of it all. Finally, as if weighing us up and deciding we were acceptable, he tentatively pushed his little nose forward and gave Christie her first lick. A Dog’s Purpose According To A 6 Year Old May 24, 2011 | 70 Comments » | Topics: Dog, Heartwarming, Writing Being a veterinarian, I had been called to examine a ten-year-old Irish wolfhound named Belker. The dog’s owners, Ron, his wife, Lisa, and their little boy, Shane, were all very attached to Belker, and they were hoping for a miracle. I examined Belker and found he was dying of cancer. I told the family we couldn’t do anything for Belker, and offered to perform the euthanasia procedure for the old dog in their home.

Dalai Lama’s 18 rules for living lifestyle Take into account that great love and great achievements involve great risk. When you lose, don’t lose the lesson. Follow the three Rs: Respect for selfRespect for othersResponsibility for all your actions.Remember that not getting what you want is sometimes a wonderful stroke of luck.Learn the rules so you know how to break them properly.Don’t let a little dispute injure a great friendship.When you realize you’ve made a mistake, take immediate steps to correct it. Sad Story With A Happy End It pleases me to know that world still has some good souls left! Related Posts Instant Dog Mom Luxurious place for cats Top 10 Animal Dads Headline Grabbing Animal stories of 2013

Why &034;Outdoor Dogs&034; Are Miserable - Vetstreet What compels people get a dog only to keep it isolated outside, away from the family? I have often wondered this as I walk my dogs down streets lined with fences behind which lonely outdoor dogs bark as we go by. I don't know what they look like and can only guess their size by the deepness of their voices. But I know what the lives of these dogs are too often like. They are animals born to be part of a social structure, a pack or a family, yet this is denied them. 50 really useful iPad 2 tips and tricks An absolute gem of an article by John Brandon and Graham Barlow from MacLife on 30th March over at TechRadar. This is going to become my iPad manual from here on in. Customised iPads for all 100 inspirational quotes to celebrate 100 blog posts 100 quotes - to inspire, challenge, encourage, remind, enlighten, reassure, soothe, and delight. In celebration of 100 blog posts at Always Well Within! Many thanks to my wonderful readers and subscribers. It’s such a privilege and a joy to write for you.

Laika - the first animal in space Romanian stamp from 1959 with Laika (the caption reads "Laika, first traveller into Cosmos") Laika (Russian: Лайка, meaning "Barker"; c. 1954 – November 3, 1957) was a Soviet space dog who became one of the first animals in space, and the first animal to orbit the Earth. As little was known about the impact of spaceflight on living creatures at the time of Laika's mission, and as the technology to de-orbit had not yet been developed, there was no expectation of Laika's survival. Some scientists believed humans would be unable to survive the launch or the conditions of outer space, so engineers viewed flights by animals as a necessary precursor to human missions.[1] Laika, a stray dog from the streets of Moscow, was originally named Kudryavka (Russian: Кудрявка Little Curly). She underwent training with two other dogs, and was eventually selected to be the occupant of the Soviet spacecraft Sputnik 2 that was launched into outer space on November 3, 1957. Sputnik 2[edit]

100 Essential iPad Tips and Tricks Change the way the default apps and the operating system behave, to make them suit your particular needs. You’ll also discover ways to squeeze more functionality out of the default apps. The guys over at tcgeeks.com have put together another great article on the iPad. Where many articles before have focused on the settings and technical aspects of getting the most from your iPad, this article is really about customising your ipad. The iPad is an incredibly versatile device that can enhance your life in many different ways but all iPads behave identically when you first get them out of the box. That’s no reason for us to use our gadgets in the same way as everyone else.

11 Most Important Philosophical Quotations 1. “The unexamined life is not worth living” – Socrates (470-399 BCE) Socrates’ [wiki] belief that we must reflect upon the life we live was partly inspired by the famous phrase inscribed at the shrine of the oracle at Delphi, “Know thyself.” The key to finding value in the prophecies of the oracle was self-knowledge, not a decoder ring. Socrates felt so passionately about the value of self-examination that he closely examined not only his own beliefs and values but those of others as well.