Sometimes All You Need Is A Little Inspiration to Keep Rolling 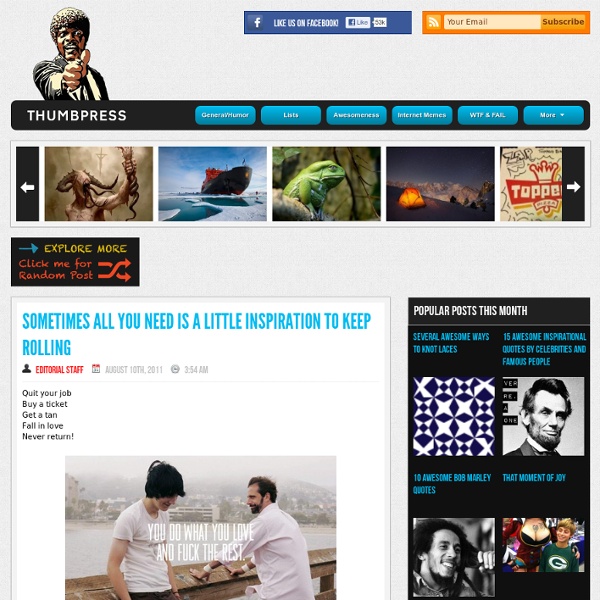 8 Things Everybody Ought to Know About Concentrating “Music helps me concentrate,” Mike said to me glancing briefly over his shoulder. Mike was in his room writing a paper for his U.S. History class. The Geek’s Guide to Getting Almost Anything for Free Does it pay to be Internet savvy? Yes. In more ways than many people imagine. Sure, the Internet is a great way to research just about anything you could ever want to know about; and it’s an outstanding communication, marketing, and entertainment tool.

31 Things I've Learned in 31 Years If you think he likes you, you're probably right. If you think he's cheating, you're probably right. If you think she's going to be your new BFF, (this time with feeling!) Stoicism School of Hellenistic Greek philosophy Stoicism is a school of Hellenistic philosophy which was founded by Zeno of Citium, in Athens, in the early 3rd century BC. Stoicism is a philosophy of personal ethics informed by its system of logic and its views on the natural world. According to its teachings, as social beings, the path to eudaimonia (happiness) for humans is found in accepting the moment as it presents itself, by not allowing oneself to be controlled by the desire for pleasure or fear of pain, by using one's mind to understand the world and to do one's part in nature's plan, and by working together and treating others fairly and justly. Stoicism flourished throughout the Roman and Greek world until the 3rd century AD, and among its adherents was Emperor Marcus Aurelius.

Inspirational Quotes Inspiration is exactly what I need right now. I found myself in search of some inspirational quotes to pin up in my office, and thought I would share some of them with you. I’ve been having a rough time of it lately. I have been dealing with some health issues and have been feeling quite sorry for myself. I’ve been doing the whole why me thing and have finally come to the following realization…Why not me? Top five regrets of the dying There was no mention of more sex or bungee jumps. A palliative nurse who has counselled the dying in their last days has revealed the most common regrets we have at the end of our lives. And among the top, from men in particular, is 'I wish I hadn't worked so hard'. Bronnie Ware is an Australian nurse who spent several years working in palliative care, caring for patients in the last 12 weeks of their lives. She recorded their dying epiphanies in a blog called Inspiration and Chai, which gathered so much attention that she put her observations into a book called The Top Five Regrets of the Dying. Ware writes of the phenomenal clarity of vision that people gain at the end of their lives, and how we might learn from their wisdom.

Mod Podge Shoes My husband jokes every time I get the bottle of Mod Podge out that I’m going to Mod Podge fabric to our computer keys or Mod Podge our kids clothing to their bodies. Hey, don’t tempt me. I know, I may go a little overboard with this stuff…….but I just had to try it on some shoes. Originally, I saw the idea on a site my sister showed me. And the lady Mod Podged starburst wrappers to some shoes. It was cute…….but I wanted to try fabric. If The World Consisted of 100 People... What if there were only 100 of us? What would be the breakdown demographically based on the way the world population is shaped today? If the Earth population were a small community of 100 people, it would look something like this: A Terrific 2012: Top 15 Inspirational Pictures to Start New Year on a Positive Note There are times when life punches down everybody. But Rocky isn’t the only one who can get back up again. With the right amount of inspiration, you can soldier on, no matter how tough things get.

Dalai Lama on our time This is also the age where consciousness is raising due to cultural collisions and every human being has the power to transcend the mundane identity. This might be the best diagnosis of the disease ever written, but you have the cure. Anyone who has had the opportunity to go against the grain of this ‘world greed trend’ and stand up for the heart knows that the power is in each of us to overcome this world.