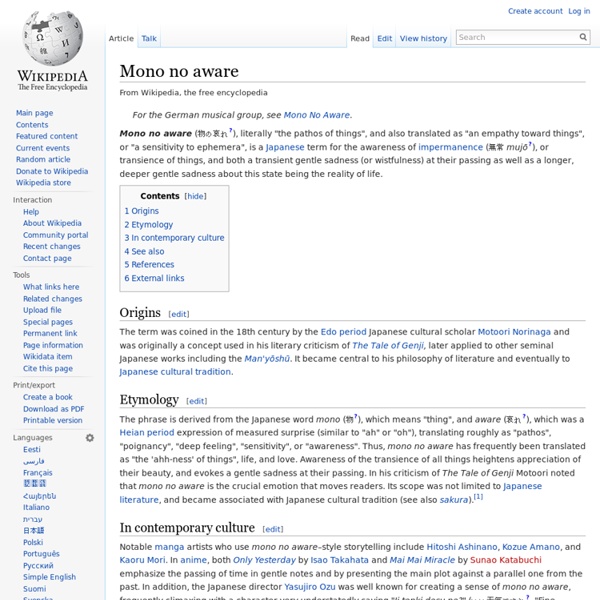 Mono no aware (物の哀れ?), literally "the pathos of things", and also translated as "an empathy toward things", or "a sensitivity to ephemera", is a Japanese term for the awareness of impermanence (無常, mujō?), or transience of things, and both a transient gentle sadness (or wistfulness) at their passing as well as a longer, deeper gentle sadness about this state being the reality of life. Origins[edit] The term was coined in the 18th century by the Edo period Japanese cultural scholar Motoori Norinaga and was originally a concept used in his literary criticism of The Tale of Genji, later applied to other seminal Japanese works including the Man'yōshū. Etymology[edit] The phrase is derived from the Japanese word mono (物?) In contemporary culture[edit] In his book about courtly life in ancient Japan, The World of the Shining Prince, Ivan Morris compares mono no aware to Virgil's term lacrimae rerum, Latin for "tears of things".[2] See also[edit] References[edit] External links[edit]

Wabi-sabi A Japanese tea house which reflects the wabi-sabi aesthetic in Kenroku-en (兼六園) Garden Wabi-sabi (侘寂?) represents a comprehensive Japanese world view or aesthetic centered on the acceptance of transience and imperfection. The aesthetic is sometimes described as one of beauty that is "imperfect, impermanent, and incomplete".[1] It is a concept derived from the Buddhist teaching of the three marks of existence (三法印, sanbōin?), specifically impermanence (無常, mujō?) Description[edit] "Wabi-sabi is the most conspicuous and characteristic feature of traditional Japanese beauty and it occupies roughly the same position in the Japanese pantheon of aesthetic values as do the Greek ideals of beauty and perfection in the West".[1] "If an object or expression can bring about, within us, a sense of serene melancholy and a spiritual longing, then that object could be said to be wabi-sabi The words wabi and sabi do not translate easily. Modern tea vessel made in the wabi-sabi style Western use[edit]

Three marks of existence The Three marks of existence, within Buddhism, are three characteristics (Pali: tilakkhaṇa; Sanskrit: trilakṣaṇa) shared by all sentient beings, namely: impermanence (anicca); suffering or unsatisfactoriness (dukkha); non-self (Anatta). There is often a fourth Dharma Seal mentioned:[citation needed] Together the three characteristics of existence are called ti-lakkhana in Pali or tri-laksana in Sanskrit. By bringing the three (or four) seals into moment-to-moment experience through concentrated awareness, we are said to achieve wisdom—the third of the three higher trainings—the way out of samsara. Thus the method for leaving samsara involves a deep-rooted change in world view. Anicca[4][edit] [Pronounced Anitcha/Anitya] All compounded phenomena (things and experiences) are inconstant, unsteady, and impermanent. Dzongsar Jamyang Khyentse Rinpoche states that in the four seals of the Mahayana, Nirvana should be viewed as "beyond extremes". Dukkha[edit] Anatta[edit] See also[edit] Buddhism

Average Faces From Around The World Added on Feb 08, 2011 / Category : StrangeNews / 228 Comments Finding the average face of people across the world was a tough job but someone had to do it. This guy basically takes a thousands and thousands images of everyday people from any city and the software makes an 'average' of the people, giving one final portrait. If you like this article, Share it with the world: Praxe Coimbra's Queima das Fitas parade. Nearly graduated medicine (orthodontology in this particular case) students and their decorated float. Freshman being "baptized" by older students An increasingly larger number of institutions organize alternative initiation events for the freshmen based on solidarity activities and community work - it is called "Solidarity Praxis" (Praxe Solidária).[5][6][not in citation given] History[edit] Academic outfit[edit] The outfit's cloak is traditionally not washed, as such represents the giving up of the memories of the academic life and it can be torn whenever something exceptionally important occurs to the wearer.[7] The cloak is also used to show respect to places one is in or a person someone is in the presence of, and the maximum demonstration of academic respect is the laying down of the cloak on the ground for someone to walk on top of.[7][not in citation given] Controversies[edit] Criticism[edit] Judicial proceedings[edit] See also[edit] References[edit]

Question #5: What is Desenrascanço? Desenrascanço is one of the features that Portuguese people are famous for. The Wikipedia page of Desenrascanço, unfortunately was ripped off, but miraculously I managed to recover parts of them, even the picture that illustrated the Desenrascanço. Here it goes: Desenrascanço (loosely translatable as "disentanglement") is a Portuguese word used, in common language, to express an ability to solve a problem without having the knowledge or the adequate tools to do so, by use of imaginative resources or by applying knowledge to new situations. However, some critics disagree with the association of the concept of desenrascanço with the mainstream Portuguese culture. Universities Desenrascanço has a role in the academic juvenile sub-culture in most educational institutions. The older students at universities and politechnical institutes known as doutores (Eng. doctors) teach Desenrascanço to freshmen (Port. Normal academic activities are also seen as a way to teach desenrascanço.

Ghosts, Spirits and Demons in Chinese Religion 14.6KGoogle + Spirits in Chinese Religion Burning ghost money on the streets of Taiwan. Photo: Arion Potts. Ghost money, which is burned as offerings to the spirits of the dead. In Chinese thought, the world is populated by a vast number of spirits, both good and evil. Evil spirits are believed to avoid light, so many rituals involving fire and light have developed, such as the use of bonfires, firecrackers, and torches. But not all spirits are evil — some are just unhappy. If a spirit is not kept happy, perhaps because it had a bad death, an improper burial or has no descendents to perform the proper rituals, it becomes a ghost (sometimes called a "hungry ghost," a term with Buddhist origins). Ghosts receive the most attentions during Ghost Month, the seventh month in the Chinese lunar year, and especially during the Ghost Festival on the fiftteenth day. In mainland China, belief in ghosts and evil spirits is declining under the influence of atheistic Communism. References David K.

William Gilpin (priest) William Gilpin (4 June 1724 – 1804) was an English artist, Anglican cleric, schoolmaster and author, best known as one of the originators of the idea of the picturesque. Gilpin was born in Cumberland, the son of Captain John Bernard Gilpin, a soldier and amateur artist. From an early age he was an enthusiastic sketcher and collector of prints, but while his brother Sawrey Gilpin became a professional painter, William opted for a career in the church, graduating from Queen's College, Oxford in 1748. While still at Oxford, Gilpin anonymously published A Dialogue upon the Gardens ... at Stow in Buckinghamshire (1748). Part guidebook to Stowe, part essay on aesthetics, this shows that Gilpin had already begun to develop his ideas on the picturesque. After working as curate, Gilpin became master, and from 1755 headmaster, at Cheam School. In contrast to other contemporary travel writers, such as Thomas Pennant, Gilpin included little history, and few facts or anecdotes.