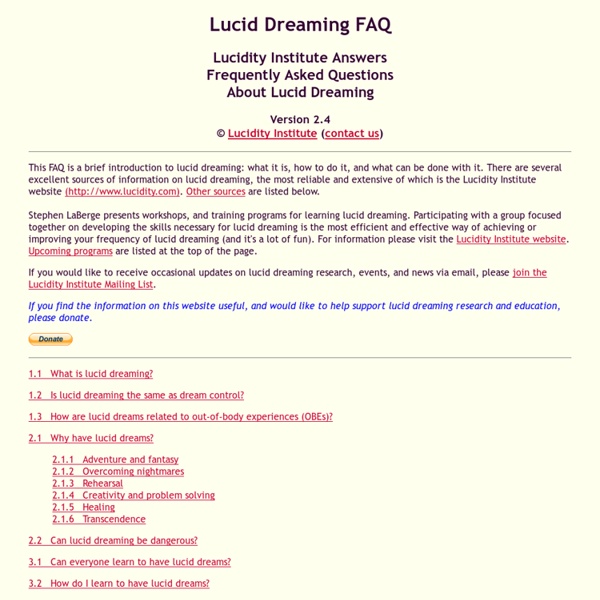 Ajit Vadakayil: BEEJ MANTRA , ANUSWARAM NASAL SOUND , PRIMORDIAL LONGITUDINAL WAVE SOUND FREQUENCY – CAPT AJIT VADAKAYIL The sign of OM is the sign of Hinduism. It is the first and foremost of all mantras. Mantra is the sound body of consciousness. OM is considered as the sound of cosmic energy and contains all the sounds in itself. The spiritual efficacy of OM is heard, not by the ears but by the heart . How to Achieve Unshakable Confidence The Dalai Lama says that nothing can ever be accomplished without confidence in yourself, but which ‘self’ should you have confidence in? your personality, your abilities, your intelligence? Or is there something greater to put your trust and confidence in?

Color Psychology by David Johnson Like death and taxes, there is no escaping color. It is ubiquitous. Yet what does it all mean? Why are people more relaxed in green rooms? Can B6 Keep Me Awake At Night? Insomnia by Smiley Stew People interested in their dreams have long noted the fascinating relationship between Vitamin B6 and dreams. My own interest in dreams is no exception: one of the earliest blog posts I ever wrote about documented my dream reports after taking B6. Synsepalum dulcificum The berry itself has a low sugar content[7] and a mildly sweet tang. It contains a glycoprotein molecule, with some trailing carbohydrate chains, called miraculin.[8][9] When the fleshy part of the fruit is eaten, this molecule binds to the tongue's taste buds, causing sour foods to taste sweet. At neutral pH, miraculin binds and blocks the receptors, but at low pH (resulting from ingestion of sour foods) miraculin binds protons and becomes able to activate the sweet receptors, resulting in the perception of sweet taste.[10] This effect lasts until the protein is washed away by saliva (up to about 60 minutes).[11] The names miracle fruit and miracle berry are shared by Gymnema sylvestre and Thaumatococcus daniellii,[2] which are two other species of plant used to alter the perceived sweetness of foods. History[edit]

Heart of Hinduism: Doctrine: Sankhya and Yoga Kapila, who founded the school of Sankya. Some Hindus claim there were two Kapilas, teaching theistic and atheistic versions of this doctrine. Sankhya, derived from the word meaning "to count," is a philosophical system of analysing matter established by Kapila. It aims to overcome suffering through cultivating discrimination and by releasing the soul (purusha) from its entanglement in matter (prakriti). Scholars say that it was originally a non-theistic system delineating 24 material truths (or elements), with the soul as the 25th.

School of Meditation The Spirituals Ways are groups within the School of Meditation where every Initiate develops specific points of interest, according to their aspirations and talents. How to Draw Ears For a video version of this tutorial visit www.proko.com/how-to-draw-ears-anatomy-and-structure In this tutorial I will go over the parts of the ear and suggest an easy way to remember all these complex shapes. At the end, I will show a step by step of an ear drawing. Basic Forms The simplified volume of the ear is very much like a megaphone.

Review of Galantamine: the Lucid Dreaming Pill So you’re considering the red pill… Galantamine has emerged as THE lucid dreaming pill. This natural supplement has been used for centuries in China as a memory enhancer, and was even noted by the ancient Greeks for its powerful mind-inducing effects. Now we know that galantamine indirectly promotes dreaming sleep as well as lucid dreaming, which is the art of becoming self-aware in your dreams. There’s a lot of hype about galantamine, so I want to cover the basics about how it works on the brain, the studies that have proven its effectiveness, and my personal recommendations for experimentation with this safe and natural supplement. Penne with Vodka Sauce Recipe : Giada De Laurentiis Directions Simmer the tomato sauce and vodka in a heavy large skillet over low heat until the mixture reduces by 1/4, stirring often, about 20 minutes. Stir the cream into the tomato and vodka sauce. Simmer over low heat until the sauce is heated through.

Mysterious Rays of Light Began Radiating From The Pyramids Around The World NASA and the European Space Agency have been warning the world for two years about the approaching catastrophes that may unfold during 2015 to 2016. Although NASA covered up the strange photon cloud that’s now enveloped the solar system, the word has leaked out from some scientists. And now, as the ominous cloud approaches it’s affecting the sun and planets in measurable ways. Amazingly, as the bizarre energy invades our space, some of the world’s most famous pyramids are generating intense energy. Several incredible incidents of visible power beams shooting skywards into space towards the region of the alien photonic cloud are well-documented.

7 Ways Spiritual People Can Bullsh*t Themselves (And The Cure) Who’s more in alignment with their path of spiritual evolution? A person sitting in a lotus position, taking deep breaths and in perfect composure?Or a person curled up in a ball, crying hysterically? If we base ourselves on everything we have learned from “new age” philosophies and most spiritual teachings out there, I think it’s fair to say that the person meditating wins. He appears peaceful, at ease and above negative emotions. Now I’m not about to “shock” you and say that the truth is actually the opposite.