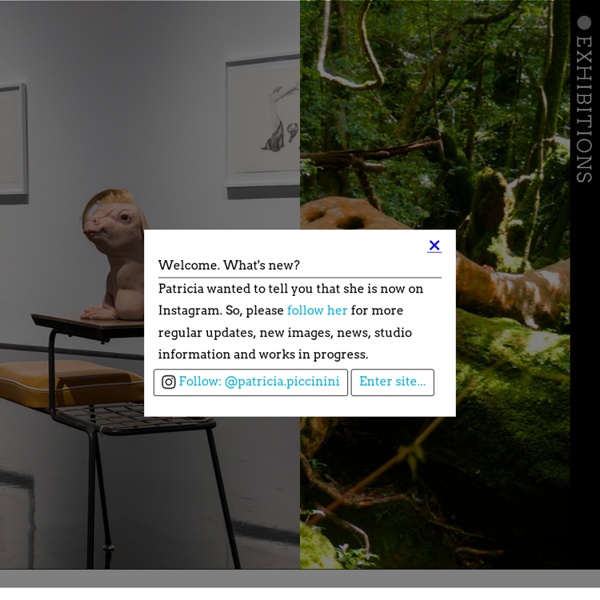 Mona » Gilbert & George The Art Exhibition The artists' first Australasian retrospective will showcase ninety-seven pictures from 1970 to 2014, obliging a view of the modern world through the lens of their distinctive compositions. Is Tassie ready for them, and are they for Tassie? You may be offended by this exhibition. HUMUMENT.COM - The Official Site of A HUMUMENT by Tom Phillips Introduction Fifth edition 2012 A Humument started life towards noon on November 5th (Guy Fawkes Day) 1966 at a propitious place. Austin's Furniture Repository stood on Peckham Rye where William Blake saw his first angels and which Van Gogh must have passed once or twice on his way to Lewisham. As usual on a Saturday morning Ron Kitaj and I were prowling the huge warehouse in search of bargains.

Sun Circle by Gerard Tsutakawa - Auburn, Washington - Abstract Public Sculptures on Waymarking.com Sun Circle by Gerard Tsutakawa - Auburn, Washington Posted by: Hikenutty Guerrilla Girls Guerrilla Girls are an anonymous group of feminist, female artists devoted to fighting sexism and racism within the art world. The group formed in New York City in 1985 with the mission of bringing gender and racial inequality in the fine arts into focus within the greater community. Members are known for the gorilla masks they wear to remain anonymous. They wear the masks to conceal their identity because they believe that their identity is not what matters as GG1 explains in an interview "...mainly, we wanted the focus to be on the issues, not on our personalities or our own work.

Directors « Flatline Todd Fuller Todd Fuller is a 25 year old graduate of Sydney’s National Art School. His practice integrates sculpture, animation, drawing, performance and painting to construct narratives drawn from his personal history. SHOWcabinet: Prosthetics exhibition Fetishistic suits of armour, orthopaedic braces and wearable tusks all feature in an exhibition of prosthetics at the SHOWcabinet space in London (+ movie). Curated by Niamh White and Carrie Scott of fashion film website SHOWstudio, the exhibition opened on Thursday and contains pieces intended to enhance, protect or deform the body. The name of the showcase derives from the Ancient Greek word "prosthesis", which means "to add", but the collection also incorporates the modern understanding of prosthetics as replacement limbs. Above: Fragmented Figure by Úna Burke Designer Úna Burke created original pieces for the show made from leather straps joined with rivets, which encase limbs like a suit of armour. Above: RE.TREAT #4 by Úna Burke

The 10 Most Memorable Artist Collaborations For her contribution to the Manchester International Festival, Tracey Emin has announced plans for a collaboration with Louise Bourgeois, who she describes as her “hero” in a recent Guardian op-ed. To get past the hurdle of Bourgeois no longer being alive, Emin will employ a close reading of Hans Ulrich Obrist’s 2004 tome Do It, in which 165 venerated artists provided instructions on how to reproduce their work. Even though the results will fit the definition of collaboration narrowly — a far cry from the genuine two-woman jobs that Hauser & Wirth exhibited in 2011 — the idea of seeing both minds at work is intriguing, and, given the tone of Emin’s op-ed, pretty damn poignant.

Portraits Of Extreme Plastic Surgery, Done In Classical Style (NSFW) There are two ways most people interpret A New Kind Of Beauty, a book of photographs by Phillip Toledano that documents proponents of extreme cosmetic surgery. First, there’s revulsion: “the expected ‘Holy shit! These people look crazy,’ which definitely isn’t the point of the work,” the British photographer tells Slate. “And then there are hopefully some people who understand the point I’m making about the direction we’re headed.”