Self Defined Self Management: How We're Figuring It Out. When I got my first job, it never occurred to me that there was more than one way to work. 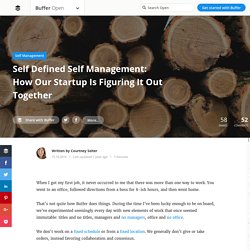 You went to an office, followed directions from a boss for 8-ish hours, and then went home. That’s not quite how Buffer does things. During the time I’ve been lucky enough to be on board, we’ve experimented seemingly every day with new elements of work that once seemed immutable: titles and no titles, managers and no managers, office and no office. We don’t work on a fixed schedule or from a fixed location. We generally don’t give or take orders, instead favoring collaboration and consensus. The move to self management So when we stumbled upon the book Reinventing Organizations by Frederic Laloux, we were intrigued. We made a lot of changes, including dropping all titles, stopping all official coaching and mentorship, and letting each teammate choose the goals and projects they wanted to work on (and what they wanted to pay themselves).

It was a unique time to be at Buffer, to say the least. InterTwinkles: Twinkling all over the InterWebs. FLOX Teams. The Shift from Open Platforms to Digital Commons - Commons Strategies. David Bollier Universitat de Oberta Catalunya — Open University of Catalonia — just published the following essay of mine as part of its “Open Thoughts” series. 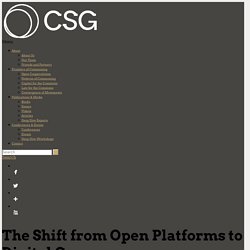 The UOC blog explores the benefits and limitations of various forms of peer production: well worth a look! From open access platforms to managed digital commons: that is one of the chief challenges that network-based peer production must meet if we are going to unleash the enormous value that distributed, autonomous production can create. The open platform delusion We are accustomed to regarding open platforms as synonymous with greater freedom and innovation. In this sense, many open platforms are not so benign. Such outcomes on “open platforms” should not be entirely surprising; they represent the familiar quest of capitalist markets to engineer the acquisition of exclusive assets and monetize them.

There are other reasons to move to commons-based platforms. Towards the CopyFair license The potential of the blockchain. Hyper Island Toolbox. Holacracy, Explained: An Illustrated Guide to Management-Free Organizations - Page19. Have you heard about Holacracy? If you’re watching the startup and tech scene, then there’s a pretty good chance you have. Holacracy is a management-free way to run a company. It’s been around for a few years, but it may have come to your attention just recently when its inventor, Brian Robertson, released a book on the concept. Another place you might have recently heard about Holacracy is in the media when Tony Hsieh, Zappos CEO, asked his employees to either fully buy in to the company’s holacracy initiative or take their leave (along with a nice little bonus to sweeten the exit).

Even before all the media buzz, we at Blinkist were fascinated with Holacracy. One thing that we noticed along the way is that there’s a huge breach between how simple and efficient Holacracy can make work and how not simple it is to understand. At Blinkist, we have a few years and nearly 1,000 business-books’-worth of experience making complex content accessible. 1. Share this Share this 2. Share this 4. I'm Sorry, But Agile Won't Fix Your Products. This article is by Adam Pisoni, co-founder and former CTO of Yammer. 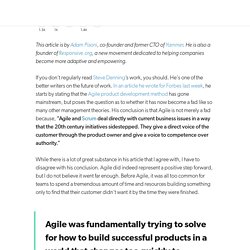 He is also a founder of Responsive.org, a new movement dedicated to helping companies become more adaptive and empowering. While there is a lot of great substance in his article that I agree with, I have to disagree with his conclusion. Agile did indeed represent a positive step forward, but I do not believe it went far enough. Before Agile, it was all too common for teams to spend a tremendous amount of time and resources building something only to find that their customer didn’t want it by the time they were finished.

Agile was fundamentally trying to solve for how to build successful products in a world that changes too quickly to predict what people want and how best to build it for them. For context, I’ve either been a full-time software developer or leading teams of developers from 1995 to 2014, except for a brief hiatus after the first dot-com bubble burst. What’s the alternative? Liquid Organisation - How we've invented LiquidO™ and why you should care. Way We Work — Medium Engineering.