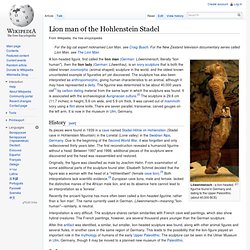 (about 40,000 BCE) A lion-headed figure, first called the lion man (German: Löwenmensch, literally "lion human"), then the lion lady (German: Löwenfrau), is an ivory sculpture that is both the oldest known zoomorphic (animal-shaped) sculpture in the world, and the oldest known uncontested example of figurative art yet discovered. The sculpture has also been interpreted as anthropomorphic, giving human characteristics to an animal, although it may have represented a deity. Ice Age <i>Lion Man</i> is world’s earliest figurative sculpture. Exhibitions Museums News United Kingdom Work carved from mammoth ivory has been redated and 1,000 new fragments discovered—but it won’t make it to British Museum show By Martin Bailey. 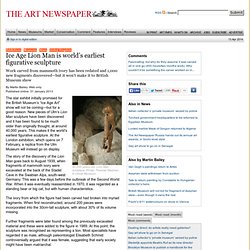 Web onlyPublished online: 31 January 2013 40,000 years old: Lion Man sculpture. Lion Man of the Hohlenstein Stadel. More than 30 000 years ago, at the beginning of the upper paleolithic age, the suebian mountains have been part of the living area of the early anatomically modern humans (Homo sapiens sapiens). 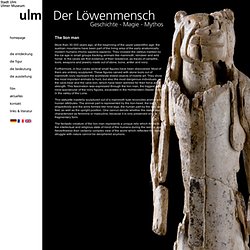 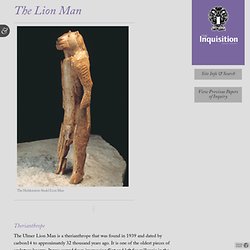 It is one of the oldest pieces of sculpture known. It was carved from ivory using flint and left for millennia in the Swabian Alps in Germany where it resurfaced just to prior to the outbreak of war. Its form follows the curve of a mammoth’s tooth. The figure is not conclusively definable as male or female. New Life for the Lion Man. Using recently uncovered fragments, archaeologists may be able to finally piece together one of the world’s oldest works of art For more than 70 years, archaeologists have been piecing together the “lion man” out of mammoth ivory fragments unearthed in a southern German cave. 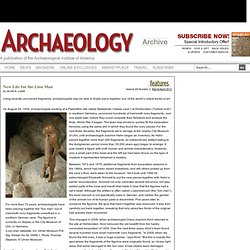 The figurine is currently on display in the City Museum of Ulm, in Germany. (Lion-man statuette, Inv. Ulmer Museum Prä Slg. The lion man of hohlenstein stadel. The Lion Man of Hohlenstein-Stadel: Mystery from the Stone Age. The Lion Man (or sometimes Lion Woman) of Hohlenstein-Stadel is possibly the strangest and most enigmatic artifact to come down to us from the Aurignacian culture of the Upper Paleolithic. 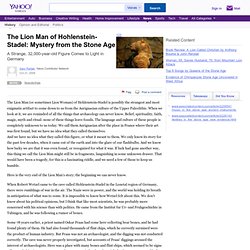 When we look at it, we are reminded of all the things that archaeology can never know. Belief, spirituality, faith, magic, myth and ritual- none of these things leave fossils. The language and culture of these people is completely unknown to us today. We call them Aurignacian after the place in France where their art was first found, but we have no idea what they called themselves. And we have no idea what they called this figure, or what it meant to them. Homepage. Ice Age <i>Lion Man</i> is world’s earliest figurative sculpture. Remotedevice.net. Burke. Stonehenge. Stonehenge is surely Britain's greatest national icon, symbolizing mystery, power and endurance. 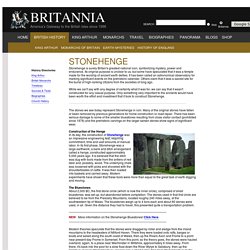 Its original purpose is unclear to us, but some have speculated that it was a temple made for the worship of ancient earth deities. It has been called an astronomical observatory for marking significant events on the prehistoric calendar. Stonehenge. Interesting Theories and Facts About Stonehenge and Its Mysteries. Found in Salisbury Plain, England, the Stonehenge is an iconic prehistoric monument that continues to mystify even the most renowned archeologists and researchers today. 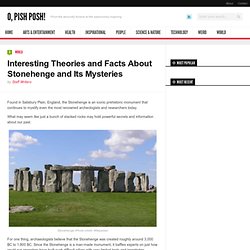 What may seem like just a bunch of stacked rocks may hold powerful secrets and information about our past. Stonehenge (Photo credit: Wikipedia) For one thing, archaeologists believe that the Stonehenge was created roughly around 3,000 BC to 1,800 BC. Since the Stonehenge is a man-made monument, it baffles experts on just how could our ancestors have built such difficult pillars with very limited tools and knowledge. 5 Strange Theories About Stonehenge. Thousands of years ago, an ancient civilization raised a circle of huge, roughly rectangular stones in a field in what is now Wiltshire, England. 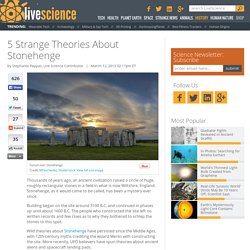 Stonehenge, as it would come to be called, has been a mystery ever since. Building began on the site around 3100 B.C. and continued in phases up until about 1600 B.C. Stonehenge — History.com Articles, Video, Pictures and Facts. According to the 12th-century writer Geoffrey of Monmouth, whose tale of King Arthur and mythical account of English history were considered factual well into the Middle Ages, Stonehenge is the handiwork of the wizard Merlin. 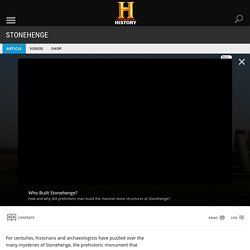 In the mid-fifth century, the story goes, hundreds of British nobles were slaughtered by the Saxons and buried on Salisbury Plain. Hoping to erect a memorial to his fallen subjects, King Aureoles Ambrosias sent an army to Ireland to retrieve a stone circle known as the Giants’ Ring, which ancient giants had built from magical African bluestones. The soldiers successfully defeated the Irish but failed to move the stones, so Merlin used his sorcery to spirit them across the sea and arrange them above the mass grave. Legend has it that Ambrosias and his brother Uther, King Arthur’s father, are buried there as well. Stonehenge - Guide for visitors. Aliens? After reading the construction of stonehenge, I was hung up, wondering how the prehistoric monument was built without advanced engineering knowledge nor sophisticated tools. This same question has been baffling historians and archaeologists alike for centuries. Stonehenge took nearly 1,500 years to build and was believed to be constructed between 3000 and 2000 BC.

Aliens. Why were Stonehenge built? Forget what you have seen on National Geographic about the Stonehenge, and what you have read in your high school books about this 9th wonder of the world. Why were Stonehenge built? This is one question I am clearly going to answer without giving hints and bits by leading you to my sci-fi books. Jomon pot. From Japan, early Jōmon period, about 5,000 BC Skill in pottery has been an important defining aspect of Japanese culture from earliest time. There are pottery fragments from Aomori in northern Japan which date from about 14,500 BC, and are believed to be among the oldest yet discovered anywhere in the world.

Tuc d'Audoubert. Hieronymusburgh. Art history fall '13 - Home. Greg Lynn: Organic algorithms in architecture. Google Image Result for. Roman Painting. The history of Roman painting is essentially a history of wall paintings on plaster. Jerusalem's Mysterious Well of Souls. New Van Gogh Painting Discovered. Hide captionAlex Ruger, director of the Van Gogh Museum in Amsterdam, at the unveiling Monday of Vincent Van Gogh's Sunset at Montmajour. Olaf Kraak /AFP/Getty Images. Apollo 11 Notes. Apollo 11 Plaque. Callanish Stones. The Callanish Stones (or "Callanish I", Clachan Chalanais or Tursachan Chalanais in Gaelic) are an arrangement of standing stones placed in a cruciform pattern with a central stone circle. They were erected in the late Neolithic era, and were a focus for ritual activity during the Bronze Age.