Collection here is a work in progress.
Several items are echoes of other PearlTree users.

Emoticons Flags Version history 1.2.6: Added Malthe, Tauri, and Priidu from Skype 5. Removed Amazon banner ad and added the +1 button. 2011-09-05. 1.2.5: New Amazon Affiliate banner. Share give. Social Technology for Purposeful Organization. The Cooperation Instinct. Nowak and Sigmund regarded Axelrod’s work as an elegant exercise of mathematics but wanted to change the game so that it applied more directly to specific questions in evolution. 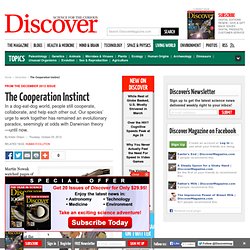 The classic Darwinian theory of natural selection suggests that individuals who cooperate threaten their own evolutionary fitness, since cooperation always involves a cost to the self (the vampire bat that shares blood has less food for itself). Still, life is full of cooperation, from the single cells that joined to form higher organisms to the construction of cities by humans and intricate communal nests by ants. If cooperation exists so widely, Nowak wondered, what mechanisms were at work to increase cooperation when natural selection seemed to argue against it?

A paper published in Nature in 1976 by Lord Robert May, a British physicist who has made notable contributions to theoretical biology, introduced some new ideas for changing the game and teasing out those mechanisms. Using Emergence to Scale Social Innovation, by Margaret Wheatley and Deborah Frieze. In spite of current ads and slogans, the world doesn't change one person at a time. 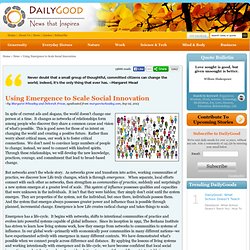 It changes as networks of relationships form among people who discover they share a common cause and vision of what's possible. This is good news for those of us intent on changing the world and creating a positive future. Rather than worry about critical mass, our work is to foster critical connections. We don't need to convince large numbers of people to change; instead, we need to connect with kindred spirits. Through these relationships, we will develop the new knowledge, practices, courage, and commitment that lead to broad-based change. But networks aren't the whole story. Emergence has a life-cycle. Why we need to understand networks Researchers and social activists are beginning to discover the power of networks and networking. Structure. 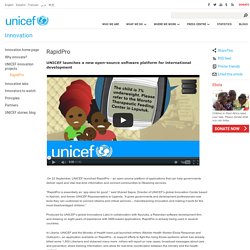 “RapidPro is essentially an ‘app store for good’,” said Sharad Sapra, Director of UNICEF’s global Innovation Center based in Nairobi, and former UNICEF Representative to Uganda. “It gives governments and development professionals new tools they can customize to connect citizens and critical services – mainstreaming innovation and making it work for the most disadvantaged children.” Produced by UNICEF’s global Innovations Labs in collaboration with Nyuruka, a Rwandan software development firm, and drawing on eight years of experience with SMS-based applications, RapidPro is already being used in several countries. “We find ideas and solutions conceived at the grassroots,” Sapra added. Kindling Idea Management.

Collabbit. IdeaTorrent. Crowdbrite. Collaborative Decision-Making. Social Media. It's Complicated. Creating Bottom-Up Tech Tools to Fight Ebola. Liberian youths flash their mobile phones in support of UNICEF's U-Report (UNICEF Liberia) The fight against Ebola in West Africa is far from over even if media attention has waned. 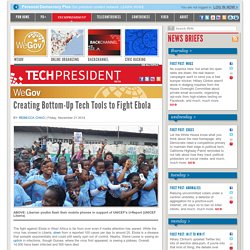 While the virus has slowed in Liberia, down from a reported 100 cases per day to around 20, Ebola is a disease that spreads exponentially and could still easily spin out of control. Nearby, Sierra Leone is seeing an uptick in infections, though Guinea, where the virus first appeared, is seeing a plateau. Overall, 14,000 have been infected and 500 have died. Dr. While technology can help better coordinate volunteer recruitment and facilitate the donations of staff, stuff and space, what it does best is the fourth: systems. Systems for Early Detection One of the most crucial aspects of stemming Ebola is contact tracing. ACT is a platform that digitizes the process of contact tracing through interactive voice response (IVR) to track outbreaks in real time and anticipate where the virus will appear next. The Communicating with Disaster Affected Communities Network.

The CDAC Network: On the Ground In 2014 the CDAC Network was awarded a landmark grant by the UK Government’s Department for International Development (DFID) to establish communicating with communities (CwC) as a predictable and resourced component of humanitarian response. 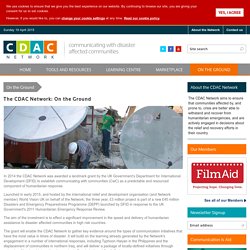 Launched in early 2015, and hosted by the international relief and development organisation (and Network member) World Vision UK on behalf of the Network, the three year, £3 million project is part of a new £40 million Disasters and Emergency Preparedness Programme (DEPP) launched by DFID in response to the UK Government's 2011 Humanitarian Emergency Response Review. The aim of the investment is to effect a significant improvement in the speed and delivery of humanitarian assistance to disaster affected communities in high risk countries. The grant will enable the CDAC Network to gather key evidence around the types of communication initiatives that have the most value in times of disaster.