Building a dictionary for an economics of the commons. Lifezones By Peter Halasz [CC-BY-SA-2.5-2.0-1.0 ], via Wikimedia Commons This is a proposal in response to “Help us build a dictionary on commons economics!” 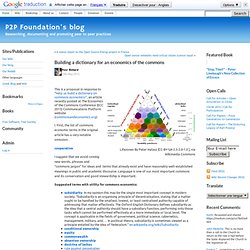 , an article recently posted at The Economics of the Commons Conference (ECC 2013) Communications Platform website (commonsandeconomics.org) I. First, the list of commons economic terms in the original article has a very notable omission: cooperative I suggest that we avoid coining new words, phrases and “commons jargon” for ideas and terms that already exist and have reasonably well-established meanings in public and academic discourse. Suggested terms with utility for commons economics: II. Below is a graphic of the GoodRelations e-comerce vocabulary (click to enlarge in another window). At the most basic level, such a diagram would allow us to hyperlink each term to a standard definition such as those given in the UNITED NATIONS METADATA COMMON VOCABULARY.

(click on the image for an enlarged view) Lists of other ontologies: Now Journal. Ed. 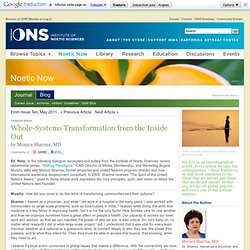 Note: In the following dialogue, excerpted and edited from the Institute of Noetic Sciences’ recent teleseminar series, “Shifting Paradigms,” IONS Director of Media, Membership, and Marketing Angela Murphy talks with Monica Sharma, former physician and United Nations program director and now international leadership development consultant. In 2009, Sharma received "The Spirit of the United Nations Award,” given to those whose work expresses the core principles, spirit, and vision on which the United Nations was founded. Murphy: How did you come to do this work of transforming communities and their cultures?

Sharma: I trained as a physician, and while I did work in a hospital in the early years, I also worked with communities on large-scale problems, such as tuberculosis in India. I am not a number. This Guest Blog is from Laura Redhead, a Teach First participant who teaches in a secondary school in Liverpool. 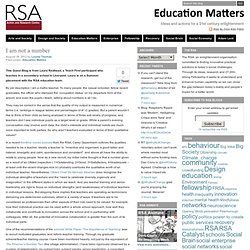 Laura is on a Summer placement with the RSA education team. By job description I am a maths teacher. To many people: the casual onlooker, fellow recent graduates, the officer who stamped the ‘occupation status’ on my departure form at the airport, and even the pupils I teach, talking about numbers is all I do. They may be correct in the sense that the quality of my output is measured in numerical terms (i.e. rankings in league tables and percentages of A*-C grades). But a parent wouldn’t like to think of their child as being analysed in terms of three sub-levels of progress, and teachers don’t see individual pupils as a target level or grade. In a recent frontline voices podcast from the RSA, Carey Oppenheim outlines the qualities needed to be a teacher. During my time at the RSA, I have observed how innovative and creative ideas can be put into practice. Comments. Lunchbox/Soapbox: David Holmgren on Retrofitting the Suburbs for Sustainability.

The Conversation: David Holmgren, co-founder of permaculture movement - By Design - ABC Radio National. FAST News - Strategy implementation disciplines, Animated meetings & Conference keynotes with punch. Hi there, To help you get up to full steam in 2012, we offer you resources and opportunities to better implement your strategy, enhance your meeting effectiveness, increase the impact of your conference Keynote, and develop your personal leadership through re-connection with nature. 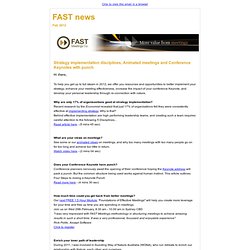 Why are only 17% of organisastions good at strategy implementation? Recent research by the Economist revealed that just 17% of organisations felt they were consistently effective at implementing strategy. Why is that? Behind effective implementation are high performing leadership teams, and creating such a team requires careful attention to the following 5 Disciplines... Read article here - (5 mins 45 sec) What are your views on meetings? See some or our animated views on meetings, and why too many meetings with too many people go on for too long and achieve too little in return. Watch video here - (2 mins 04 sec) Does your Conference Keynote have punch? L.php?u=http%3A%2F%2Ftransitionculture. L.php?u=http%3A%2F%2Freneweconomy.com.

Tom Morello has a message for Obama on Real Time with Bill Maher. The Secret of Reality.