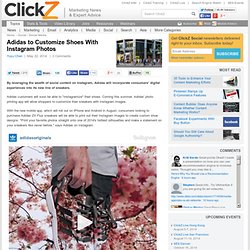 Adidas customers will soon be able to "Instagramize" their shoes. Coming this summer, Adidas' photo printing app will allow shoppers to customize their sneakers with Instagram images. With the new mobile app, which will roll out on iPhone and Android in August, consumers looking to purchase Adidas ZX Flux sneakers will be able to print out their Instagram images to create custom shoe designs. The app is part of Adidas' mi adidas project, where customers can customize their shoes with different colors and personalized logos. Miller Lite launches first tweet-to-win promotion to fuel TV content. MillerCoors-owned Miller Lite is banking on consumers sharing all of their beer-guzzling photos on Twitter this summer for the brand’s first tweet-to-win contest. 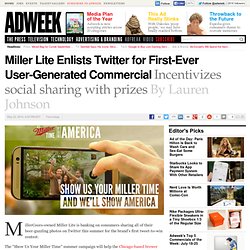 The "Show Us Your Miller Time" summer campaign will help the Chicago-based brewer create content that will then be used in a television commercial this fall. While the campaign includes Twitter and Facebook components, Twitter is a bigger focus in reaching the brand's demographic of guys aged 22 – 27 years old, per Cris Rivera, senior brand manager at MillerCoors.

"This is completely new for us to run a program like this via Twitter," Rivera told Adweek. "We’re trying to capture the natural behavior that is already happening. " Miller Lite is asking consumers to follow the brand on Twitter and tweet a picture of themselves with either its product or logo that is tagged with the #ItsMillerTime hashtag. Beer fans can submit their photos until August 14 and the commercial will roll out on August 15. Evidence of #social media influence. Mil. Twitter's Redesign Makes the Platform Ripe for Recruitment. The Society for Human Resource Management recently found that more than 75% of companies use social networking sites to recruit job candidates — and recruiters are often going beyond professionally oriented platforms like LinkedIn. 66% of recruiters use Facebook for discovering talent, and 54% of recruiters turn to Twitter when vetting candidates. 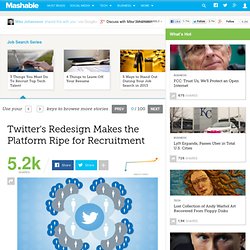 With Twitter’s redesign, that number is likely to increase. Twitter is already an inherently ripe social network for recruiting because of its huge professional audience and the unrestricted access it offers members to one another. Twitter Fail: NYPD's social media outreach campaign backfires. Infographic: How Important Is Customer Service In Customer Experience? : Page 1 of 1. The 17 Most Important Questions I have been Asked about Social Media. Social media’s rise has surprised many pundits with its rapid growth and the demise of platforms like Twitter has been predicted by many of its critics. 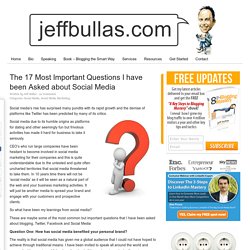 Social media due to its humble origins as platforms for dating and other seemingly fun but frivolous activities has made it hard for business to take it seriously. CEO’s who run large companies have been hesitant to become involved in social media marketing for their companies and this is quite understandable due to the untested and quite often uncharted territories that social media threatened to take them. In 10 years time there will not be ‘social media’ as it will be seen as a natural part of the web and your business marketing activities. It will just be another media to spread your brand and engage with your customers and prospective clients.

How to Build a Trending Hashtag: 3 Questions To Ask Before Starting. Vanessa Doctor December 26, 2013 If you plan to have a successful hashtag, you should first know the basic rules on how to come up with the right keywords as well as the techniques that will drive the right individuals to the conversation. 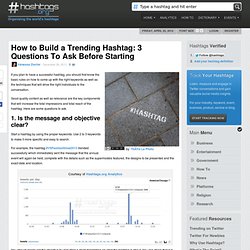 Good quality content as well as relevance are the key components that will increase the total impressions and total reach of the hashtag. Here are some questions to ask. 1. Is the message and objective clear? Start a hashtag by using the proper keywords. For example, the hashtag #VSFashionShow2013 trended successfully which immediately sent the message that the annual event will again be held, complete with the details such as the supermodels featured, the designs to be presented and the exact date and location. Which day is best to send emails? By Daniel Burstein, Director of Editorial ContentTo be overly broad for a moment, effective email marketing essentially comes down to three elements:What should you send? 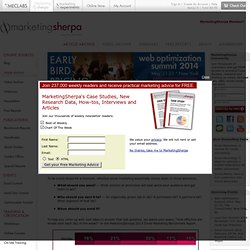 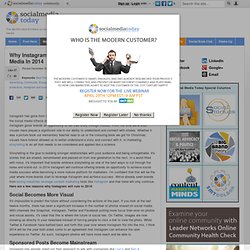 It's quickly challenging the social media trifecta of Facebook, Twitter and LinkedIn through photo sharing in a mobile world. Instagram gives brands an opportunity to tell their story through visuals. From the time we're kids, visuals have played a significant role in our ability to understand and connect with stories. Age of disruption. China and climate change Amanda Oborne is having trouble sleeping at night. 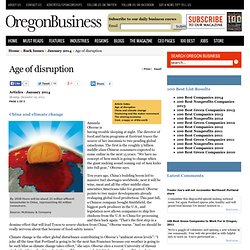 The director of food and farm programs at Ecotrust traces the source of her insomnia to two pending global cataclysms. The first is the roughly 3 billion middle-class Chinese consumers expected to come online in the next 15 years. “We have no concept of how much is going to change when the giant sucking sound coming out of Asia kicks into full gear,” Oborne says. Ten years ago, China’s building boom led to massive fuel shortages worldwide; next it will be wine, meat and all the other middle-class amenities Americans take for granted.

Starbucks 'Tweet-a-Coffee' Campaign Prompted $180,000 in Purchases. A Starbucks program that lets consumers buy coffee for friends on Twitter, has prompted about $180,000 in purchases to date since it launched in late October, according to a researcher. 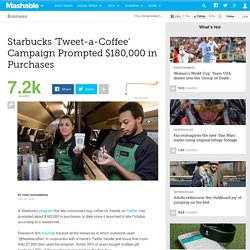 Research firm Keyhole tracked all the instances in which someone used "@tweetacoffee" in conjunction with a friend's Twitter handle and found that more than 27,000 fans used the program. Some 34% of users bought multiple gift cards and 32% of the purchases occurred on the first day. Launched on Oct. 28, Tweet-a-Coffee let you give a $5 gift card to a friend by putting both "@tweetacoffee" and the friend's handle in a tweet. To do so, users had to link their Starbucks account to Twitter and their credit card to the account. Saif Ajani, co-founder of Keyhole, says $180,000 is a respectable return on investment since the program probably required a low investment. How a small e-commerce site attracted 293,000 Facebook fans. India Leads Worldwide Social Networking Growth. Growth in the number of social network users around the world may be slowing, but it shows little sign of stopping, based on eMarketer’s latest forecast of internet, broadband and social network users worldwide. 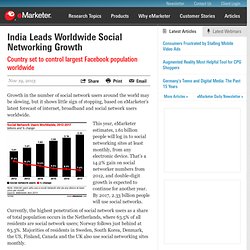 The Year of Social? Call 2014 the year of “social acceptance.” More marketers are committing budget to paid social media advertising. And social media companies are providing advertisers better targeting than ever, and more ways to see the return on investment, according to a new eMarketer report, “Social Media Advertising: Seven Trends for 2014.” Facebook’s efforts in 2013 to simplify and prove the effectiveness of its ad products paved the way for future growth in spending. And as a mobile platform, Facebook has delivered scale and efficiency and will continue to pull mobile dollars in 2014. Twitter, which went public this month, will continue its push for brand dollars by partnering with TV networks. Firms Face Challenges in Digital Transformation.

Technology—at least in the abstract—holds a great deal of promise for companies: greater efficiency and even new ways of conducting business. But the flip side is the need for both resource investment and near-constant upkeep to yield results. The MIT Sloan Management Review and Capgemini Consulting conducted a survey of executives and managers in a variety of industries worldwide to gauge their feelings on technology as it related to their businesses. They found that companies faced a variety of challenges in adopting new digital technologies.

Fifty-three percent of respondents said the top cultural barrier to digital transformation was competing priorities. An almost equal number of respondents, 52%, said they were stymied by a lack of familiarity with digital technologies. The study also concluded that companies faced a challenge in determining what returns a digital overhaul might yield. Dr4ward.com/ Q&A: Regence's Don Antonucci on how he uses Twitter - Portland Business Journal. Syria Visualizations Illustrate Complexity and Division. Since U.S. intelligence and U.N. inspectors found evidence that the largest chemical weapons attack in 25 years occurred in Syria, the world has quickly divided over how to respond to this new information. While journalists and security experts have likened America’s decision to intervene in the conflict to operations in Iraq in 2003 or 1993, or the U.S. intervention in Kosovo, the growth of the internet, social media and the wealth of available public information on Syria means that Americans have access to more data about this conflict than any other.

Maintaining a blog that does more than run press releases and product promos is hard. How Digital Behavior Differs Among Millennials, Gen Xers and Boomers. While internet usage is nearly ubiquitous in the US, mobile phone and mobile internet usage are taking a far greater role in digital activity among consumers of all ages—and uptake is poised for further growth. eMarketer estimates that overall, 75.7% of the population goes online at least monthly, and penetration is even higher among younger demographic groups.

The 3 types of content that drive Disney's blog. Even if you do everything else right, your content marketing effort is doomed if your content doesn't appeal to your audience. For several years, to illustrate this point I have shown the Disney Parks blog. The blog is authored by 100 Disney Parks staffers, from its CEO to front-line employees. Initially offering seven or eight posts per week, the blog now boasts that many every day. Marketers' list growth tactics. In the 2013 Email Marketing Benchmark Report, an overwhelming 50% of our surveyed marketers indicated their lists were on a "somewhat positive" trend, with slowly growing lists.

Brands Leverage Influencers' Reach on Blogs, Social. Top brands spend a limited amount of time reaching out to influencers for marketing purposes, but these individuals—generally bloggers or social media users with a greater than average reach among consumers—still have a significant presence in the marketplace. Hashtags. Multimedia Software. 10 Reasons Why You (May) Suck on Twitter. Don't Buy – Share: How Collaborative Consumption Opens the Door to New Business Models and a Sustainable Lifestyle.

What Are Four Things You Need To Know About Protecting Your Online Reputation. Do We Need New Metrics for Social? Yes, And Here's Why.