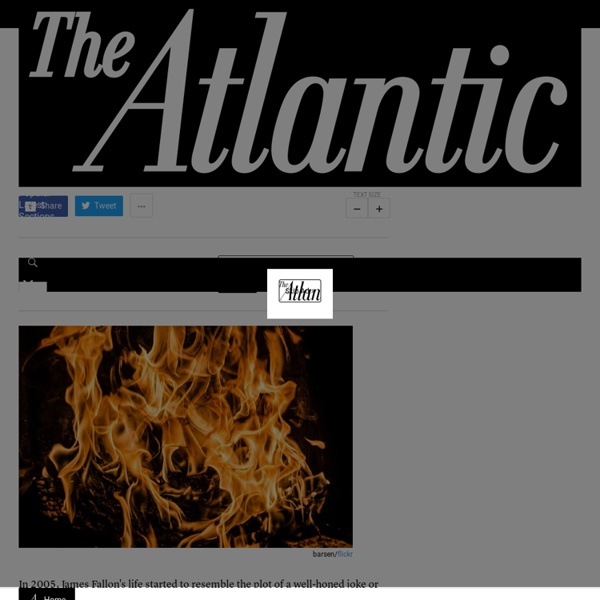 In 2005, James Fallon's life started to resemble the plot of a well-honed joke or big-screen thriller: A neuroscientist is working in his laboratory one day when he thinks he has stumbled upon a big mistake. He is researching Alzheimer's and using his healthy family members' brain scans as a control, while simultaneously reviewing the fMRIs of murderous psychopaths for a side project. It appears, though, that one of the killers' scans has been shuffled into the wrong batch. The scans are anonymously labeled, so the researcher has a technician break the code to identify the individual in his family, and place his or her scan in its proper place. When he sees the results, however, Fallon immediately orders the technician to double check the code. After discovering that he had the brain of a psychopath, Fallon delved into his family tree and spoke with experts, colleagues, relatives, and friends to see if his behavior matched up with the imaging in front of him. What has that involved?

This Is Anxiety - James Hamblin "If you can't do something perfectly, why do it at all?" Stories from Atlantic readers on how to think about anxiety, what is helpful, and what isn't. "Here’s what’s worked: nothing." Scott Stossel writes with resignation in the cover article for the current issue of The Atlantic, "Surviving Anxiety." The Atlantic editors invited readers to send in stories of their own experiences with anxiety. We got so many interesting submissions, and there was even more that I wanted to share than is here. I'd like these to mostly speak for themselves, but I will call out a couple recurring points. Unlike Stossel, many people have found that certain treatments, behaviors, and ways of thinking about their anxiety can be helpful. It started when I was eight after my great aunt had passed; seeing her in the open casket freaked me out. My heart was beating so fast and I was breaking out in a cold sweat. David McCann Akron, Ohio It is reassurance that I'm still alive. J.W. Catie Toronto 1. 2. 3. 4. 5.

Mark Rubinstein: New Psychiatric Disorders and Their Social Side Effects The American Psychiatric Association has just published the DSM-5 (Diagnostic and Statistical Manual of Mental Disorders, Fifth Edition). Added to the psychiatric disorders previously named (minus a few), the manual lists 15 new disorders ranging from caffeine withdrawal syndrome to restless legs syndrome along, with hoarding disorder and premenstrual dysphoric disorder. Controversies surround the new manual. The new manual incorporates Asperger's Disorder into autism spectrum disorder. Some mental health professionals have expressed concern the new manual has spun out of control, and is now diagnosing people who formerly would have been viewed as "the worried well." Those defending the new manual point out that some diagnoses have been eliminated or combined, while others have been added, thereby resulting in no real increase in the number of psychiatric conditions. The DSM manual is so important because mental health professionals use it as the "bible" of the diagnostic lexicon.

Suicidal behaviour is a disease, psychiatrists argue - health - 17 May 2013 Read full article Continue reading page | 1 | 2 As suicide rates climb steeply in the US a growing number of psychiatrists are arguing that suicidal behaviour should be considered as a disease in its own right, rather than as a behaviour resulting from a mood disorder. They base their argument on mounting evidence showing that the brains of people who have committed suicide have striking similarities, quite distinct from what is seen in the brains of people who have similar mood disorders but who died of natural causes. Suicide also tends to be more common in some families, suggesting there may be genetic and other biological factors in play. The idea of classifying suicidal tendencies as a disease is being taken seriously. Another argument for linking suicidal people together under a single diagnosis is that it could spur research into the neurological and genetic factors they have in common. Signs in the brain In the genes? There is also growing evidence that genetics plays a role.

Psychiatry divided as mental health 'bible' denounced - health - 03 May 2013 Guest editorial: "One manual shouldn't dictate US mental health research" by Allen Frances The world's biggest mental health research institute is abandoning the new version of psychiatry's "bible" – the Diagnostic and Statistical Manual of Mental Disorders, questioning its validity and stating that "patients with mental disorders deserve better". This bombshell comes just weeks before the publication of the fifth revision of the manual, called DSM-5. On 29 April, Thomas Insel, director of the US National Institute of Mental Health (NIMH), advocated a major shift away from categorising diseases such as bipolar disorder and schizophrenia according to a person's symptoms. Instead, Insel wants mental disorders to be diagnosed more objectively using genetics, brain scans that show abnormal patterns of activity and cognitive testing. This would mean abandoning the manual published by the American Psychiatric Association that has been the mainstay of psychiatric research for 60 years.

Suicide Now Kills More Americans Than Car Wrecks Suicide has surpassed car accidents as the No. 1 cause of injury-related death in the United States, according to new research. From 2000 to 2009, the death rate for suicide ticked up 15 percent while it decreased 25 percent for car wrecks, the study found. Improved traffic safety measures might be responsible for the decline in car-crash deaths. As such, the researchers said similar attention and resources are needed to prevent suicide and other injury-related mortality. Death by unintentional poisoning, which includes drug overdoses, came in third behind car wrecks and suicide after increasing 128 percent from 2000 to 2009. "While I am going well beyond our data, my speculation is that the immediate driving force is prescription opioid overdoses," said Rockett, who is a professor at West Virginia University's School of Public Health. The research was based on data from the National Center for Health Statistics.

Veterans Make Up Shrinking Percentage of Suicides The report, based on the most extensive data the department has ever collected on suicide, found that the number of suicides among veterans reached 22 a day in 2010, the most recent year available. That was up by 22 percent from 2007, when the daily number was 18. But it is only 10 percent higher than in 1999, according to the report. In the same 12-year period, the total number of suicides in the country rose steadily to an estimated 105 a day in 2010, up from 80 in 1999, a 31 percent increase. As a result, the percentage of the nation’s daily suicides committed by veterans declined to 21 percent in 2010, from 25 percent in 1999. “What’s happening with veterans is a reflection of what’s happening to America,” Jan Kemp, the national director for suicide prevention at the Department of Veterans Affairs, said in an interview. Dr. “This remains a crisis,” said Paul Sullivan, a founder of Veterans for Common Sense. Dr.

America's Mental Health Industry Is a Threat to Our Sanity Why do some of us become dissident mental health professionals? The majority of psychiatrists, psychologists and other mental health professionals “go along to get along” and maintain a status quo that includes drug company corruption, pseudoscientific research and a “standard of care” that is routinely damaging and occasionally kills young children. If that sounds hyperbolic, then you probably have not heard of Rebecca Riley, and how the highest levels of psychiatry described her treatment as “appropriate and within responsible professional standards.” When Rebecca Riley was 28 months old, based primarily on the complaints of her mother that she was “hyper” and had difficulty sleeping, psychiatrist Kayoko Kifuji, at the Tufts-New England Medical Center in Boston, Massachusetts, diagnosed Rebecca with attention deficit hyperactivity disorder (ADHD). At the age of four, Rebecca was dead. Kifuji’s fate? 1. 2. 3. 4. 5. 6. 7.

Living in America will drive you insane — literally This article originally appeared on Alternet. In “The Epidemic of Mental Illness: Why?” (New York Review of Books, 2011), Marcia Angell, former editor-in-chief of the New England Journal of Medicine, discusses over-diagnosis of psychiatric disorders, pathologizing of normal behaviors, Big Pharma corruption of psychiatry, and the adverse effects of psychiatric medications. While diagnostic expansionism and Big Pharma certainly deserve a large share of the blame for this epidemic, there is another reason. A June 2013 Gallup poll revealed that 70% of Americans hate their jobs or have “checked out” of them. Life may or may not suck any more than it did a generation ago, but our belief in “progress” has increased expectations that life should be more satisfying, resulting in mass disappointment. The Mental Illness Epidemic Severe, disabling mental illness has dramatically increased in the Untied States. In 2011, the U.S. DSM-5 was published in May, 2013. How engaged are we with our schooling?

Can You Call a 9-Year-Old a Psychopath? Michael’s problems started, according to his mother, around age 3, shortly after his brother Allan was born. At the time, she said, Michael was mostly just acting “like a brat,” but his behavior soon escalated to throwing tantrums during which he would scream and shriek inconsolably. These weren’t ordinary toddler’s fits. “It wasn’t, ‘I’m tired’ or ‘I’m frustrated’ — the normal things kids do,” Anne remembered. “His behavior was really out there. When Anne and Miguel first took Michael to see a therapist, he was given a diagnosis of “firstborn syndrome”: acting out because he resented his new sibling. By the time he turned 5, Michael had developed an uncanny ability to switch from full-blown anger to moments of pure rationality or calculated charm — a facility that Anne describes as deeply unsettling. Anne and Miguel live in a small coastal town south of Miami, the kind of place where children ride their bikes on well-maintained cul-de-sacs. At 37, Anne is voluble and frank.

Captives of the Mind Illustration by Matt Dorfman He left more than a dozen lamps burning in his workroom. They shone upon the desk, and on the unfinished manuscript neatly stacked on top of it. Next to the manuscript was a two-page letter. This was the scene on the evening David Foster Wallace hanged himself. It’s not that Wallace’s suicide came as a surprise to anyone who knew him well. The questions remain: Why would someone who struggled so long not just to stay alive but also to stay vital and connected end his life so violently? From childhood on, Wallace wanted to be exempt from the ordinary. Those closest to Wallace recall that this inner conflict developed in boyhood. Contradictory impulses—yearning for greatness yet feeling like a fake with every new achievement—pushed him further into himself. Occasionally Wallace worked double-time in order to bend reality to meet his fears, employing a kind of metalogic reminiscent of his fiction. Capture seizes our attention quietly. David A.