To Foster Productivity and Creativity in Class, Ditch the Desks! 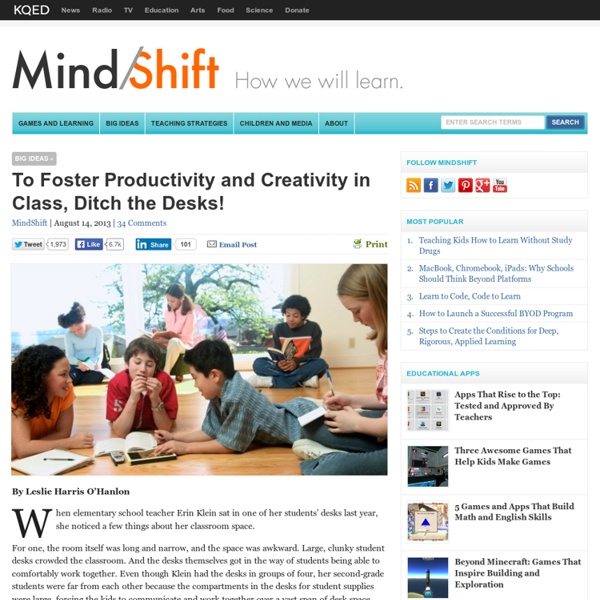 By Leslie Harris O’Hanlon When elementary school teacher Erin Klein sat in one of her students’ desks last year, she noticed a few things about her classroom space. For one, the room itself was long and narrow, and the space was awkward. Large, clunky student desks crowded the classroom. And the desks themselves got in the way of students being able to comfortably work together. “The desks didn’t allow for much collaboration or comfort,” said Klein, who teaches at an independent elementary school in Bloomfield Hills, Michigan. What she wanted was a classroom where students could move around freely, sit comfortably, and work together. “So I decided that the desks were in our way,” she said. That thought led her to start the process of redesigning her room last school year to make it a more inviting space for her students. Research supports the link between classroom space and student learning, Klein said, including work done by Susan Kovalik at The Center for Effective Learning.

15 Charts That Prove We're Far From Post-Racial On July 2, 1964, the Civil Rights Act was signed into law, officially banning discrimination based on race, color, religion, sex, or national origin. It also ended racial segregation in schools, at the workplace and in general public facilities. Fifty years removed from that milestone, it's apparently easy to think that we're over racism. Here are 15 facts that prove that's not the case. 1) Affluent blacks and Hispanics still live in poorer neighborhoods than whites with working class incomes. An analysis of census data conducted by researchers at Brown University found that income isn't the main driving factor in the segregation of U.S. cities. "We cannot escape the conclusion that more is at work here than simple market processes that place people according to their means," their report stated. 2) There's a big disparity in wealth between white Americans and non-white Americans. Much has been written explaining that the racial wealth gap didn't come about by accident.

Ten Documentaries On Champions of Social Justice Social activism has always been a popular subject for documentarians because it presents stories of both cause and characters. The 10 powerful films below are not a complete list of films about social activists, but certainly proof enough that social change is possible, even under the most challenging conditions. Feel free to suggest your own films in the comments below. Freedom Riders (2011) Stanley Nelson’s film about the Freedom Riders, a group of more that 400 black and white civil rights activists who rode together on buses and trains through the Deep South in 1961, violating Jim Crow laws. The Lord Is Not On Trial Here Today (2011) The story of Vashti McCollum, a young housewife from central Illinois who filed a lawsuit that led to the U.S. The Interrupters (2011) Steve James and Alex Kotlowitz’s film about former gang members in Chicago working to stop the kind of violence they once perpetrated.

Apps That Rise to the Top: Tested and Approved By Teachers Michelle Luhtala/Edshelf With the thousands of educational apps vying for the attention of busy teachers, it can be hard to sift for the gold. Michelle Luhtala, a savvy librarian from New Canaan High School in Connecticut has crowd-sourced the best, most extensive list of apps voted on by educators around the country. “I wanted to make sure we had some flexibility because there’s no one app that’s better than all the others,” Luhtala said. Some apps are best for younger students, others are more complicated, better suited for high school students. Many apps do one thing really well, but aren’t great at everything. 30Hands allows a user to make pictures, annotate them, record a voice explainer and then packages it all into a video. Adobe Voice is a recently released education product from Adobe that allows students to narrate a story over an array of digital images. Tellagami is a tool to share quick animated messages. ExplainEverything is another tool for creating video like tutorials.

18 Things White People Should Know/Do Before Discussing Racism Discussions about racism should be all-inclusive and open to people of all skin colors. However, to put it simply, sometimes White people lack the experience or education that can provide a rudimentary foundation from which a productive conversation can be built. This is not necessarily the fault of the individual, but pervasive myths and misinformation have dominated mainstream racial discourse and often times, the important issues are never highlighted. For that reason, The Frisky has decided to publish this handy list that has some basic rules and information to better prepare anyone for a worthwhile discussion about racism. 1. 2. 3. 4. 5. 6. 7. 8. 9. About your neighborhood again: Displacing people of color much? 10. 11. 12. 13. 14. 15. 16. 17. 18.

How Bill Gates pulled off the swift Common Core revolution Microsoft billionaire Bill Gates is taking heat from education groups, which say the Gates Foundation’s philanthropic support comes with strings attached. Here, he responds to his critics in an interview with The Washington Post’s Lyndsey Layton. Lyndsey Layton E-mail the writer The pair of education advocates had a big idea, a new approach to transform every public-school classroom in America. But that wasn’t enough. So they turned to the richest man in the world. On a summer day in 2008, Gene Wilhoit, director of a national group of state school chiefs, and David Coleman, an emerging evangelist for the standards movement, spent hours in Bill Gates’s sleek headquarters near Seattle, trying to persuade him and his wife, Melinda, to turn their idea into reality. The pair also argued that a fragmented education system stifled innovation because textbook publishers and software developers were catering to a large number of small markets instead of exploring breakthrough products. Jay P.

How Millennials Perpetuate Racism By Pretending It Doesn't Exist Photo illustration by Slate. Photos by Shutterstock. When you hear MTV, you don’t think “research.” But, for the last few years, the music television channel has been building a public affairs campaign to address bias called “Look Different.” Aimed at millennials, it seeks to help them deal with prejudice and discrimination in their lives. And as part of the project, MTV has worked with pollsters to survey a nationally representative sample of people ages 14 to 24 to measure how young people are “experiencing, affected by, and responding to issues associated with bias.” Jamelle Bouie is a Slate staff writer covering politics, policy, and race. Overall, MTV confirms the general view of millennials: Compared with previous generations, they’re more tolerant and diverse and profess a deeper commitment to equality and fairness. All of this is apparent in the findings. A Slate Plus Special Feature: Slate Plus members can listen to Jamelle Bouie read this article!

5 Tips for Avoiding Teacher Burnout I've read a lot of articles about preventing teacher burnout, so a new list is probably not that unique. However, as I reflected on what causes burnout, on times when I came pretty close to feeling burnout, and on times when I watched my colleagues burn out around me, I realized that many internal and external factors can lead to teacher burnout -- some that teachers themselves can control and some that they can't. Here are five big factors that play a part in teacher burnout, along with tips on how to prevent these factors from burning you out. 1) Maintain Your "Other" Life It's OK if teaching is your life as long as you have a life outside of your classroom. 2) Be a Stakeholder When Changes Are Made Too much change stretches teachers thin and leads to burnout. If a change needs to be made, be transparent about why this change is happening and, whenever possible, include the affected teachers in the process and avoid sudden changes that appear to come out of nowhere. 5) Keep It Light

Diversity in young adult literature: Where's the 'Mexican Katniss'? CNN Living asked writers and YA watchers what changes they'd like to see in young adult fiction. "I hope more commercial books feature more characters of color. That would change the game. Where's the African-American Harry Potter or the Mexican Katniss?" "I would like to see other socio-economical classes being represented," said Eric Gansworth, author of "If I Ever Get Out of Here." "I would like to see the best fiction from as many diverse voices as possible," said Walter Dean Myers, author of "Hoops" and "Fallen Angels." "I would like to have more people of color authors published, and more characters of color in young adult lit that are main characters," said Cindy Pon, co-founder of Diversity in YA. "With YA, you can make real, significant, social change," said Sherman Alexie, author of "The Absolutely True Diary of a Part-Time Indian." "We (publishers and editors) want to keep hearing more and more voices," editor Cheryl Klein said. What do authors want from YA?

Reddit Users Can’t Deal With a Black Kid Getting Into All 8 Ivy League Schools Updated 04/01/2014, 06:56PM A black high school student gets admitted into all eight Ivy League schools. That’s not the premise of a joke. It’s the latest news story to have fanned the racist fire among Reddit users. Kwasi Enin, a 17-year-old from Shirley, N.Y., was accepted into Yale, Harvard, Princeton, Columbia, Brown, Dartmouth, Penn, and Cornell (yes, it turns out that Cornell, despite being part state school, still counts as an Ivy). Getting into one of these schools is difficult to do--most of the them have an acceptance rate in the single digits, and the others are not far off. There are many reasons why Enin got into all eight schools. On Monday, the aforementioned USA Today story was submitted to Reddit’s /r/news. DonTago: “Don’t you realize that white children of this boy’s generation have to atone for the sins of their ancestors by giving him greater access to opportunities and education for the display of equal merit? Sygaldry: “I'm Asian. Rodoshi: "Seriously? Don’t like it?