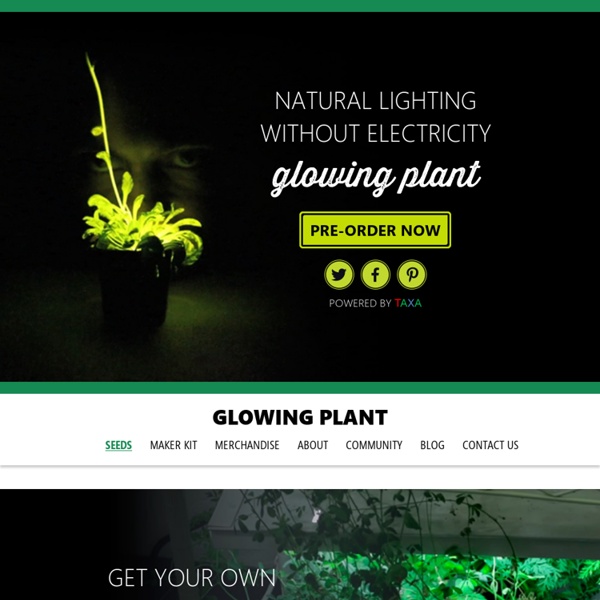 Glowing plants and DIY bio succeed on Kickstarter In the last week, over 3,000 people on Kickstarter ignored the fact it's next to impossible to keep a houseplant alive and backed the now fully-funded "Glowing Plants: Natural Lighting with no Electricity" campaign. The funds will be used to build upon existing technology and create a transgenic plant that has a soft blue-green glow to act as an electricity-free nightlight. Backer rewards, each glowing, include an arabidopsis plant, a rose plant, and arabidopsis seeds. We check in as the Glowing Plants team heads towards their first stretch goal and look at how this project is part of a bigger trend in DIY biology. But be warned: this is not your grandma's seed catalog. View all Arabidopsis thaliana is a small unassuming plant, but is as famous in science circles as any plant has a hope of achieving. The process is like building a custom hot rod. Some of the backer rewards also encourage this DIY biology ethic. Source: Glowing Plant, Kickstarter

ReStore cette semaine: Organs on Demand RENAL RECONSTRUCTION: Wake Forest postdoctoral fellow Hyun-Wook Kang operates a 3-D printer that is making a kidney prototype with cells and biomaterials.IMAGE COURTESY OF WAKE FOREST INSTITUTE FOR REGENERATIVE MEDICINE On a stage in front of an audience of thousands, a futuristic-looking machine squirted gel from a nozzle. Layer by layer, it built up the material, shaping it into a curved, pink, kidney-shape structure based on a medical CT scan of a real organ. It was 2011, and Anthony Atala, director of the Wake Forest Institute for Regenerative Medicine, was demonstrating his progress in using three-dimensional (3-D) printing to make a kidney during his TED Talk. But Atala had not made a functional human kidney, as he at times seemed to imply and as the Agence France-Presse reported in a widely disseminated article. Atala’s kidney prototype represents both the promise of 3-D printing in a medical context and the hurdles that tissue engineers have yet to clear. Blood trouble References

Converting fat cells from liposection to liver cells in nine days — a regenerative medicine breakthrough A new method of creating liver cells does not form tumors in immunocompromised mice. Three weeks after induced pluripotent stem cells (left, magnification below) were implanted in test tissue, palpable tumors were formed in the area of implantation. In contrast, no tumors were detected 2 months after the same number of the new spherical liver-like cells were implanted (right, magnification below). (Credit: Dan Xu et al./Cell Transplantation) A fast, efficient way to turn cells extracted from routine liposuction into liver cells — a feat with huge potential for regenerative medicine — has been developed by Stanford University School of Medicine scientists The scientists performed their experiments in mice, but the adipose (fat) stem cells they used came from human liposuction and actually became human, liver-like cells that flourished inside the mice’s bodies. This method is distinct from those producing liver cells from embryonic stem cells or induced pluripotent stem cells (iPS).

Endeavor - Spiber Inc. The practical application of protein materials has been widely considered to be an unattainable goal. The technological and financial barriers involved are significant. However, we believe that this giant leap is necessary to push humanity forward into a more sustainable future. The moon is the most remote and extreme environment upon which mankind has ever set foot. Many said this "moonshot" was an impossible goal, but the brave, passionate men and women of the Apollo program changed the meaning of this word forever. The practical application of protein materials is our moonshot. Watch Video Engineering Life Engineering began as an outgrowth of the craftwork of metallurgical artisans. In a constant quest to improve their handiwork, those craftsmen exhaustively and empirically explored the properties—alone and in combination—of natural materials. The knowledge accumulated from this exploration and experimentation with natural building blocks eventually led to today’s modern technologies. We can now readily build things like super-lightweight cars and electrical circuits containing billions of transistors that encode highly sophisticated functions, using reliable design and manufacturing frameworks—a vast leap from artisanal craft. Today, there is a parallel progression unfolding in the field of synthetic biology, which encompasses the engineering of biological systems from genetically encoded molecular components.1-7 The first decade or so of synthetic biology can be viewed as an artisanal exploration of subcellular material. Searching for parts Making connections in context Ahmad S. A.S.

Advancements in High-Speed DNA Synthesis to Drive Growth in the Global Synthetic Biology Market, According to New Report by Global Industry Analysts, Inc. San Jose, California (PRWEB) November 26, 2013 Follow us on LinkedIn - Synthetic biology as an extension of biotechnology and genetic engineering, is expected to present a new world of opportunities right from designing new biological systems to entirely transforming the way food crops or medicines are developed. Unlike genetic engineering, in synthetic biology, scientists entirely reengineer biological systems by writing a new genetic code on a computer, which is later impregnated into organisms for creating an artificial life form. As stated by the new market research report on, Synthetic Biology, Europe represents the largest market worldwide, supported by high R&D interest in developing synthetic biology based products. Synthetic biology has potential applications in a number of areas, including health, environment, energy, food and agriculture and new materials development. About Global Industry Analysts, Inc.