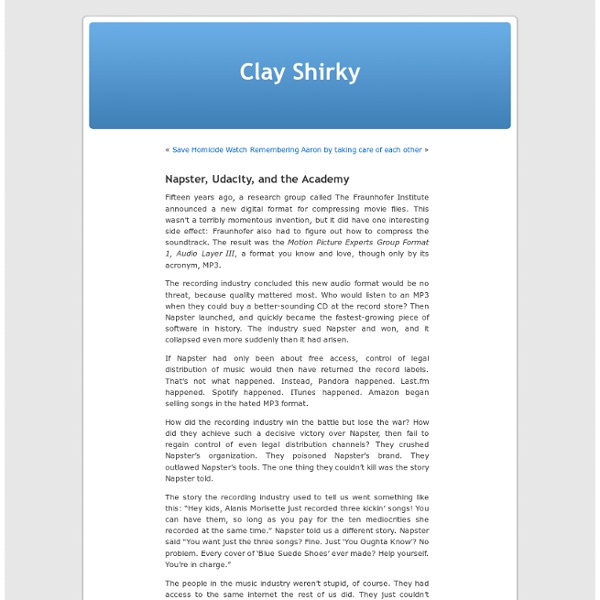 Fifteen years ago, a research group called The Fraunhofer Institute announced a new digital format for compressing movie files. This wasn’t a terribly momentous invention, but it did have one interesting side effect: Fraunhofer also had to figure out how to compress the soundtrack. The result was the Motion Picture Experts Group Format 1, Audio Layer III, a format you know and love, though only by its acronym, MP3. The recording industry concluded this new audio format would be no threat, because quality mattered most. Who would listen to an MP3 when they could buy a better-sounding CD at the record store? Then Napster launched, and quickly became the fastest-growing piece of software in history. If Napster had only been about free access, control of legal distribution of music would then have returned the record labels. How did the recording industry win the battle but lose the war? The people in the music industry weren’t stupid, of course. But who faces that choice?

Essay on how MOOCs raise questions about the definition of student Clay Shirky and Jay Rosen have popularized the phrase “People Formerly Known as the Audience” to describe the evolution of contemporary media consumers from mere listeners or viewers into interactive and demanding participants. A similar redefinition of roles is emerging in conversations about the consumers of massive open online courses. With a student-faculty ratio of, in some cases, 150,000: 1, the teacher of a MOOC may well struggle to define his or her relationship to an audience of course-takers who do and do not resemble traditional "students." In a recent Twitter exchange, media scholars Siva Vaidhyathan and Cathy Davidson debated the question of whether people enrolled in a MOOC are accurately described as “students.” @CathyNDavidson asked, "Are they really all 'students' or merely 'registrants'?"

Three Kinds of MOOCs By Lisa, on August 15th, 2012 We are so into MOOCs now that it’s too much for me. Gotta apply Ockham’s Razor 2.0 to this stuff. At the Ed-Media conference, I attended a session by Sarah Schrire of Kibbutzim College of Education in Tel Aviv. Online courses need human element to educate Online courses are proliferating, says Douglas Rushkoff, but will really succeed when they bring humanity to learning process Douglas Rushkoff: Education is under threat, but online computer courses are not to blameHe says education's value hard to measure; is it for making money or being engaged?He says Massive Open Online Courses lack human exchange with teachersRushkoff: MOOCs should bring together people to share studies, maintain education's humanity

Top Ed-Tech Trends of 2012: MOOCs Part 5 of my Top Ed-Tech Trends of 2012 series The Year of the MOOC Massive Open Online Courses. The Ecologies of Yearning #opened12 (with image, tweets) · audreywatters Ecology of ideas -- Bateson Bateson's Hierarchy of Learning Zero learning: "receipt of signal." No error possible Open online courses – an avalanche that might just get stopped These days there are plenty of prophets preaching hi-tech and digital solutions to the problems of expanding access to knowledge and higher education. Barely a week goes by without some new hymn to education technology, open-source software or open-access publishing. In the US, the growing chorus for online education through massive open online courses, or moocs, has been deafening. But in Britain, it has barely registered. Last December, the commercial launch of the Open University's mooc platform, FutureLearn, attracted the participation of a dozen universities and the support of David Willetts, but little response from Britain's beleaguered academics. No wonder that last month Sir Michael Barber, the chief education adviser of Pearson, the world's largest profit-making education provider, proclaimed that universities were powerless to stop the online avalanche.

Autistic Students Make Music Using iPad Apps (WATCH) The first time you listen to Ryan Rodriguez, Denzel Jackson and Jasmine Latham's music, you might think they sound like any high school band. But the three autistic musicians, along with the rest of their classmates, use a special learning technique and perform on their iPads. The innovative new music program comes out of P177Q, a school for special needs students in Queens, New York. Teacher Adam Goldberg integrated iPads into his class as a way of getting around the challenging, technical aspects of traditional instruments and allowing students to focus on creating music.

Openness, the double bind, and ecologies of yearning. » EdTech@VCCS I’ve seen my share of conference keynotes, some tedious, some exhilarating, many forgettable. But I have never seen a keynote quite like the one delivered by Gardner Campbell on the morning of the first day of the OpenEd Conference. In fact, calling it a keynote is a disservice. Garageband in the Classroom » THS Music Department Apple’s Garageband was released in 2004. Since then it has revolutionized music education with its extremely easy to use interface, loads of features and attractive price! How can you use Garageband in the classroom? ComposingCreating loop-based projectsBasic recording conceptsMIDI RecordingAudio RecordingPodcastingFilm ScoringBasic audio mixingSlide Show or Multimedia presentations.

Elite education for the masses They included Patrycja Jablonska in Poland, Ephraim Baron in California, Mohammad Hijazi in Lebanon and many others far from Baltimore who ordinarily would not have a chance to study at the elite Johns Hopkins Bloomberg School of Public Health. They logged on to a Web site called Coursera and signed up. They paid nothing for it. These students, a sliver of the more than 1.7 million who have registered with Coursera since April, reflect a surge of interest this year in free online learning that could reshape higher education. The phenomenon puts big issues on the table: the growth of tuition, the role of a professor, the definition of a student, the value of a degree and even the mission of universities. Second Week Reflections: Social Learning in a MOOC Posted by Derek Bruff on Tuesday, July 30, 2013 in Meeting Notes, Reflections. Our discussion on Monday of the social aspects of learning in a MOOC was an interesting one. It’s clear that many of us are benefiting from the interactions we’re having with our local study group, although I wonder what our study group members who weren’t present on Monday would say about that.

THE APP REVOLUTION HITS THE MUSIC CLASSROOM By Luke Serrano. It seems like secondary school music education has undergone continual evolution for about a decade or so; the waves of technological development have facilitated ever more sophisticated approaches to the teaching and learning of music in the classroom. For the teacher, music is the kind of subject that always benefits from this kind of technological advancement, mainly because there is so much to do. We’re run off our feet most of the time, and always looking for efficiencies which deliver better results for everyone. For example, let’s consider the preparation of a teacher-written arrangement of a song for a school band. In the prehistoric age, we wrote all of the instrumental parts by hand, a laborious, mind-numbing task.