28 Gifts For People Who Love Snail Mail. This Real-Life Exorcism Story Will Give You Nightmares For Days. 27 Brilliant Songs You Need In Your November Playlist. These Five Healthy Food Swaps Will Beat Your Cravings. 31 Delicious Packaged Foods That Actually Aren't Terrible For You - BuzzFeed News. Green Sauce Shrimp Pasta. 16 Soothing Websites To Check Out When You're Feeling Down. 28 Gifts Dogs Totally Have On Their Wish Lists.

Snack Mix Four Ways. 24 Gifts For Anyone Who Loves Butter. 28 Gifts For People Who Love Chokers. Easy Slow Cooker Cranberry Apple Pie Cobbler. 26 Delicious Korean Foods You Need In Your Life. 18 Weeknight Curries To Make In The Slow Cooker. There's A Terrifying Documentary About The "Slender Man" Stabbing. 15 New Indian Web Series You Should Really Be Binge-Watching By Now. 21 Ways To Upgrade Your Instant Ramen. 23 Recipes You Need If You Just Fucking Love Pesto. 23 Memes All True Wine Moms Will Love. 17 Sushi-Food Hybrids That Will Make You Question Everything. 17 Vegetarian BBQ Recipes Even Meat Eaters Will Love. 23 Movies You Need To Watch When You've Had Enough Of Everything. 15 Bars You Must Visit Before You Die. Vegan Pasta Recipe: Bow-Tie Noodles and a Dairy-Free Garlic Sauce.

This is one of my favorite pastas in the world—creamy farfalle pasta with sun-dried tomatoes and mushrooms. 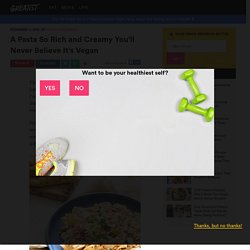 32 Beautiful Sentences From Literature To Read When You're Feeling Lost. This Upside Down Apple Cake Is To Die For. 15 Genius Ideas For People Who Are Obsessed With Cheeseburgers. You Should Make These Adorable Strawberry Breakfast Muffins This Morning. 29 Things Real Vegans Actually Eat. 13 Alcoholic Fruit Recipes That Are Perfect For Any Party. 23 Gifts For BFFS With Zero Boundaries. 21 Gifts For People Who Just Really Fucking Love Puns. 14 Simple Desserts Made With Four Ingredients Or Less. 34 Movies Guaranteed To Fuck With Your Head. I Did The Whole30 Food Challenge And Lived To Tell The Tale. 16 Long-Haul Flight Hacks That'll Make Your Next Trip A Breeze. 15 Sandwiches For When You Can't Eat Bread. 25 Incredible Treehouses You Can Actually Rent. 19 Products For Everyone Who Loves Black Even When It's Hot. 3-Course Tuscan Chicken Dinner. 23 Rap Songs That Will Always Make You Sing Along. This Salad Is Packed Full Of Wonderful Vegetables That You're Going To Love.

18 Mouthwatering Matcha Desserts You'll Fall Deep In Love With. This Blueberry French Toast Boat Is So Damn Good. 27 Books You'll Want To Read By The Pool This Summer. 19 Gifts For People Who Love Drinking Tea. 23 Gifts People Are Buying On Amazon Right Now. 19 Mango Recipes That'll Make Your Summer Juicy AF. Ramen Muffin Bites. 14 Things All Coffee Lovers Have To Try. 31 Awesome And Inexpensive Things You Need For Your Kitchen. 29 Amazing Gifts You'll Love Almost As Much As French Fries. 17 Underwear Sets That Are So Ridiculously Pretty. 39 Amazing Gifts For People Who Love Coffee. Nightcore - We will rock you. 23 Healthyish Comfort Food Recipes To Stress Eat During The Election - BuzzFeed News. Panda Desiigner - Lyrics (Official Audio/Song) Escape to the Cypress Hills. Visa offers Manitobans $10 in free groceries if they don't shop at Walmart. Visa, which is fighting Walmart over fees, is now offering cardholders in Manitoba a $10 grocery bill rebate if they shop elsewhere. 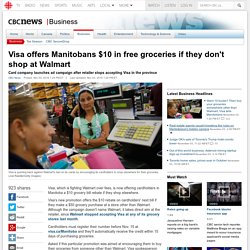 Visa's new promotion offers the $10 rebate on cardholders' next bill if they make a $50 grocery purchase at a store other than Walmart. Although the campaign doesn't name Walmart, it takes direct aim at the retailer, since Walmart stopped accepting Visa at any of its grocery stores last month. Cardholders must register their number before Nov. 15 at visa.ca/Manitoba and they'll automatically receive the credit within 15 days of purchasing groceries. Asked if this particular promotion was aimed at encouraging them to buy their groceries from someone other than Walmart, Visa spokesperson Carla Hindman said, "We hope this eases the inconvenience for Visa cardholders in Manitoba who cannot use their card everywhere they may want to. " Dave Broadfoot, Royal Canadian Air Farce comedian, dead at 90 - Entertainment. Comedian and former Royal Canadian Air Farce actor Dave Broadfoot has died at age 90, his family confirmed to CBC News. 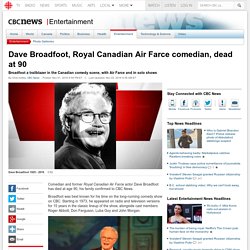 Broadfoot was best known for his time on the long-running comedy show on CBC. Starting in 1973, he appeared on radio and television versions for 15 years in the classic lineup of the show, alongside cast members Roger Abbott, Don Ferguson, Luba Goy and John Morgan. Dave Broadfoot, shown performing on stage late in his career, was a comedian and former Royal Canadian Air Farce actor. He has died at 90. Culture - The secret languages of Britain. The word ‘eavesdropper’ originally referred to people who, under the pretence of taking in some fresh air, would stand under the ‘eavesdrip’ of their house – from which the collected raindrops would fall – in the hopes of catching any juicy tid-bits of information that might come their way from their neighbour’s property. 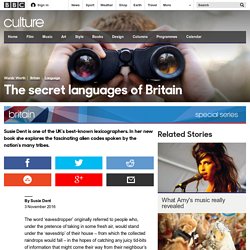 According to my parents, I’ve always liked to tune into the conversations of others. But rather than hope for a snippet of salacious gossip, it has always been the words themselves that I wanted to understand. I would duly write such overhearings down, poring over them later in an attempt to crack these alien grown-up codes. It was the start of a lifelong passion. I’ve gone through a lot of notebooks since then and somehow, I became a professional word detective. Wood Buffalo National Park - Wikipedia. Wood Buffalo National Park, located in northeastern Alberta and southern Northwest Territories, is the largest national park in Canada at 44,807 km2 (17,300 sq mi). 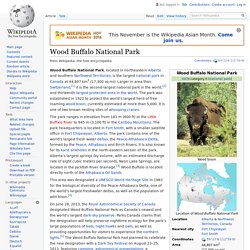 Larger in area than Switzerland,[1] it is the second-largest national park in the world,[2] and thirteenth-largest protected area in the world. The park was established in 1922 to protect the world's largest herd of free roaming wood bison, currently estimated at more than 5,000. It is one of two known nesting sites of whooping cranes. This area was designated a UNESCO World Heritage Site in 1983 for the biological diversity of the Peace-Athabasca Delta, one of the world's largest freshwater deltas, as well as the population of wild bison.[4] Celebrating cheese with a Canadian fondue - Ottawa. Later in November, the Canada Museum of Agriculture and Food will be celebrating that most comforting of foods: cheese. 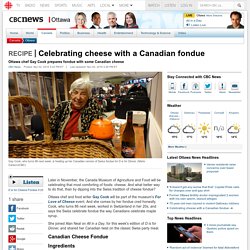 And what better way to do that, than by dipping into the Swiss tradition of cheese fondue? Ottawa chef and food writer Gay Cook will be part of the museum's For Love of Cheese event. And she comes by her fondue cred honestly. Cook, who turns 86 next week, worked in Switzerland in her 20s, and says the Swiss celebrate fondue the way Canadians celebrate maple syrup. She joined Alan Neal on All in a Day, for this week's edition of D is for Dinner, and shared her Canadian twist on the classic Swiss party meal.