How Do You Create A Culture Of Innovation? 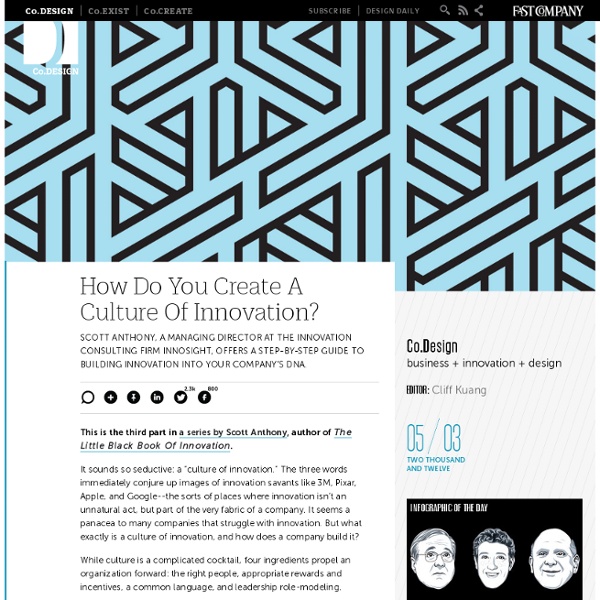 This is the third part in a series by Scott Anthony, author of The Little Black Book Of Innovation. It sounds so seductive: a “culture of innovation.” The three words immediately conjure up images of innovation savants like 3M, Pixar, Apple, and Google--the sorts of places where innovation isn’t an unnatural act, but part of the very fabric of a company. It seems a panacea to many companies that struggle with innovation. But what exactly is a culture of innovation, and how does a company build it? While culture is a complicated cocktail, four ingredients propel an organization forward: the right people, appropriate rewards and incentives, a common language, and leadership role-modeling. The Innovator’s DNA Has Four Components If you ask most people what makes a great innovator, the most common response is innate gifts from parents or a higher power. At the core is what the professors call “associational thinking.” Questioning: Asking probing questions that impose or remove constraints.

With mobile tech, mapping a city’s emotions, memories PHILADELPHIA -- What can technologies do for us to help us understand what's going on in the city? University of Pennsylvania urban planning professor Amy Hillier took to the stage here at the second annual TEDxPhilly conference on Tuesday to demonstrate how technology could one day help us look beyond statistics to visualize the very experience of a city. "Could we map emotion? Memory?

Data Mining Image: Detail of sliced visualization of thirty video samples of Downfall remixes. See actual visualization below. As part of my post doctoral research for The Department of Information Science and Media Studies at the University of Bergen, Norway, I am using cultural analytics techniques to analyze YouTube video remixes.

Collective Genius Google’s astonishing success in its first decade now seems to have been almost inevitable. But step inside its systems infrastructure group, and you quickly learn otherwise. The company’s meteoric growth depended in large part on its ability to innovate and scale up its infrastructure at an unprecedented pace. Bill Coughran, as a senior vice president of engineering, led the group from 2003 to 2011.

An Interactive Infographic Maps The Future Of Emerging Technology Can speculation about the future of technology serve as a measuring stick for what we create today? That’s the idea behind Envisioning Technology's massive infographic (PDF), which maps the future of emerging technologies on a loose timeline between now and 2040. Click to enlarge.

What Is Disruptive Innovation? The theory of disruptive innovation, introduced in these pages in 1995, has proved to be a powerful way of thinking about innovation-driven growth. Many leaders of small, entrepreneurial companies praise it as their guiding star; so do many executives at large, well-established organizations, including Intel, Southern New Hampshire University, and Salesforce.com. Unfortunately, disruption theory is in danger of becoming a victim of its own success. Despite broad dissemination, the theory’s core concepts have been widely misunderstood and its basic tenets frequently misapplied. Furthermore, essential refinements in the theory over the past 20 years appear to have been overshadowed by the popularity of the initial formulation.

ArtStack - art online We believe the best way to discover art is through people Michał Brzeziński has shared 2 artworks on ArtStack Discover and remember art See more art by artists you like Already have an account? Log in Japanese Scientists Create Touchable Holograms // Current To Our Faithful Current.com Users: Current's run has ended after eight exciting years on air and online. The Current TV staff has appreciated your interest, support, participation and unflagging loyalty over the years. Your contributions helped make Current.com a vibrant place for discussing thousands of interesting stories, and your continued viewership motivated us to keep innovating and find new ways to reflect the voice of the people. We now welcome the on-air and digital presence of Al Jazeera America, a new news network committed to reporting on and investigating real stories affecting the lives of everyday Americans in every corner of the country.

Innovation is overvalued. Maintenance often matters more Innovation is a dominant ideology of our era, embraced in America by Silicon Valley, Wall Street, and the Washington DC political elite. As the pursuit of innovation has inspired technologists and capitalists, it has also provoked critics who suspect that the peddlers of innovation radically overvalue innovation. What happens after innovation, they argue, is more important. Maintenance and repair, the building of infrastructures, the mundane labour that goes into sustaining functioning and efficient infrastructures, simply has more impact on people’s daily lives than the vast majority of technological innovations. The fates of nations on opposing sides of the Iron Curtain illustrate good reasons that led to the rise of innovation as a buzzword and organising concept. Over the course of the 20th century, open societies that celebrated diversity, novelty, and progress performed better than closed societies that defended uniformity and order.

Managing For Disruption Tradition embraces stability. Time honored principles get that way because they have strong track records of success. The tried and true, extrapolated into the future, often looks like a sure thing, while deviating from historical norms can look downright foolish. Yet the funny thing about the future is that there’s no guarantee that it will look like the past. Contexts change and when they do, old rules no longer apply.