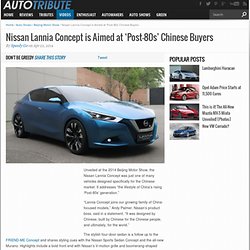 It addresses “the lifestyle of China’s rising ‘Post-80s’ generation.” “Lannia Concept joins our growing family of China-focused models,” Andy Palmer, Nissan’s product boss, said in a statement. “It was designed by Chinese, built by Chinese for the Chinese people, and ultimately, for the world.” The stylish four-door sedan is a follow up to the FRIEND-ME Concept and shares styling cues with the Nissan Sports Sedan Concept and the all-new Murano. These are all signature trademarks of Nissan’s next-generation design philosophy. The interior was not shown, but the Japanese automaker says it was designed to suit the Chinese digital lifestyle, indicating the presence of many technological goodies. “The Lannia concept exudes ‘daqi,'” explained Taiji Toyota, head of Nissan’s Chinese design studio. SOLIDWORKS Simulation Professional. SolidWorks Simulation Certified Training Courses. Below is a list of courses offered by NT CADCAM. 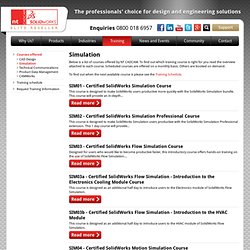 To find out which training course is right for you read the overview attached to each course. Scheduled courses are offered on a monthly basis. Others are booked on demand. To find out when the next available course is please see the Training Schedule. Index of /mech403/HelpFiles. SolidWorks - Les tables de tôlerie. Homepage of Amit Agrawal, Mitsubishi Electric Research Labs (MERL) (Formerly at umiacs.umd.edu/~aagrawal) SolidWorks: Bibliotheque de conception. Fonction avec configuration.

Envisage Group. Envisage offers a range of courses for ICEM products from beginner level to through to advanced user requirements.ICEM Surf Foundation 5 days With content specifically for new users of ICEM Surf, this course covers all aspects of ICEM Surf Professional including curve and surface creation, modification and diagnostics. 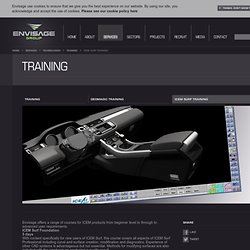 Chrysler CAD-CAM history and Dassault CATIA versus UG NX5. On May 3, 2010, Automotive News reported on a move at Chrysler to replace CATIA with Siemens’ NX (originally created by EDS) to work better with Fiat, which uses NX. 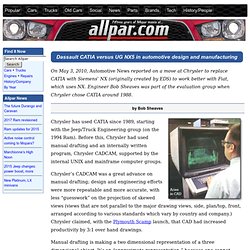 Engineer Bob Sheaves was part of the evaluation group when Chrysler chose CATIA around 1988. by Bob Sheaves Chrysler has used CATIA since 1989, starting with the Jeep/Truck Engineering group (on the 1994 Ram). Before this, Chrysler had used manual drafting and an internally written program, Chrysler CADCAM, supported by the internal UNIX and mainframe computer groups. Chrysler’s CADCAM was a great advance on manual drafting; design and engineering efforts were more repeatable and more accurate, with less “guesswork” on the projection of skewed views (views that are not parallel to the major drawing views, side, plan/top, front, arranged according to various standards which vary by country and company.)

Manual drafting is making a two dimensional representation of a three dimensional object. Defining the need.

SolidWorks official files. T-Splines. VSR. Evolution of Computer-Aided Design. By David Cohn While they may seem new to some, many of the computer-aided design programs we use today have been around for more than a decade, and virtually all trace their lineage to work begun more than 50 years ago. 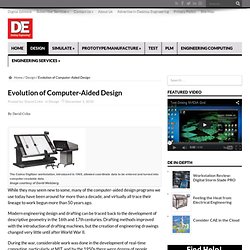 Modern engineering design and drafting can be traced back to the development of descriptive geometry in the 16th and 17th centuries. Drafting methods improved with the introduction of drafting machines, but the creation of engineering drawings changed very little until after World War II. During the war, considerable work was done in the development of real-time computing, particularly at MIT, and by the 1950s there were dozens of people working on numerical control of machine tools and automating engineering design. But it’s the work of two people in particular—Patrick Hanratty and Ivan Sutherland—who are largely credited with setting the stage for what we know today as CAD.

The Fathers of CAD Hanratty is widely credited as “the Father of CADD/CAM.”