Europe Has The Highest Online Piracy Rates, By Far. An in-depth analysis of billions of worldwide visits to torrent, streaming and download sites has revealed that Europe is a hotbed for piracy. The piracy rate is the highest in Latvia, where nearly half of the population visits pirate sites, and the entire global top ten is made up of European countries. Despite the growing availability of legal options, online piracy remains rampant.

Every day pirate sites are visited hundreds of millions of times. Piracy tracking outfit MUSO has documented the piracy landscape with data from 14,000 of the largest global piracy sites. In total, the company recorded 141 billion visits to pirate sites last year alone. But where are these pirates coming from? In absolute numbers the United States clearly comes out on top. Perhaps not a surprise, as the U.S. is one of the largest countries in the world with a high Internet penetration. The first non-European country in the list is Australia, with a piracy rate of 16%, followed by Israel. Torrentz Shuts Down, Largest Torrent Meta-Search Engine Says Farewell. Court Rules Whole Site Blocking Justifiable in Piracy Fight. Forcing ISPs to block entire websites to tackle Internet piracy is justifiable, a court in India has ruled. 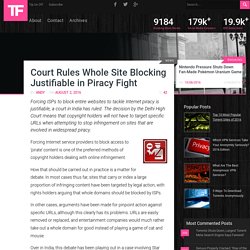 The decision by the Delhi High Court means that copyright holders will not have to target specific URLs when attempting to stop infringement on sites that are involved in widespread piracy. Forcing Internet service providers to block access to ‘pirate’ content is one of the preferred methods of copyright holders dealing with online infringement. Europe Has The Highest Online Piracy Rates, By Far. KickassTorrents Crew Ask For Donations to Rebuild The Site. While the original KickassTorrents site remains offline, a group of site admins and moderators have plans to restore the site to its former glory. 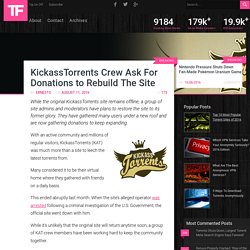 They have gathered many users under a new roof and are now gathering donations to keep expanding. With an active community and millions of regular visitors, KickassTorrents (KAT) was much more than a site to leech the latest torrents from. Many considered it to be their virtual home where they gathered with friends on a daily basis. Pirate Bay wird zu riesiger Film- und TV-Streaming-Seite - Copyrights. 13 apps to replace cable. Brandstetter: Ansehen von Piraten-Streams nicht illegal - Copyrights. 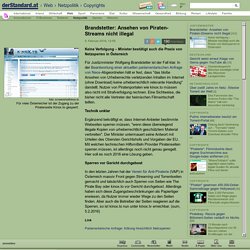 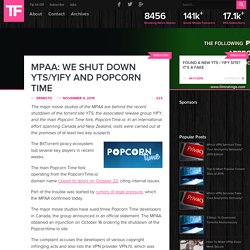 In an international effort spanning Canada and New Zealand, visits were carried out at the premises of at least two key suspects The BitTorrent piracy ecosystem lost several key players in recent weeks. The main Popcorn Time fork operating from the PopcornTime.io domain name closed its doors on October 23, citing internal issues.

Part of the trouble was started by rumors of legal pressure, which the MPAA confirmed today. The major movie studios have sued three Popcorn Time developers in Canada, the group announced in an official statement. TorrentButler Is a Visual, Movie-Based Torrent Discovery Engine. iTunes is Illegal Under UK Copyright Law - TorrentFreak. The High Court recently overturned private copying exceptions introduced last year by the UK Government, once again outlawing the habits of millions of citizens. 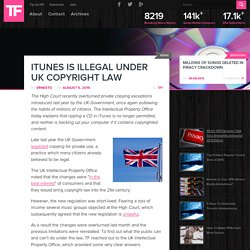 The Intellectual Property Office today explains that ripping a CD in iTunes is no longer permitted, and neither is backing up your computer if it contains copyrighted content. Late last year the UK Government legalized copying for private use, a practice which many citizens already believed to be legal. The UK Intellectual Property Office noted that the changes were “in the best interest” of consumers and that they would bring copyright law into the 21st century. However, the new regulation was short-lived. Fearing a loss of income several music groups objected at the High Court, which subsequently agreed that the new legislation is unlawful. As a result the changes were overturned last month and the previous limitations were reinstated. The Proxy Bay - A List of Pirate Bay Proxy sites and mirrors. Österreichische Provider müssen Pirate Bay blocken - Copyrights. Zehn Fragen zu Netzsperren: Was, warum und wie sie umgehen? - Copyrights. "Game of Thrones"-Staffelfinale bricht Download-Rekorde - Copyrights - derStandard.at › Web.

Documents.envisional.com/docs/Envisional-Internet_Usage-Jan2011.pdf. Documents.envisional.com/docs/Envisional-Global_Site_Blocking_Landscape-July2012.pdf. Media Piracy in Emerging Economies — Publication. Www.booz.com/media/uploads/BoozCo-Impact-US-Internet-Copyright-Regulations-Early-Stage-Investment. Napster files for bankruptcy - Jun. 3, 2002. NEW YORK (CNN/Money) - Online music swapping service Napster Inc., which has been involved in legal turmoil over copyright infringement for more than a year, filed for bankruptcy protection Monday in an effort to move forward with a relaunch of its once popular service. 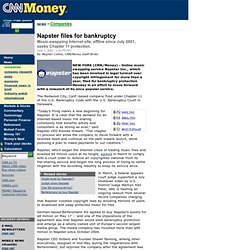 The Redwood City, Calif. -based company filed under Chapter 11 of the U.S. Bankruptcy Code with the U.S. Bankruptcy Court in Delaware. "Today's filing marks a new beginning for Napster. Napster, which began the Internet craze of trading music files and boasted 60 million users at its height, agreed in March to comply with a court order to remove all copyrighted material from its file-sharing service and began the long process of trying to settle litigation with the recording industry to keep its service alive.

In March, a federal appeals court judge supported a July shutdown order by U.S. A Brief History Of US Anti-Piracy Efforts. Timeline of file sharing. This is a timeline of events in the history of file sharing. 1970s[edit] 8-inch floppy disk drive compared in size to 3.5" floppy disk of 1984 1980s[edit] Most file sharing in this era was done by modem over landline telephone, at speeds from 300 to 9600 bits per second. 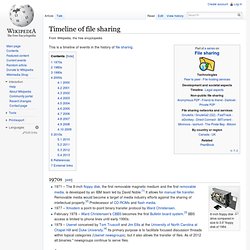 Many file systems in use only supported short filenames. 1990s[edit] In this decade, the very basic ideas involved with file sharing were experimented with. 2000s[edit] In computer science terms, modern file sharing begins in the 2000s. 2000[edit] 2001[edit] With all these programmes online, why watch TV?

British TV viewers may scratch their heads when asked what Hulu is now, but later this year, if things go to plan, we will all be talking about the catchup service with the funny name. 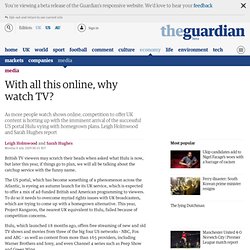 The US portal, which has become something of a phenomenon across the Atlantic, is eyeing an autumn launch for its UK service, which is expected to offer a mix of ad-funded British and American programming to viewers. To do so it needs to overcome myriad rights issues with UK broadcasters, which are trying to come up with a homegrown alternative. This year, Project Kangaroo, the nearest UK equivalent to Hulu, failed because of competition concerns. Hulu, which launched 18 months ago, offers free streaming of new and old TV shows and movies from three of the big four US networks - NBC, Fox and ABC - as well as content from more than 165 providers, including Warner Brothers and Sony, and even Channel 4 series such as Peep Show and Green Wing. 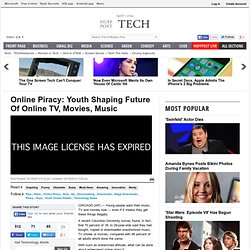 A recent Columbia University survey found, in fact, that 70 percent of 18- to 29-year-olds said they had bought, copied or downloaded unauthorized music, TV shows or movies, compared with 46 percent of all adults who'd done the same. With such an entrenched attitude, what can be done about widespread online piracy? Certainly law enforcement has gone after scofflaws like these, hitting them with fines and, in some cases, even jail time.

Congress is considering controversial anti-piracy bills that would, among other things, forbid search engines from linking to foreign websites accused of copyright infringement. And there are lawsuits pitting media heavyweights against Internet firms — notably Viacom's billion-dollar litigation against YouTube. Timeline of file sharing. The Pirate Bay - The galaxy's most resilient bittorrent site. Drehbuch veröffentlicht: Tarantino droht Gawker mit Millionenklage - Onlinemedien - derStandard.at › Etat. HBO Doesn’t Care If You Share Your HBO Go Account… For Now. The Internets are ablaze this morning after comments from HBO’s CEO about users sharing their HBO Go accounts. 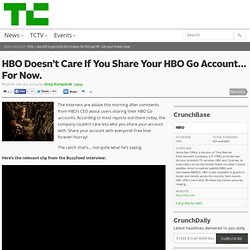 How Technology is Transforming the Business of Hollywood. Garrett Heath is a technology storyteller with Rackspace. Ever since T-1000 morphed from liquid metal into human form in Terminator 2: Judgment Day and dinosaurs roamed Isla Nublar in Jurassic Park, computers have played a vital role in Hollywood. But bits and bytes have transformed the industry well beyond special effects— technology has fundamentally impacted the old studio model for creating movies. Here are several ways that the Internet and cloud computing have changed show business. Collaboration in the Cloud. Academic Torrents makes datasets and papers available via BitTorrent. Sharing data is often not as easy as it sounds. While it is usually not a problem to make available smaller data sets to a group of people or the public, it quickly becomes an issue if the sets grow in size.

If you need to make available a 9 Gigabyte archive for example, many of the traditional file sharing options become automatically unavailable to you. You cannot use email or the majority of file synchronization services for example, and while you could set up a file server, it requires more work than you may want to invest, considering that you not only have to set up the server, but also maintain it and make sure it is secure. Academic Torrents is an attempt to make academic datasets and papers available via BitTorrent. When you open the site you are greeted with a short introduction of what the site is, and what it has to offer.