The 5 Most Insane Alternate Reality Games 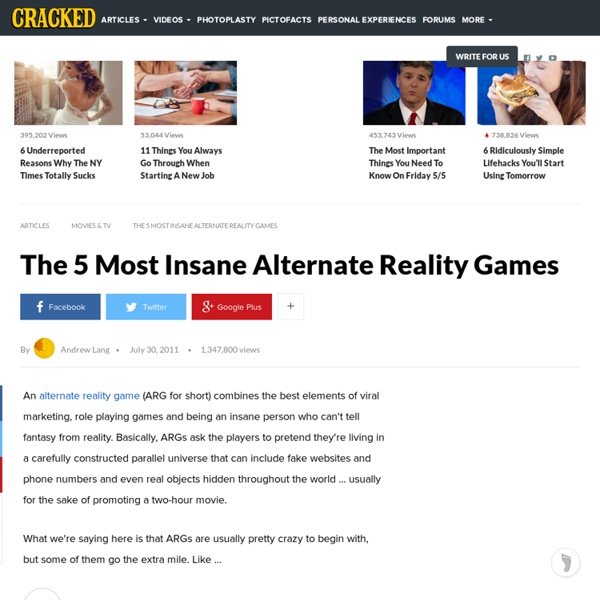 The game took off with a bang when, during the 2007 San Diego Comic-Con, people found "Jokerized" $1 bills that led them to whysoserious.com, a page advertising jobs for Joker henchmen. Those eager to be repeatedly punched by costumed vigilantes and/or murdered by their own boss were instructed to be at a certain spot near the convention center at 10:00 a.m. the next day. Upon going there at the allotted time, players discovered a phone number ... written in the sky. "Don't call that, dude -- it's probably Goatse." Calling the number prompted a recording of a whimpering man being forced to read instructions for what came next: a scavenger hunt. Via Batman.wikibruce.com But wait, why would the mob want to kill the Joker? One scavenger hunt told players to go out and take pictures of themselves dressed as the Joker while standing near a famous world monument, or to send the ones they already had, if they were lunatics. See what would happen if our lives were 24-hour games.

Classic RPG's that every pc gamer should check out Urgent Evoke - A crash course in changing the world. Favorite and forget ways to waste your time when it's boiling hot outside and can't bear to chase Pokemon Estudio Creativo La Media | Diseño de experiencias transmedia - Desarrollo de medios digitales - Innovación audiovisual The best board games of 2017, as chosen by the Board Game Geek community The members of Board Game Geek, the largest online community of board game fans, have selected the winners of the 2017 Golden Geek Awards. This year the big winner is Gloomhaven, the diceless dungeon crawler. Other award-winning titles include The 7th Continent, Codenames Duet and Scythe: The Wind Gambit. In addition to its massive community, Board Game Geek is an exceptional gaming resource. Here’s all the winners, by category. Board game of the year Winner – Gloomhaven Runner Up - Azul Runner Up - The 7th Continent 2-player game Winner – Codenames Duet Runner Up – Caverna: Cave vs. Runner Up – The Fox in the Forest Artwork & Presentation Winner – Photosynthesis Runner Up – Azul Runner Up – Sagrada Card Game Winner – Century: Spice Road Runner Up – Clank! Runner Up – Ethnos Cooperative Game Runner Up – The 7th Continent Runner Up – Pandemic Legacy: Season 2 Expansion Winner – Scythe: The Wind Gambit Runner Up – Terraforming Mars: Hellas & Elysium Runner Up – Terraforming Mars: Venus Next Family Game Wargame