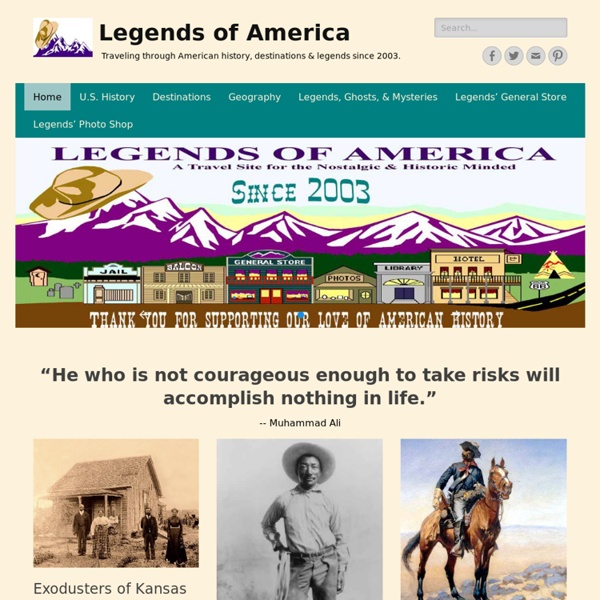 A History of Halloween Costumes [Infographic] The traditional and cultural even that we know today as Halloween – super famous in countries like the United States, Canada, Ireland and the United Kingdom – was actually born more than ten centuries ago, inspired by the celebrations and origins of ancient peoples like the Celts. Truth be told, the first official record of the word “Halloween”is very, very old. The term was born thanks to the contraction of the Scottish term “Allhallow –eve”, which means the eve of All Saints’ Day and was considered a holy night. However, there’s also a religious side to this explanation. Related Resources from B2C» Free Webcast: Digital Skills & Talent Gap Study Summary of Top Findings and How to Apply for 2015 Learning Programs Source

American Slave Narratives From 1936 to 1938, over 2,300 former slaves from across the American South were interviewed by writers and journalists under the aegis of the Works Progress Administration. These former slaves, most born in the last years of the slave regime or during the Civil War, provided first-hand accounts of their experiences on plantations, in cities, and on small farms. Their narratives remain a peerless resource for understanding the lives of America's four million slaves. What makes the WPA narratives so rich is that they capture the very voices of American slavery, revealing the texture of life as it was experienced and remembered. This web site provides an opportunity to read a sample of these narratives, and to see some of the photographs taken at the time of the interviews. American Studies Hypertexts at the University of Virginia This page was begun as part of the American Hypertext Workshop at the University of Virginia, Summer 1996. Last Modified: March 6, 1998 Another AS Hypertext

Fold3 - Historical military records It’s Monstrous! 4 Themes & 20+ Activities Kids Will Love You Explored This Halloween | Sprout English “There is magic, but you have to be the magician. You have to make the magic happen.” ~ Sidney Sheldon, Are You Afraid of the Dark? Halloween is around the corner, so it’s a great time to engage kids with themes that explore the mysterious, dark, and terrifying. These are themes you probably haven’t broached yet. However, most of these themes offer a way to teach children English as well as science and math. The idea is to get students to experiment and explore. Do You Believe in Magic? Kids enjoy learning about witches and wizards, which is why Harry Potter is one of the most watched films. Magic potions – In pairs, students create magic potions to solve problems they face. Eeek! Monsters are fun for kids. Draw my monster – Students draw monsters, then are put in pairs. Zombies Older kids will enjoy exploring language by learning about zombies. Surviving a zombie apocalypse – Divide students in groups and tell them the world has been infested with zombies. Ghosts Where would I haunt?

Home | Archiving Early AmericaArchiving Early America | Your Window Into America's Founding Years! Best of History Web Sites Spooky Science Ideas By Deva Dalporto With all of its creepy, spooky elements, Halloween is a great time for some mad science! Here are four freakily fabulous science experiments that will chill and thrill your students: DIY Creepy Lava Lamp: Teach your students about polar molecules with this great, ghoulish activity. It’s easy and has a big “wow” factor. Black Dry Ice Bubbles: Halloween is a great time to bust out the dry ice and teach your students about the properties of carbon dioxide. Slime Time: Get your hands dirty and give your students a lesson in polymers with this icky, sticky experiment. Ghost Dance: Give your students a lesson in static electricity with this spooky ghost experiment.

Notable Social Studies Trade Books For Young People 2016 Notable Social Studies Trade Books for Young People (NCSS member login required) The following books were inadvertently left off of the printed list, but have been included in the online list: Seeds of Freedom by Hester Bass, published by Candlewick Press, and Wangari Maathai: The Woman Who Planted Millions of Trees by Franck Prévot, published by Charlesbridge. Download pdfs of previous Notables (by year) that are attached at the bottom of this page. The books that appear in these annotated book lists were evaluated and selected by a Book Review Committee appointed by National Council for the Social Studies (NCSS) and assembled in cooperation with the Children's Book Council (CBC). Books selected for this bibliography are written primarily for children in grades K-8. Publishers' names appear in abbreviated form; complete names and addresses are available in such standard reference works as Literary Market Place (Bowker) and from the Children's Book Council (CBC).

Spellbook My love potion Here I stir my witches brew, to make someone fall in love with you. with a dash of pox, and a dead man's toe, grass from a yard where fungus grows. some oil of boil, a dead snake's tail add some powdered kisses, and this can not fail! a jack o' lantern's grin, some pre-boxed beauty, add a drop of wine, and this potion is your booty!! A transformation spell i want to fly! add one quart of blood, and six rabbit's feet, im really getting this, i can't be beat!! an eye from a newt, a finger from the dead, then turn three times, and pluck a hair from my head a big juicy tongue, an old garbage can, say: GOBBELDY GOOK AND OL FLIM-FLAM, and a nice old,rotten ham. now stir to a boil, mix it well, on my command, begin thy magic spell!!! Both by Danielle, aged 12 A warning to nasty children out there Change your ways or else beware. To your cauldron add some spice- Wicked children are made nice. A rotten apple and a goldfish bone To melt their thoughtless hearts of stone. By Phoenix