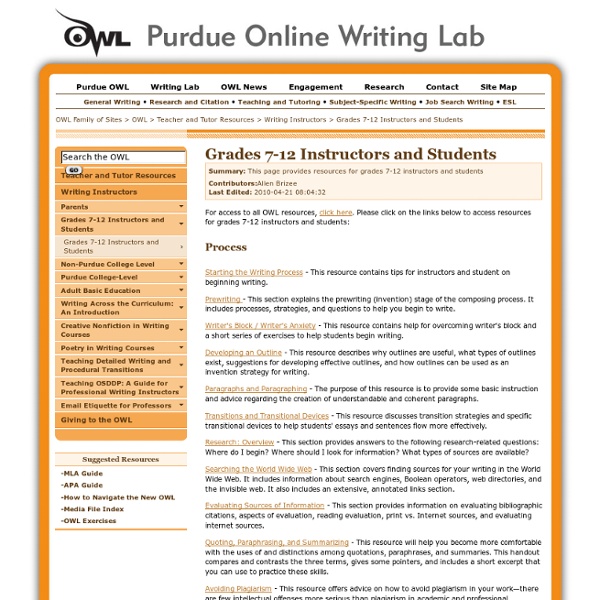 Summary: This page provides resources for grades 7-12 instructors and students Contributors:Allen BrizeeLast Edited: 2014-02-12 02:17:56 For access to all OWL resources, click here. Please click on the links below to access resources for grades 7-12 instructors and students: Process Starting the Writing Process - This resource contains tips for instructors and student on beginning writing. Prewriting - This section explains the prewriting (invention) stage of the composing process. Writer's Block / Writer's Anxiety - This resource contains help for overcoming writer's block and a short series of exercises to help students begin writing. Developing an Outline - This resource describes why outlines are useful, what types of outlines exist, suggestions for developing effective outlines, and how outlines can be used as an invention strategy for writing. Research: Overview - This section provides answers to the following research-related questions: Where do I begin? Rhetoric and Logic Citation

10 tips for writing an essay Rather than worrying about an essay for weeks, suggest to your child to read through these 10 points, get in some early preparation and have the self-belief that they can do it. Read the essay question carefully Highlight key words. Use the dictionary to check the meaning of any unfamiliar words. Identify the task words that indicate what needs to be done, eg ‘discuss', ‘explain', ‘compare'. Identify the topic words that indicate the particular subject of the essay, eg the character of ‘Juliet' in Shakespeare's Romeo and Juliet, the ‘causes' of World War 1. Novels to Know: Middle School Edition As part of our preparation for Common Core standards our district asked the librarians to put together a list of noteworthy novels that would help meet the higher standards for text complexity and reading level. My two middle grade partners, Monique German and Kristen Hearne, and I will be putting together the list for our level. Priority number one for me was to become as much of an expert on Common Core as I can so I have been spending time learning the details of our new standards.

Experimental Game Turns Players into Poets and Writers What do British Romantic Era poets and video games have in common? The answer is Elegy for a Dead World, an unlikely game that leaves the players with “no game to play,” but to explore three long-dead civilizations, observe, and make notes... or stories — or poems — or songs. The three lost worlds feature beautiful scenery, moving music, and are inspired by Percy Shelley's Ozymandias, Lord Byron's Darkness, and John Keats' When I Have Fears That I May Cease to Be. They create a strong, moody atmosphere that becomes the breeding ground for feelings and ideas. The game began in 2013 as a collaboration between Dejobaan Games and Popcannibal.

What makes an image unforgettable? Joe Rosenthal's 1945 photograph of U.S. troops raising a flag in Iwo Jima during World War II remains one of the most widely reproduced images. It earned him a Pulitzer Prize, but he also faced suspicions that he staged the patriotic scene. While it was reported to be a genuine event, it was the second flag-raising of the day atop Mount Suribachi. The first flag, raised hours earlier, was deemed too small to be seen from the base of the mountain. Fountas & Pinnell The Common Core Standards for Language and Literacy and The Continuum of Literacy Learning, Grades PreK–8: A Guide to Teaching There is a strong relationship between the new Common Core Standards for Language and Literacy and Fountas and Pinnell’s The Continuum of Literacy Learning. The goal of both documents is to ensure that all students are college-/and career-ready literate no later than the end of high school. The curriculum goals specifically detailed in the Continuum reach for this high level of skill by the end of eighth grade.

Thesis Statements What is a Thesis Statement? Almost all of us—even if we don’t do it consciously—look early in an essay for a one- or two-sentence condensation of the argument or analysis that is to follow. We refer to that condensation as a thesis statement. Why Should Your Essay Contain a Thesis Statement? Common-Core Writers Craft Curriculum Criteria Published Online: July 22, 2011 New guidelines on crafting curriculum materials for the common standards in English/language arts are reigniting debate about how to ensure a marketplace of good instructional materials for the new standards without crossing the line into telling teachers how to teach. The focal point of the conversations is a set of “publishers’ criteria” issued recently by the two lead writers of the English/language arts section of the common standards, which have been adopted by all but five states. Working under a contract with the Bill & Melinda Gates Foundation, an avid backer of the standards, David Coleman and Susan Pimentel wrote a pair of documents highlighting the key ideas of the standards and describing the qualities of instructional materials they consider a faithful reflection of them.

The Tank Man This is a picture that needs no caption. However, very few people know or care about the exact details of the events that transpired on June 5th, 1989. The day after Chinese troops expelled thousands of demonstrators from Tiananmen Square in Beijing (in a process that left thousands dead), the tanks returning from their mission at the Square were confronted with a lone rebel. The rebel’s identity is never revealed nor that of the commander in the lead tank who stopped. The purely symbolic act was instantly captured on video and on cameras–whether the unknown rebel deliberated planned his protest in front of the Beijing Hotel where the press corps reside is also an equal mystery. As Time magazine wrote, “[He] may have impressed his image on the global memory more vividly, more intimately than even Sun Yat-sen did.

Common Core Video Series Education Commissioner John King, David Coleman and Kate Gerson explain every key aspect of Common Core standards in depth. By viewing this 15-part series, New York educators and administrators will learn step-by-step how to implement the Common Core for ELA/Literacy and Math in their schools and classrooms. You’ll also gain a deeper understanding of the rationale behind the Common Core and what it will mean for students across our state. Produced in partnership with NYS PBS stations WCNY/Syracuse and WNET/New York City, the series illuminates the Common Core through conversations between Commissioner King, a former high school social studies teacher and middle school principal; Coleman, a contributing author of the Common Core State Standards; and Gerson, a Senior Fellow with the USNY Regents Research Fund and a former high school English teacher and principal. Viewing the Videos The Common Core videos can be viewed online or downloaded from the links below for offline viewing.

Migrant Mother Dorothea Lange was one of the photographers hired by the Farm Security Administration (FSA) to document the social condition as a result of the Depression. Exhausted from photographing farms in Nipomo, California, Lange turned down a dirt road to investigate a migrant camp of pea pickers. In less than fifteen minutes, Lange was back on the road after making five exposures of a woman (Florence Thompson) and her children in the camp. Lange thought Thompson’s nervous gesture of placing her hand on her mouth as dignified and framed one of the photos to echo Madonna and child, and American values of endurance in the face of adversity, and submitted it (titled Migrant Mother) to her agency. The next day, the photo appeared on the front page of the San Francisco News and became instantly famous, putting a human face to the Great Depression. Florence Thompson, then aged 33, was of Cherokee Indian descent and was mother of 7 children.

Are We Really Still Assigning Book Reports? 20 Ways to Encourage Students to Interact with Texts Traditional book reports should be a thing of the past. I mean, do you really want to read 30-125 recaps of the same book? (YAWN!) Exposing of A Gestapo Informer In Dessau, at a camp of displaced persons waiting for repatriation, a Gestapo informer who had pretended to be a refugee is discovered and exposed by a camp inmate. Cartier-Bresson draws the audience right into the middle of that anguished circle of the formerly wronged and the abused. The judge’s dazed aplomb was contrasted with the denouncer’s rage, the informer’s resignation, while faces of anguish and anger framed the picture in a modern day Greek chorus. Henri Cartier-Bresson, himself once a German prisoner-of-war, took the photo between 21 April and 2 July 1945, between the American occupation of the city and the arrival of their Russian replacements.

The Execution of A Vietcong Guerilla Feb 1, 1968. There were a lot of pictures taken during the Vietnam War-those of burning monks, fallen soldiers and whirling helicopters. But this picture by Eddie Adams is the one that defined the conflict and changed history. In the sharp contrast with Capa’s Falling Solider, personalities and identities did matter a lot in this picture. Amazingly, the picture that polarized the American public and shown the personal nature of the Vietnam War did not involved any Americans. It was the gunshot heard all over the world; Italian photographer and designer Oliviero Toscani compared it to Caravaggio’s 1598 painting, “Judith Beheading Holofernes.”