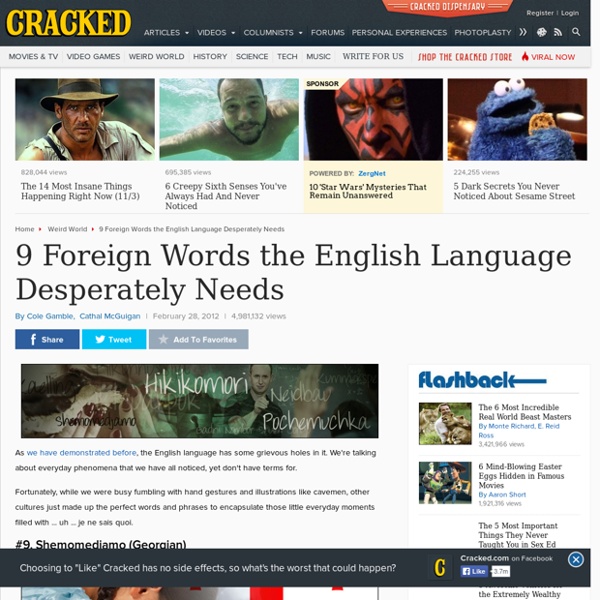 As we have demonstrated before, the English language has some grievous holes in it. We're talking about everyday phenomena that we have all noticed, yet don't have terms for. Fortunately, while we were busy fumbling with hand gestures and illustrations like cavemen, other cultures just made up the perfect words and phrases to encapsulate those little everyday moments filled with ... uh ... je ne sais quoi. #9. Means: To eat past the point of being full just because the food tastes good. Here is a word that describes such a quintessentially American phenomenon it's shocking that another culture came up with it first. As absurd as that may sound, keep in mind that America has a holiday devoted entirely to shemomedjamo in November. GettyPatriotism comes breaded and deep fried. The literal translation for shemomedjamo is "I accidentally ate the whole thing," which is a charming way of saying "Oh my God, why isn't somebody stopping me?!" Which neatly brings us to ... #8. #7. GettyNo idea. #6. #5.

泥だんご Japanese German by Kayo, Fumio ・・・・2002/3(Japanese version) 2003/12(English version) translated by MES mystery tomato miracle [Items you must have] 1.Nice weather of 2-3 days duration, completely dry soil, a small quantity of water, and your trustful hands. 2.Company with whom you can chat and work together. 3.A soft material such as a dry dust cloth (a safe place on which you can rest the ball) [Items you will find it convenient to have] 1.Plastic bags (cheep transparent bags for cooking) 2.Polishing cloth (Jersey or cheap stockings are the best) Wet the soil as shown in the picture, compress it hard with the hands, and make a ball that serves as the core. The principle is to forget about shining and to concentrate on making something round. During <the first 2-3 minutes> the surface of the ball is sufficiently wet, and occasional rough handling is permitted. <The next 30-40minutes> is the stage of making a smooth surface. a variety of roughness click to a smooth sphere ...

5 Great Men Who Built Their Careers on Plagiarism As anyone here at Cracked will tell you, without even the slightest provocation, writing is hard. When the strain of coming up with new material becomes too great to bear, a writer has two options: He can pepper his work with penis jokes and pictures of cute animals (see our entry on T.S. Eliot, below), or he can steal his words from a better writer. Occasionally, a brilliant (or at least sort of clever) mind comes across a bad spell of writer's block and gives into the temptation to be a cheating plagiarist. What'd He Do? In a nutshell, Ambrose invented pop history. "You know, the Nazis had little pieces of flair they made the Jews wear." Ambrose also wrote award-winning biographies on Presidents Eisenhower and Nixon. What's the Problem? In 1995, an almost unknown historian named Thomas Childers published the book Wings of Morning. In the writing business, that's what we call "textual rape." Show me on the table of contents where Dr. Is That All? "Holy shit. Did He Pay? He really didn't.

Proof That The World Is Nuts » The WVb In Lebanon, men are legally allowed to have sex with animals, but the animals must be female. Having sexual relations with a male animal is punishable by death. (Like THAT makes sense.) In Bahrain, a male doctor may legally examine a woman’s genitals, but is prohibited from looking directly at them during the examination. (Do they look different reversed?) Muslims are banned from looking at the genitals of a corpse. (A brick??) The penalty for masturbation in Indonesia is decapitation. (Much worse than “going blind!”) There are men in Guam whose full-time job is to travel the countryside and deflower young virgins, who pay them for the privilege of having sex for the first time Reason: under Guam law, it is expressly forbidden for virgins to marry. (Let’s just think for a minute; is there any job anywhere else in the world that even comes close to this?) In Hong Kong, a betrayed wife is legally allowed to kill her adulterous husband, but may only do so with her bare hands. (Ah! (Ah, geez.) 1.

Dequalized 6 Horrifying Implications of the Harry Potter Universe We have a feeling that Harry Potter is never going away, in the sense that franchises like Batman and Star Wars never went away (and Star Wars never got its own amusement park). And why not? It's the perfect storm of wonder, charm and innocent, family-friendly adventure that everyone can enjoy. Which is why we love talking about how pants-crappingly terrifying that whole universe is. For instance ... #6. In the Harry Potter universe, the people in photographs and paintings can move and talk. "I am innocent but love screaming like a madman." And as such, some portrait subjects serve as security guards for locked rooms, while others are used as errand boys to deliver urgent messages (they can travel to any room that also has a painting). Dumbledore is asleep all the time? The Horrific Implications: Who cares, right? Especially if getting attacked and slashed up is just considered property damage. That brings us to our second point. One of the crappier animated gifs available. #5. "Arrgh! #4.

Facebook Fiascos: 15 of the Worst Facebook Fails to Make You LOL Although Facebook is a highly convenient way for people to keep in touch with their loved ones, sometimes the sharing we do on Facebook can have disastrous results! Updating your status badmouthing your boss without realizing that your boss in your friendsâ€™ list is one of the most common mistakes many Facebook users make. Apart from such blunders, there are other friends who leave unexpected comments on your posts and photos. All of this works together to provide us material for our todayâ€™s list â€“ 15 of the worst Facebook Fails. Camping Knots for Wilderness Survival By Filip Tkaczyk Knowing how to tie good camping knots is an invaluable skill in wilderness survival situations. Its also a great asset when having fun in the outdoors. Square Knot Also called a reef knot, this knot is useful for tying bandages, packages and joining shorter pieces of rope together. To begin, lay the ends of the ropes parallel and then pick up a rope in each hand. Now tie an overhand knot as you would for tying your shoe laces by putting the right end under and over the left rope end. Then tie another overhand knot, this time putting the left end under and over the right rope. Completed Square Knot Clove Hitch Like all hitches, this camping knot ties a rope to an object. To begin, bring the rope end over and under the post. Now, bring the rope end around a third time, and tuck it under the center of the X. Tighten by pulling the end and the main line apart. Bowline One of the most important camping knots to learn is the bowline knot. Related Courses:

Hasegawa Yosuke makes origami out of dolla dolla bills Jul 27, 2012 Money: you love it or hate it, or pretend to hate it, or merely tolerate it, but whatever the case, unless you’re communing with god on an ashram or totally comfortable dumpster diving and sleeping under bridges, it’s a pretty big part of your life. And as a wise man once said (probably), it’s not how much money you have, it’s what you do with what you’ve got. Hasegawa Yosuke, for example, folds dollar bills (and rupees and yen and pesos, etc) into the faces of little historical figures, usually wearing some sort of culturally specific hat. Check out many, many more of Yosuke’s little money faces here.