I need a guide 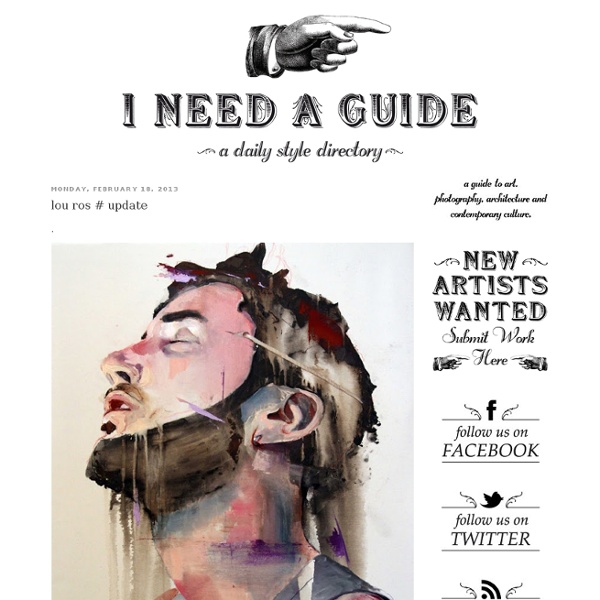 A Crisis of Anxiety Among Aid Workers Photo An idyllic Mediterranean beach in Tunisia is not usually a place of high anxiety, but that’s where I spent the worst day of my life. I hadn’t slept in three nights and called in sick to work because I could no longer think. I felt I was losing my mind and spent the day as a zombie on the beach, feeling empty and alone on the sand. It was 2011 and the Libyan war was at its height. nat the fat rat / happiness curator / lover of anne of green gables / just another mormon hipster mommy blog / Nat The Fat Rat: ON ADVENTURE "to live would be an awfully big adventure" the thing i loved best about living in idaho was that adventure seemed to be around every corner. truthfully, my little town in idaho was quaint and lovely, but boring as all get out. it wasn't until i decided to find adventure that anything interesting ever happened to me. but once i looked for it, there it was! i never had so many adventures in my life as i had while living in idaho.

Get Swinging in Boston on these Glowing LED Hoops In Boston, playgrounds are no longer just for kids. Twenty LED-lit circular swings have been installed outdoors as a part of "Swing Time," Boston's first interactive sculpture installation. The hanging, glowing orbs are a twist on traditional rubber-and-rope swings, dangling from a minimal steel structure similar to those used in conventional playgrounds. LED lights embedded in the swings activate and change color as each swing moves, returning to a dim white light when static. The piece is designed to blend Boston's design community with its expanding technology sector while playfully engaging residents.

RSA House chandeliers by Troika These chandeliers by London designers Troika use large fresnel lenses to shape the light from LEDs suspended below them into overlapping geometric patterns on the ceiling of the Royal Society of Arts' headquarters in London. The two chandeliers form part of a refurbishment project by Matthew Lloyd Architects, due for completion this summer. Corian rings frame the lenses, suspended above the polished brass cradles that each contain eight high-power LEDs.

Healthcare blame game: What hospitals charge vs. what they get paid Healthcare blame game: What hospitals charge vs. what they get paidBy Dr. Jonathan Kaplan A recent article by The Washington Post discusses a new era in price transparency at first glance. The Centers for Medicare and Medicaid Services, the federal agency that pays hospitals and doctors for services rendered to patients, released the prices hospitals charge for the 100 most common inpatient procedures. A Guide to Preparing Files for Print With this guide, we are going to examine ways to prepare files for print, covering applications in the Adobe Creative Suite. The examples used are for InDesign, but can apply to Photoshop and Illustrator. This is a basic guide aimed to help people just starting out in the print design business or are looking to learn more about preparing files better to send to press. Understand the Basics With most print jobs, you should have specifications to adhere to.

CMYK lamp by Dennis Parren Dutch Design Week: this lamp by designer Dennis Parren casts a network of coloured shadows. Three different-coloured LEDs project light upward from a circular platform at the base of the CMYK lamp, past thin white metal bars that split the light to cast cyan, magenta and yellow shadows onto surrounding surfaces. Red, green and blue shadows are created where the different colours overlap. Cyan, magenta and yellow, along with black, make up the CMYK subtractive colour model used in printing, while red, green and blue make up the RGB additive colour model common to electronic screens.

The Jewish brain : A technical analysis of its psychotic tendencies - The Phora The Jewish brain : A technical analysis of its psychotic tendencies By Frank Sprinklehopper (Ashkenazi Jew and Scientist) Nov 2008. Now that i have cooled down a little, Draft 2 of this essay has been modified inline with another project which understands sub population behaviour such as jewish operating as a niche in complex system evolution. To summarize the jewish system is purely an expression of the dopamine role within the brain..in effect the jewish system behaves like dopamine. This theory will be falsifiable in the next few years, when non ashkenazi genomes are scanned for alterations on chromosome 10q21.3-10q22.3. and their rates of dopamine dysfunction calculated. (2) "In claiming the status of victim and by assigning all blame to others, a person can achieve moral superiority while simultaneously disowning any responsibility for one's behaviour and its outcome. The victims 'merely' seek justice and fairness.

fellowfellow Hello hello! It’s DIY time again! :) Did you like last week’s All-Natural Aftershave DIY? This week Militza from Little Green Dot and I have teamed up again to bring you a scrummy Myrrh & Palmarosa Lip Balm. Metronomy explores the Barbican Estate in music video by Callum Cooper Music: tying in with our series on Brutalist architecture, this music video by director Callum Cooper follows British band Metronomy around London's Barbican Estate (+ movie). After hearing Metronomy's latest track Month of Sundays, Callum Cooper pitched the idea for a video created using spinning camera effects that make the viewer feel as if they're moving. "The effect I wanted to create was that of circular vection or more widely the illusions of self-motion," Cooper told Dezeen. The video captures the four band members among the raw concrete structures, elevated walkways and curving stairwells of the estate, which was designed by Chamberlin, Powell and Bon in the 1950s and officially opened in 1982.