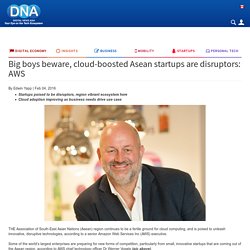 Some of the world’s largest enterprises are preparing for new forms of competition, particularly from small, innovative startups that are coming out of the Asean region, according to AWS chief technology officer Dr Werner Vogels (pic above). In a conversation with Digital News Asia (DNA) in Kuala Lumpur recently, he said many companies are engaged in digital transformation projects today, and this is one of the major drivers of cloud adoption. Digital transformation is no longer a corporate experiment or even a marketing sideshow, but underpins everything enterprises are doing to gain a competitive advantage, he argued.

Why VCs don't invest in 'good' companies. Every VC says they are looking for great founders that are solving real problems in big markets. 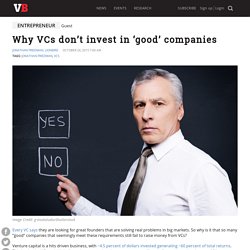 So why is it that so many “good” companies that seemingly meet these requirements still fail to raise money from VCs? Venture capital is a hits driven business, with ~4.5 percent of dollars invested generating ~60 percent of total returns. This is why the VC model is built on the expectation that most returns will come from companies that pay 10X+ on investment, and on the expectation that many investments will lose money. Most founders already know this. The most expensive Apple Watch is going to make Apple all the money. The Wall Street Journal is reporting that Apple's Watch production for the first quarter of this year is on track for 5 million units. 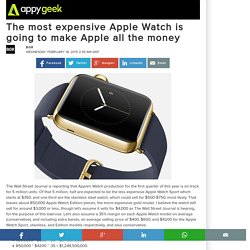 Of that 5 million, half are expected to be the less expensive Apple Watch Sport which starts at $350, and one third are the stainless steel watch, which could sell for $500-$750, most likely. That leaves about 850,000 Apple Watch Edition pieces, the more expensive gold model. What do I do now? The startup lifecycle. Last week I got a call from Patrick, an ex-student I hadn't heard from for eight years. 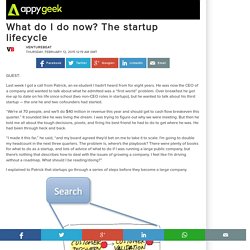 He was now the CEO of a company and wanted to talk about what he admitted was a “first world” problem. Over breakfast he got me up to date on his life since school (two non-CEO roles in startups), but he wanted to talk about his third startup — the one he and two cofounders had started. “We're at 70 people, and we'll do $40 million in revenue this year and should get to cash flow breakeven this quarter.” It sounded like he was living the dream. I was trying to figure out why we were meeting. “I made it this far,” he said, “and my board agreed they'd bet on me to take it to scale. I explained to Patrick that startups go through a series of steps before they become a large company. 馬云：『想要月入20萬以上，請先學會這些』趕緊收藏. 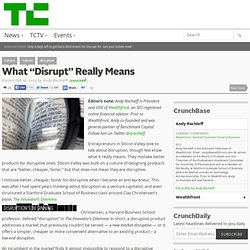 Prior to Wealthfront, Andy co-founded and was general partner of Benchmark Capital. Follow him on Twitter @arachleff. Entrepreneurs in Silicon Valley love to talk about disruption, though few know what it really means. They mistake better products for disruptive ones. How Much Are Your Customers Really Worth? Different types of businesses require different measures of success or growth — one man's metric is another's trash, you might say. 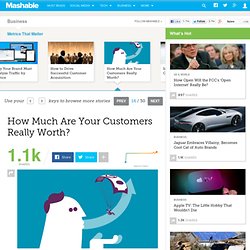 This is especially true for revenue per user. Revenue per user is calculated by dividing total revenue by total users, and is used to understand growth and distinguish if some customers are more valuable than others. As business models evolve, it may be more accurate to calculate revenue per user strictly for your monthly active users as opposed to total users. The metric was historically used for service providers such as a telecommunications company. The main revenue stream would be a subscription, but value-add services and other revenue streams could be taken into consideration with revenue per user. Now, revenue per user is useful for both businesses based on subscriptions, media companies and social networks — but not retail. Uses of Revenue Per User A similar comparison comes from Pandora and Sirius. Competing Metrics. Forget Mega-Corporations, Here’s The Mega-Network.

We live in the age of cryptocurrency heists, Chinese moon landings, eco-disasters and electronic cigarettes. 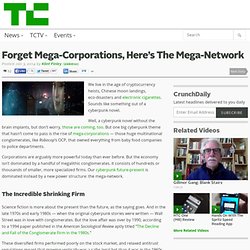 Sounds like something out of a cyberpunk novel. Well, a cyberpunk novel without the brain implants, but don’t worry, those are coming, too. But one big cyberpunk theme that hasn’t come to pass is the rise of mega-corporations — those huge multinational conglomerates, like Robocop‘s OCP, that owned everything from baby food companies to police departments. Corporations are arguably more powerful today than ever before. But the economy isn’t dominated by a handful of megalithic conglomerates. it consists of hundreds or thousands of smaller, more specialized firms.

The Incredible Shrinking Firm Science fiction is more about the present than the future, as the saying goes. The fall of the conglomerate corresponded with white-collar downsizing, the rise of “permatemping,” and a general tendency towards smaller firms.