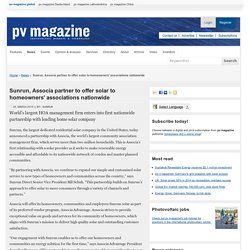 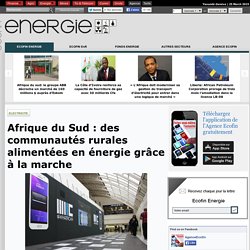 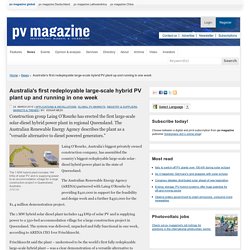 March 2015 | Applications & Installations, Global PV markets, Industry & Suppliers, Markets & Trends | By: Ian Clover The Chinese PV developer will partner with Aqua Clean Energy on the co-development of floating PV projects in four U.S. states as well as Mexico. The JV will manage the creation of 50 MW of floating PV projects in the U.S. and Mexico. Infratech Solar Power, Inc. Both companies will co-develop the projects as part of the JV holding company, Aqua Clean Energy Fund, LLC, and are working on identifying a 50 MW pipeline in the U.S. states of California, Arizona, Texas and New Mexico, as well as further projects in Mexico.

SPI and ACE will implement an innovative floating solar platform for the projects, enabling the installation of PV panels on large bodies of water such as quarry lakes, reservoirs, irrigation canals and remediation and tailing ponds. Sunnova introduces 'zero down' residential solar: pv-magazine. 18. 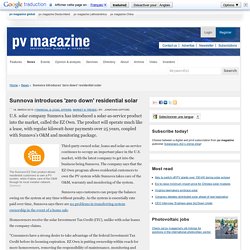 March 2015 | Financial & Legal Affairs, Market & Trends | By: Jonathan Gifford U.S. solar company Sunnova has introduced a solar-as-service product into the market, called the EZ Own. The product will operate much like a lease, with regular kilowatt-hour payments over 25 years, coupled with Sunnova's O&M and monitoring package. The Sunnova EZ Own product allows residential customers to own a PV system, while it takes care of the O&M through its local installer network. Dominion Virginia Power to install Virginia's largest solar installation to date at Philip Morris USA: pv-magazine. 18. 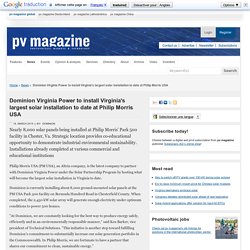 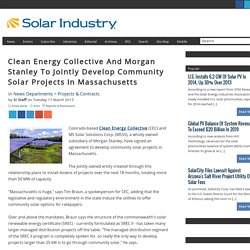 (MSSS), a wholly owned subsidiary of Morgan Stanley, have signed an agreement to develop community solar projects in Massachusetts. The jointly owned entity created through this relationship plans to install dozens of projects over the next 18 months, totaling more than 50 MW of capacity. "Massachusetts is huge," says Tim Braun, a spokesperson for CEC, adding that the legislative and regulatory environment in the state induce the utilities to offer community solar options for ratepayers. Over and above the mandates, Braun says the structure of the commonwealth's solar renewable energy certificate (SREC) - currently formulated as SREC II - has taken many larger managed distribution projects off the table. "The managed distribution segment of the SREC II program is completely spoken for, so really the only way to develop projects larger than 25 kW is to go through community solar," he says. U.S. Solar Developers Dominate Global Top 10.

U.S. companies occupy four of the top five places for developing utility-scale solar projects, according to a new analysis from Wiki-Solar. 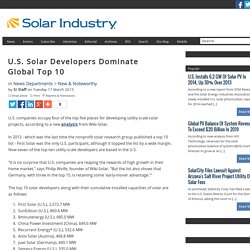 In 2013 - which was the last time the nonprofit solar research group published a top 10 list - First Solar was the only U.S. participant, although it topped the list by a wide margin. Now seven of the top-ten utility-scale developers are based in the U.S. "It is no surprise that U.S. companies are reaping the rewards of high growth in their home market," says Philip Wolfe, founder of Wiki-Solar. "But the list also shows that Germany, with three in the top 15, is retaining some 'early-mover advantage.'" Des écolières nigérianes se font souffler leur invention de production d’électricité à base d’urine. Smart Villages launches Energy Innovation Challenge: pv-magazine. 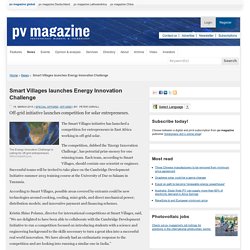 Answer by Alejandro Morell (Creara) Concept of ESCO and EPC ESCO is a firm that provides solutions for achieving energy cost reductions, and whose overall compensation can be linked (in part or in full) to the performance of the implemented solutions. In that context, an ESCO can handle projects, mobilize financial resources (not necessary its own equity), offer turn-key services (either on its own or through collaborating with other market player) and assume performance risks. “Energy Performance Contracting”, EPC, means a contractual arrangement between the beneficiary and the provider of an energy efficiency improvement measure, verified and monitored during the whole term of the contract, where investment in that measure are paid for in relation to a contractually agreed level of energy efficiency improvement or other agreed energy performance criteria, such as financial savings.

Which are the advantages of an ESCO project? California Solar Developer Sees Drones As Labor-Saving Devices. CalCom Solar, a Visalia, Calif. -based engineering, procurement and construction firm for solar photovoltaic installations, is testing the waters of unmanned aerial vehicles (UAVs) and, in the process, seeing a slew of future applications. Nic Stover, the company's CEO, is no stranger to the technology: The final project of his Master's degree program last year involved the applications of UAVs in agriculture, where there is a "tremendous need" for unmanned aircraft. CalCom Solar, which specializes in developing solar projects on agricultural land, is in a nascent stage of using UAVs, he says. Operating a DJI Phantom 2, the company has captured - through both photo and video - aerial views of several completed solar projects, including a 1 MW ground-mounted array on a tomato farm in Firebaugh, Calif.

“The municipal utility in Colorado Springs was able to write its own rules without having to go through a lengthy public utilities process,” Amster-Olszewski says. “This enabled us to pilot the model. Then, we moved into the Xcel market in the more populous areas around the Denver area once those programs opened up.” SunShare is moving aggressively in the community solar market. Construction begins on Australia's first floating PV array. 06. March 2015 | Applications & Installations, Market & Trends | By: Jonathan Gifford South Australia is set to be the location for Australia's first floating PV array. Construction is under way on the components for a 4 MW floating PV power plant, which is scheduled to begin producing electricity in April.

Infratech will finance, own and operate the plant, selling the electricity generated to local businesses and the water treatment plant. NVI Energy's Solar4Africa: 'One-stop-shop' funding. 05. March 2015 | Applications & Installations, Financial & Legal Affairs, Global PV markets, Industry & Suppliers, Markets & Trends, Investor news | By: Peter Carvill It could be posited with reason that the off-grid solar market is still one that is finding its feet, and still in the period that all new industries go through as it tries to make sense of how it can best serve its market.

Innovative financing techniques are emerging as the offgrid market matures, in this the first in a series of articles on innovation in the offgrid space. MENA: Adenium Energy Capital, Enerwhere sign $10 million investment deal for mobile solar systems: pv-magazine. 05. How Results Based Financing is spurring solar market development in Tanzania. By Martijn Veen, Josh Sebastian & Maarten Kleijn, SNV Tanzania With only 14% of Tanzanians having access to electricity and a vast majority of the country expected to remain off-grid for the coming decades, innovative financing mechanisms are needed to spur last-mile distribution of clean energy solutions.