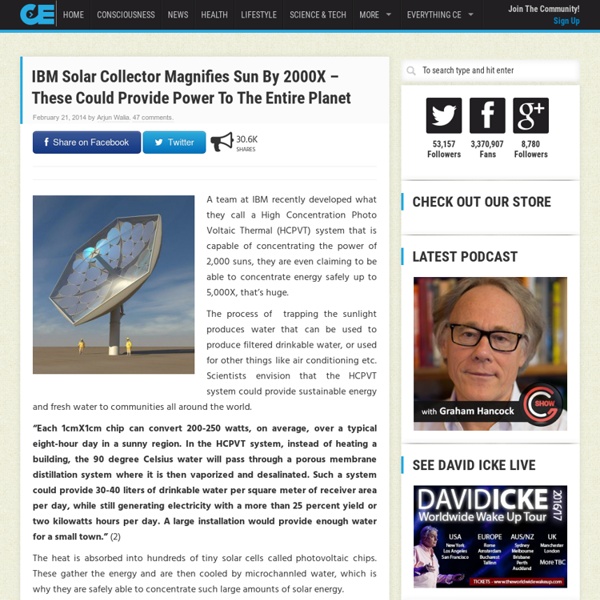 A team at IBM recently developed what they call a High Concentration Photo Voltaic Thermal (HCPVT) system that is capable of concentrating the power of 2,000 suns, they are even claiming to be able to concentrate energy safely up to 5,000X, that’s huge. The process of trapping the sunlight produces water that can be used to produce filtered drinkable water, or used for other things like air conditioning etc. Scientists envision that the HCPVT system could provide sustainable energy and fresh water to communities all around the world. “Each 1cmX1cm chip can convert 200-250 watts, on average, over a typical eight-hour day in a sunny region. The heat is absorbed into hundreds of tiny solar cells called photovoltaic chips. According to Greenpeace, this technology can establish itself as the third largest player in the sustainable power generation industry. A common problem with modern-day solar collectors is that they can only take in a minimal amount of energy. Related Topics: Free Energy Related:  Inventions

The Solar Sunflower: Harnessing the power of 5,000 suns Sebastian Anthony Behold, the Solar Sunflower! Here they are trying a bunch of different reflector materials, which is why the segments all look slightly different. Sebastian Anthony Behold, the Solar Sunflower! High on a hill was a lonely sunflower. The Solar Sunflower, a Swiss invention developed by Airlight Energy, Dsolar (a subsidiary of Airlight), and IBM Research in Zurich, uses something called HCPVT to generate electricity and hot water from solar power. The two constituent technologies of the Solar Sunflower—concentrated solar thermal power and photovoltaic solar power—are both very well known and understood at this point, and not at all exciting. The reflectors are simply slightly curved, mirrored panels. The collectors are where most of the magic occurs. Photovoltaic cells, like most semiconductors, become less efficient as they get hotter. How then do you stop your collectors turning into very expensive puddles of molten metal? Cooling with hot water? Airlight Energy

EWAO Nigerian Man Turns A VW Beetle Into A Solar And Wind Powered Car This is one of the coolest ideas and to top it off it’s completely reasonable too! Segun Oyeyiola was a student at Obagemi Awolowo University and while he was in attendance there, he converted his gas thirsty Volkswagen into a completely green energy machine by installing a large solar panel on the top of the car, with an additional wind turbine underneath the hood. His idea is to have his concept of his new invention to become “Nigeria’s future car.” At birth, the battery took 4-5 hours to charge, that was definitely not ideal. Yet the largest challenge, according to Mr. Check out this animation of a solar/wind-powered vehicle, illustrating how the batteries are charged via the multiple turbines. The roof houses a mounted solar honeycomb-membrane panel which absorbs and collects the rays of the sun when parked and while it’s on the go, transferring that energy to the main energy housing located in the back of the vehicle. Story credits: nhabitat.com fastcoexist.com Minds

Self-Healing Solar Cells -- Vascular Channels Based On Plant Leaves Allow For Self-Healing In New Solar Cells Clean Power Published on August 15th, 2013 | by James Ayre Self-healing solar cells — possessing “vascular” networks similar to those in plant leaves — have now been created by researchers from North Carolina State University. North Carolina State University explains: In their new paper, the researchers show that creating solar cell devices with channels that mimic organic vascular systems can effectively reinvigorate solar cells whose performance deteriorates due to degradation by the sun’s ultraviolet rays. “The design of NC State’s regenerative solar cell mimics nature by use of microfluidic channels.”Image Credit: North Carolina State University “Organic material in DSSCs tends to degrade, so we looked to nature to solve the problem,” stated lead researcher Orlin Velev, who’s also the Invista Professor of Chemical and Biomolecular Engineering at NC State. The research was funded by the National Science Foundation and the US Department of Energy. About the Author

German Engineer 3D Prints World’s First Solar Powered Stirling Engine Each and every day, I am blown away in yet another way by all of the new innovations that have quickly been coming into existence within the 3D printing space. It seems as though just a couple years ago no one even knew what 3D printing was, and today we have everything from 3D printed houses to 3D printed cars, prosthetic hands, electronics, and more. It makes me wonder just how much further along we will be in the next five or ten years. Haeuser himself is known for designing and creating several unique 3D printable devices, such as the “RepRap Windturbine.” Haeuser has designed and created the world’s first known 3D printed solar powered Stirling engine, an engine that runs completely off of the sun’s heat. “At the moment, a lot of people try to build Stirling engines with a 3D printer,” Haeuser explains to 3DPrint.com. His engine is powered using the solar rays of the sun to provide the engine with enough heat to make it run. “At this moment it’s a small engine,” Haeuser tells us.

Design Concepts | V3SOLAR Power Tree™ – Design Concept While land constraints have not been a primary concern for solar deployment in the past, this is certain to change. According to the DOE, the world currently uses about 15,000 GW of power and by the year 2050 the world will require approximately 30,000 GW. To satisfy this demand over the next 40 years, it would require building more than 1GW power plant each and every day! The Spin Cell™ can also be mounted in an array of “Power Trees” (illustration to the left), further reducing space needed for deployment as well as opening up new market opportunities — think parking lots and street lighting. Another inherent benefit of a Power Tree™ is the ability to operate Spin Cells™ above potential flood lines. Spin Cell™ solar farms can be built to include monitoring for each Spin Cell™, linked directly to a control room to maximize energy output and the overall performance of the individual Spin Cell™ or farm of Spin Cells™.

Tata Steel to Turn Steel Sheets into Solar Cells Using Spray-on PV Coating | Earth & Industry A group of organisations including Tata Steel-led Corus and Swansea University (Wales, UK) are developing a new technology that would convert steel sheets into power generating solar cells. The technology involves coating steel sheets with photo-sensitive dyes. The technology has significant applications since it is highly efficient even in diffused sunlight. Therefore, countries at higher latitudes or those with limited solar energy resource can generate significant amounts of solar-powered electricity with going for large-scale power plants. If extended, the technology can find its way to the automobile industry where photo-sensitive dyes can be applied to cars to generate electricity to split water into hydrogen and oxygen for fuel cells. Tata recently invested in an American company, Sun Catalytix, which integrates low-cost catalyst with solar-powered fuel cells to generate power. Tata has been making significant investments in the renewable energy sector, both in India and abroad.

Elon Musk Announces That SolarCity Will Create a Roof Made Entirely of Solar Panels In Brief The next project for newly acquired company SolarCity? Solar panels that aren't just added to existing roofs, it's actually THE roof. Solar Roof SolarCity, the company recently acquired by Elon Musk’s Tesla Motors, has just announced what’s next in the pipeline—a roof made entirely of solar panels. The announcement of their new “solar roof” was revealed by SolarCity chairman, Elon Musk, who says the they will not only look better but also last longer than current, traditional roofs. This would be a sleeker alternative to existing solar modules that are typically retrofitted on existing roofs. Image Credit: SMILEUS/SHUTTERSTOCK[/caption] Integration The solar roof concept will be integrated with Tesla’s backup battery packs, thus allowing a home to run solely on solar power round the clock. This kind of product shows the kind of seamless integration between both companies, which creates a product that actually answers a need for a huge segment of the market.

Forget solar panels, optical ‘rectenna’ converts light directly to electricity | Watts Up With That? From Georgia Tech, a news release that we missed when it first came out, but still well worth talking about. First Optical Rectenna – Combined Rectifier and Antenna – Converts Light to DC Current Using nanometer-scale components, researchers have demonstrated the first optical rectenna, a device that combines the functions of an antenna and a rectifier diode to convert light directly into DC current. This schematic shows the components of the optical rectenna developed at the Georgia Institute of Technology. (Credit: Thomas Bougher, Georgia Tech) Based on multiwall carbon nanotubes and tiny rectifiers fabricated onto them, the optical rectennas could provide a new technology for photodetectors that would operate without the need for cooling, energy harvesters that would convert waste heat to electricity – and ultimately for a new way to efficiently capture solar energy. “The physics and the scientific concepts have been out there,” said Cola. Like this: Like Loading...