DIY Electronics Design & Projects Kit. Neuro Evolving Robotic Operatives. Neuro-Evolving Robotic Operatives, or NERO for short, is a unique computer game that lets you play with adapting intelligent agents hands-on. Evolve your own robot army by tuning their artificial brains for challenging tasks, then pit them against your friends' teams in online competitions! New features in NERO 2.0 include an interactive game mode called territory capture, as well as a new user interface and more extensive training tools.

NERO is a result of an academic research project in artificial intelligence, based on the rtNEAT algorithm. It is also a platform for future research on intelligent agent technology. The NERO project is run by the Neural Networks Group of the Department of Computer Sciences at the University of Texas at Austin . Currently, we are developing an open source successor to NERO , OpenNERO , a game platform for AI research and education. 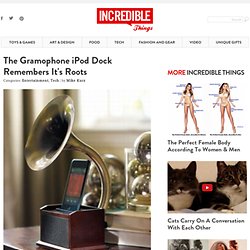 In the earliest days of music, there was the gramophone – a record player with a type of horn attached that acts as a speaker. The Gramophone iPod Dock pays homage to the early days of recorded music by providing a robust iPod dock shaped like the iPod’s ancestor. This iPod dock sounds great, and looks even better. If sleek and shiny modern iPod docks just don’t fit with your decor, the Gramophone iPod Dock might be a better fit. Via: coolmaterial.com. Cool Gadget Design: The 15 Sexiest Gadgets of 2009. Gorgeous Gadgetry: The 15 Sexiest Gadgets of 2009 Can a gadget be sexy?

There’s no doubt that a computer, a media player, a tv or a telephone can inspire a serious case of tech lust. In 2009, the trends in gadget design pushed the envelope even further, with some of the sexiest gadgets we’ve seen yet. So what did the coolest gadgets of 2009 look like? Here’s a list of the 15 sexiest gadgets (GILFs?) HP Envy Luxury Laptop If 2008 was the year of the netbook, 2009 was the year of the luxury laptop. Kelvin.23 All In One Tool. Abyss LED Touchscreen Watch. Micro-Max 19-in-1 Multi-tool. ProMini Wireless Keyboard with Trackpad. 26-Piece PC Repair Tool Kit. Magic Wand - Programmable TV Remote. Super Ear. Black Ops Throat Mic iPhone Headset. Grassy Lawn Charging Station. Stirling Engine Kit. ThinkGeek Bluetooth Retro Handset. Universal Gadget Wrist Charger. Universal Network Cable. Gelaskins iPod Touch Skin, Steampunk. SpyNet Laser Trip Wire.

Tan Le: A headset that reads your brainwaves. Bedphones Are Thin, Light So You Can Sleep. Place these impossibly thin and small Bedphones over your ears and soon you'll be drifting off to sleepytime land. 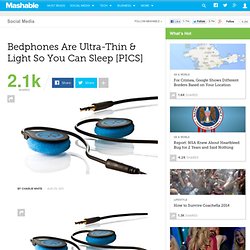 The idea was to create unobtrusive headphones that would be conducive to sleep, and at a quarter-inch thick, you'll probably forget you're wearing them. Their "memory wire" gently clamps the phones to your ears, and the attached cable connects to any music player or mobile device with a standard 3.5mm headphone jack. Crank up your favorite lullaby (or maybe even some white noise), and if you're one who needs music to sleep, these $29.95 Bedphones just might do the trick without bothering the neighbors. Two clever touches: Notice the satin eye mask tucked into the carrying case pictured in the gallery below. And there's a free Bedphones Music Controller app for Android that automatically turns off the music when you fall asleep. Finally, Disposable Thumb Drives!

No matter what I do I just can’t seem to hang onto a thumb drive. 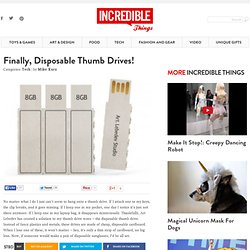 If I attach one to my keys, the clip breaks, and it goes missing. If I keep one in my pocket, one day I notice it’s just not there anymore. If I keep one in my laptop bag, it disappears mysteriously. Thankfully, Art Lebedev has created a solution to my thumb drive woes – the disposable thumb drive. Instead of fancy plastics and metals, these drives are made of cheap, disposable cardboard. Via: blog.allusb.com.