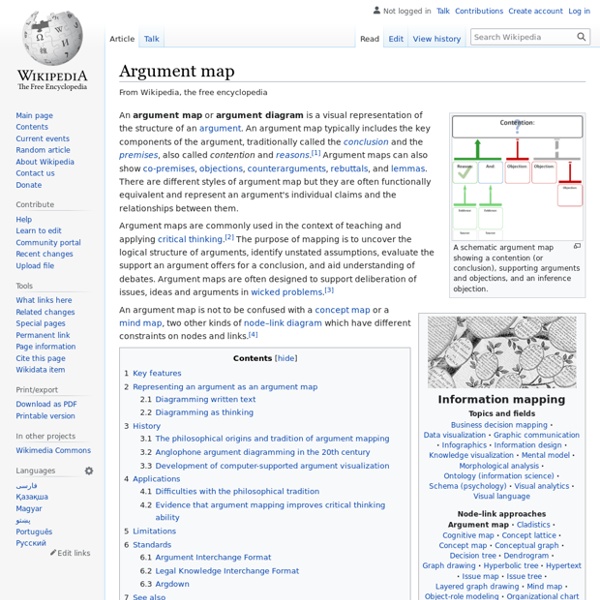 Visual representation of the structure of an argument A schematic argument map showing a contention (or conclusion), supporting arguments and objections, and an inference objection. Argument maps are commonly used in the context of teaching and applying critical thinking.[2] The purpose of mapping is to uncover the logical structure of arguments, identify unstated assumptions, evaluate the support an argument offers for a conclusion, and aid understanding of debates. Argument maps are often designed to support deliberation of issues, ideas and arguments in wicked problems.[3] Key features[edit] A number of different kinds of argument maps have been proposed but the most common, which Chris Reed and Glenn Rowe called the standard diagram,[5] consists of a tree structure with each of the reasons leading to the conclusion. According to Douglas N. There is disagreement on the terminology to be used when describing argument maps,[8] but the standard diagram contains the following structures: Related:  Saved Wiki

Argunet | Open-Source Argument Mapping Scale | GEOG 030: Geographic Perspectives on Sustainability and Human-Environment Systems, 2011 - Iceweasel Printer-friendly version One of the central concepts in geography is scale. In rough terms, scale refers to how big or small something is. That "something" could be an event, a process, or some other phenomenon. In geography, we often focus on spatial scale, which is the spatial extent of something. We sometimes also discuss temporal scale, which is the temporal extent of something. Some examples can help us understand scale. A nice depiction of scale can be found in the 1977 video "Powers of Ten": The video shows the same point in space on a broad range of scales, from the subatomic to the astronomical. It is important to appreciate that phenomena can be considered or observed at multiple scales. Another example important to Geog 30 is deforestation. * Economic integration: Global freight shipping permits Brazilian trees to be sold to European consumers. * Political integration: American environmental policies may limit the types or quantities of trees that can be imported from Brazil.

Araucaria (software) The user interface is composed of a main window (diagramming), a schemes editor and the AraucariaDB online interface. While Araucaria helps identify the structure of an argument, it provides freedom of analysis resources. The scheme editor allows the user to create argumentation schemes, group them together and save them into a scheme set file. The AraucariaDB Online Repository can be browsed to retrieve specific arguments to fit a diagram. Because it is based on XML, a standard widely used by developers, AML content can be accessed through other software that support XML.

Visualization (computer graphics) See also Information graphics Visualization or visualisation is any technique for creating images, diagrams, or animations to communicate a message. Visualization through visual imagery has been an effective way to communicate both abstract and concrete ideas since the dawn of man. Examples from history include cave paintings, Egyptian hieroglyphs, Greek geometry, and Leonardo da Vinci's revolutionary methods of technical drawing for engineering and scientific purposes. Visualization today has ever-expanding applications in science, education, engineering (e.g., product visualization), interactive multimedia, medicine, etc. Charles Minard's information graphic of Napoleon's march Computer graphics has from its beginning been used to study scientific problems. Apart from the distinction between interactive visualizations and animation, the most useful categorization is probably between abstract and model-based scientific visualizations.

A Brief History of Decision Support Systems by D. J. Power Editor, DSSResources.COM version 4.1 or see version 2.8 see version 4.1 in Spanish translated by Maria Ramos Summary Information Systems researchers and technologists have built and investigated computerized Decision Support Systems (DSS) for approximately 40 years. I. Computerized decision support systems became practical with the development of minicomputers, timeshare operating systems and distributed computing. This hypertext document is a starting point in explaining the origins of the various technology threads that are converging to provide integrated support for managers working alone, in teams and in organization hierarchies to manage organizations and make more rational decisions. The study of decision support systems is an applied discipline that uses knowledge and especially theory from other disciplines. The next section describes the origins of the field of decision support systems. II. In 1960, J.C.R. T.P. John D.C. III. IV. IV.1 Model-driven DSS

Artificial intelligence in video games In strategy games like Freeciv, the game AI must deal with large amounts of information In video games, artificial intelligence (AI) is used to generate responsive, adaptive or intelligent behaviors primarily in non-player characters (NPCs) similar to human-like intelligence. Artificial intelligence has been an integral part of video games since their inception in the 1950s.[1] The role of AI in video games has expanded greatly since its introduction. Modern games often implement existing techniques from the field of artificial intelligence such as pathfinding and decision trees to guide the actions of NPCs. Additionally, AI is often used in mechanisms which are not immediately visible to the user, such as data mining and procedural-content generation.[2] Overview[edit] Many industry and corporate voices[who?] However, many[who?] History[edit] Light cycle characters compete to be the last one riding, in GLtron. Views[edit] Usage[edit] In computer simulations of board games[edit] Georgios N.

Mind map Diagram to visually organize information A mind map is a diagram used to visually organize information into a hierarchy, showing relationships among pieces of the whole.[1] It is often created around a single concept, drawn as an image in the center of a blank page, to which associated representations of ideas such as images, words and parts of words are added. Major ideas are connected directly to the central concept, and other ideas branch out from those major ideas. Mind maps can also be drawn by hand, either as "notes" during a lecture, meeting or planning session, for example, or as higher quality pictures when more time is available. Mind maps are considered to be a type of spider diagram.[2] A similar concept in the 1970s was "idea sun bursting".[3] Origins[edit] The semantic network was developed in the late 1950s as a theory to understand human learning and developed further by Allan M. Popularization[edit] Differences from other visualizations[edit] Research[edit] Features[edit]

Press Space or double-click to edit Capture ideas at the speed of thought – using a mind map maker designed to help you focus on your ideas and remove all the distractions while mindmapping. Create unlimited mind maps for free, and store them in the cloud. Your mind maps are available everywhere, instantly, from any device. Brainstorm, create presentations and document outlines with mind maps, and publish your ideas online and to social networks. Get Started Why use MindMup? MindMup is great for individual note-taking, collaborative planning, teamwork and classrooms. 1 Powerful keyboard shortcuts speed up your work 2 Frictionless interface helps you focus 3 Convert maps easily to PDF, PowerPoint, outlines... 4 Publish and share maps online 5 Easily save to Google Drive and manage using Google Apps

Home — Penn State Meteorology and Atmospheric Science - Iceweasel Applications of artificial intelligence Artificial intelligence has been used in a wide range of fields including medical diagnosis, stock trading, robot control, law, remote sensing, scientific discovery and toys. However, many AI applications are not perceived as AI: "A lot of cutting edge AI has filtered into general applications, often without being called AI because once something becomes useful enough and common enough it's not labeled AI anymore," Nick Bostrom reports.[1] "Many thousands of AI applications are deeply embedded in the infrastructure of every industry." In the late 90s and early 21st century, AI technology became widely used as elements of larger systems, but the field is rarely credited for these successes. Computer science[edit] AI researchers have created many tools to solve the most difficult problems in computer science. Many of their inventions have been adopted by mainstream computer science and are no longer considered a part of AI. Finance[edit] Hospitals and medicine[edit] Heavy industry[edit]

Concept map An Electricity Concept Map, an example of a concept map A concept map or conceptual diagram is a diagram that depicts suggested relationships between concepts.[1] It is a graphical tool that designers, engineers, technical writers, and others use to organize and structure knowledge. A concept map typically represents ideas and information as boxes or circles, which it connects with labeled arrows in a downward-branching hierarchical structure. Overview[edit] A concept map is a way of representing relationships between ideas, images, or words in the same way that a sentence diagram represents the grammar of a sentence, a road map represents the locations of highways and towns, and a circuit diagram represents the workings of an electrical appliance. Concept maps were developed to enhance meaningful learning in the sciences. Differences from other visualizations[edit] History[edit] Various attempts have been made to conceptualize the process of creating concept maps. Use[edit] See also[edit]