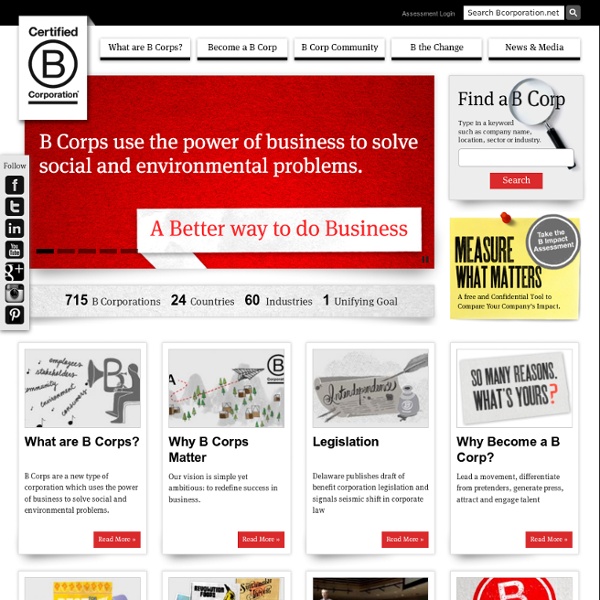 [Re]Build: A Call for Contributors and Participants [Re]Build: A Call for Contributors and Participants Kevin Flanagan 24th April 2015 By edmundberger – Source Shock and austerity. Stock market instability. About WFS The World Future Society is an organization of people dedicated to exploring the future. Since its establishment more than 40 years ago, the Society and THE FUTURIST magazine have endeavored to do one thing and to excel at it and that is to serve as a neutral clearinghouse of ideas on the future. Our mission is to enable thinkers, political personalities, scientists and lay-people to share an informed, serious dialogue on what the future will be like. Kingpins of super: 20 largest super funds - SuperGuide.com.au Note: Each year, the Australian Prudential Regulation Authority releases performance data on the largest 200 super funds in Australia. The latest report was released on 8 January 2014, providing detailed performance data for the 2012/2013 financial year. This article provides some of the highlights of the report.

'a' Magazine Daily Are you one of the more than two-thirds of organizations investing in the wrong employees? New research from the Corporate Executive Board (CEB), revealed that more than two-thirds of companies are misidentifying their high-potential employees, jeopardizing their long-term corporate performance. This failure drives true high-potentials—those who demonstrate the attributes to be successful future leaders—to pursue positions with potentially competitive organizations willing to invest in their development. + Read More Encourage your company to have a family day at least once per year. I have planned to explore in three simultaneous blogs, a trilogy of blogs, the three horizon model more extensively. It is a most valuable one to build into your thinking about strategy and innovation. This is the final blog of the trilogy on the Three Horizon Framework and offers my thinking on an emerging framing to help in navigating through this. The need is to define your different horizons. Firstly time is relative; relative to your industry, your situation, your changing circumstances, your customers.

GF2045 The second international Global Future 2045 congress will take place on 15-16 June 2013 at the Lincoln Center in New York, and will be focused on discussion of a new evolutionary strategy for humanity aimed at overcoming the 21st century’s civilization challenges. The strategy is based on carrying out two revolutions: spiritual and sci-tech. We believe this is the only way to overcome existing crises. At the congress, a vision will be presented for the spiritual transformation of humanity, and new technologies will be demonstrated which are likely to form the basis of the sci-tech revolution. The congress will also showcase our Avatar science mega-project, aimed at accelerating the creation of technologies enabling a gradual transition from our biological bodies to an increasingly advanced artificial carrier of the human self. The first GF2045 congress took place in Moscow in February 2012.

I seem to be reading a lot about the concept of value creation recently. It seems to have the same ‘heady vaulted position’ as innovation in that we all talk far more about the ‘promise’ of it. So what is behind value creation? What drives it? Kyle Westaway An abridged version of this article ran in The Guardian Sustainable Business section. Click here for that version. A quiet corporate revolution for good is sweeping across America. The Benefit Corporation, a new class of corporation for sustainable business, is being passed into law in states across the US. The Benefit Corporation is being adopted by state legislatures at light speed, with twenty states passing legislation in just over three years. Metromile Pitches Pay-as-You-Drive Auto Insurance Greg Muender, a 27-year-old tech entrepreneur in San Diego, was constantly shopping for the best deal on car insurance. “I probably switched carriers five times or more” over five years, he says. “Insurance was a commodity to me.” Working from home, Muender sometimes puts as few as 50 miles a month on his Infiniti G37. (His wife, Sara, sometimes drives her Mazda CX-5 more.)

Where do you set about to intervene and begin to change the organizations ability to innovate? There are seemingly so many intervention points it can get bewildering. The innovation environment can be made-up of how well you collaborate and network, the level of group and individual interactions, the presence and commitment of leadership towards innovation, as well as the organizational set-up and structures. You can explore the make-up of the innovation environment in so many ways. The Rise of Social Entrepreneurship in B-Schools in Three Charts - Katie Smith Milway and Christine Driscoll Goulay by Katie Smith Milway and Christine Driscoll Goulay | 11:00 AM February 28, 2013 Twenty years ago, on two different business school campuses a continent away, the seeds of social entrepreneurship were planted. At INSEAD, two students Philippe Dongier and Katie (co-author of this post) sent a school-wide email asking if anyone was interested in cultivating coursework and careers related to nonprofits. Overnight, 126 students, staff, and faculty responded — a number equal to 50% of the newly arrived class. With a student-faculty steering committee and 50,000 Euros of seed funding from the school’s administration, they founded INDEVOR, INSEAD’s social enterprise club. Across the pond, John Whitehead, the former managing partner of Goldman Sachs and the board chair for several nonprofits, approached the dean of Harvard Business School with a similar idea.