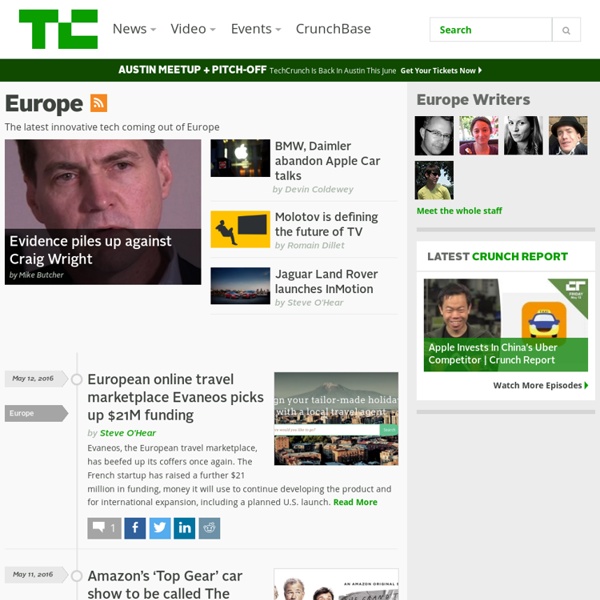 for iPad is here! Two months ago, we sat glued to our browsers as details of the iPad started streaming out of Apple’s launch event. It didn’t take us very long to formulate our official strategy for the new device: we were going to support the hell out of it, and we had 60 days to do it. Today is iPad launch day and as long lines start to form outside of Apple stores and UPS-Santa makes his rounds to sleepless geek households, we’re happy to say that Evernote for the iPad is live in the Apple AppStore!

Spanning the width and breadth of the Geek dream Geek Media Round-Up: July 31, 2013 Jul 31 2013 0 Comments 271 views Comics Read the rest of this entry » » » Geek Media Round-Up: July 24, 2013 Jul 24 2013 0 Comments 165 views Suivi de production de l'éolien en France There are some things best left for the second or third or even the fifteenth hookup to really discuss. If you’ve got some wild and crazy kinks, that’s one thing; in other cases, unless you’re in this hookup for a specific thing, there are kinks that should be tread upon carefully, and better left to the experts. Unless you are 5000% sure that your current hookup will not run screaming from your hotel room when you bring up your certain turn-on, then you need to leave these kinks for another time, once you are sure that your new lady is really into the same things that you are, or at least comfortable in trying them out.

European Court of Justice rejects web piracy filter 24 November 2011Last updated at 12:48 Blocking general access to peer-to-peer sites was ruled to be in breach of EU laws The European Court of Justice has ruled that content owners cannot ask ISPs to filter out illegal content. The ruling could have implications for the creative industries as they attempt to crack down on piracy. The court said that while content providers can ask ISPs to block specific sites, wider filtering was in breach of the E-Commerce Directive.

iA » Designing for iPad: Reality Check by Oliver Reichenstein Over the last two months we have been working on several iPad projects: two news applications, a social network, and a word processor. We worked on iPad projects without ever having touched an iPad. One client asked us to “start working on that tablet thing” even before we knew whether the iPad was real. The question Are we designing desktop programs, web sites, or something entirely new?

Les nouvelles — NortekMED Nortek Northern European User Seminar 2014 NortekBV, NortekUK and Terra4 are pleased to invite you to attend the European user symposium. This symposium offers two days of user presentations, hands on demonstrations, technical discussions, our newest developments, and networking opportunities, all focused around (online) monitoring and measurement campaigns. The third day's program will be an informal event viewing the Round Texel Race.

EU Court of Justice rules it illegal to block “illegal” file downloading #Scarlet #SABAM The EU Court of Justice has ruled that it is illegal to block copyright infringing file downloading on the basis of the freedom to conduct business, the right to protection of personal data and the freedom to receive or impart information. This concludes a long running (2007) Scarlet-SABAM court case in which Scarlet, a Belgian ISP was ordered by a national court to implement technical measures to block all P2P traffic that infringes rights held by the Belgian Society of Authors, Composers and Publishers (SABAM). The ruling also supplements a previous legal opinion on the subject by a EU High Court Judge that was not in itself binding in law. This is a major milestone in the online Intellectual Property/Copyright saga and must surely bring into question the recent Newsbin2 judgement in which BT was required by a court to block access to the website that promotes the unlawful distribution of copyrighted material.

What Startups Should Do Before They Get Into The VC’s Office This is a guest post by Eze Vidra, Head of Campus London, Google’s dedicated startup space in East London housing accelerators and co-working spaces. He tweets at @ediggs and blogs at VCCafe.com. An experienced VC would have heard thousands of pitches in his day. The good ones would tell you that they have developed a “pattern recognition”. After a while, they are able to determine (at least in their own minds) what startups would succeed or fail in a matter of minutes. There’s obviously lots going on in a pitch – verbal and non-verbal communication, chemistry etc. 30 Useful iPad Apps for Business & Presentation Apple sold more than 1 million copies of iPads in the first 3 months. This gadget is definitely more than just a larger version of iPhone or iPod touch. With 4x the screen of an iPhone, the iPad’s display is ideal for reading and for presentations. In today’s post, we’d like to highlight some really useful iPad applications that might replace the things you do daily with your laptop or netbook.

How To Publish Your Favourite Bookmarks To Twitter The more I talk to people about how they use Twitter the more I find that nobody really uses Twitter in the same way. Today Matthew Lang (follow him at @matthewlang) shares with us the way that he shares bookmarks with his Twitter followers. You’ve found a great article on the web, you bookmark it for yourself but you want to share it quickly with your followers on Twitter? Copying the url to a url shortening service and posting it on Twitter seems like too many steps. CSS for Non-IE browsers Information Here I hope to demonstrate some of the CSS features that are possible in Mozilla, Netscape, Opera, Safari etc. in other words non-IE browsers. This will be based on the fact that these browsers allow the :hover pseudo class to be used on any element, which gives more scope for dynamic content such as drop-down, pull-out and cascading menus. 19th May 2007