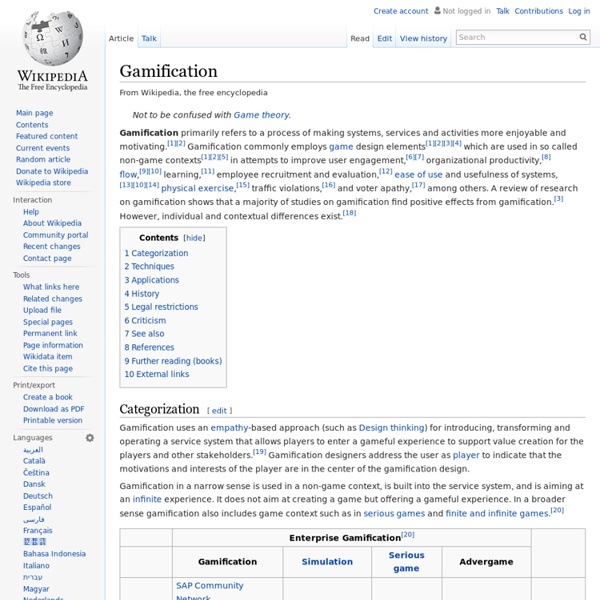 Categorization[edit] Gamification in a narrow sense is used in a non-game context, is built into the service system, and is aiming at an infinite experience. It does not aim at creating a game but offering a gameful experience. In a broader sense gamification also includes game context such as in serious games and finite and infinite games.[20] Another categorization compares gamification with other gameful approaches by looking at characteristics such as spontaneity, rules, or goals:[20] Techniques[edit] Gamification techniques strive to leverage people's natural desires for socializing, learning, mastery, competition, achievement, status, self-expression, altruism, or closure. Another approach to gamification is to make existing tasks feel more like games.[27] Some techniques used in this approach include adding meaningful choice, onboarding with a tutorial, increasing challenge,[28] and adding narrative.[27] Applications[edit] Gamification has been widely applied in marketing.

Escape Room Themes Most escape rooms will have a theme or backstory to go with the mystery. It isn't necessary, and some pure puzzle solvers even prefer it. However most people prefer, and most escape rooms provide a basic theme. The theme is created by the decorations, music and lighting; plus the clues, puzzles and riddles themselves follow the theme of the room. As websites become games, understand the trend with the Gamification Encyclopedia 11 January '11, 03:20pm Follow One of the biggest trends we’ve seen on the Web in the past year has been the growing “Gamification” of websites and online services.

Five Essential Steps for Gamifying Education Whether you are considering gamifying a single lesson, an entire curriculum, or a whole school, it can be a daunting and confusing process. Those who try their hand at integrating game mechanics into the classroom setting may meet with less than stellar results and give up after just one attempt. But effective gamification is a complex undertaking that requires both the motivation to work harder at making learning engaging for students and the dedication to experience, accept, and learn from failures when doing so. I have spent the past year gamifying my college-level composition courses and, while I am still by no means an expert at gamifying education, I have, in the process, learned a few things from my own failures.

Education Levels Up! – A noObs guide to Gamifying your Classroom A new way to manage classroom instruction is slowly creeping into the world of education: “Gamification“. Gamifying simply means turning the class content and the way students learn into a game with a rewards system, quests, experience levels, and healthy competition. Gamifying isn’t anything new; businesses and social websites have been using “gaming” to attract and keep users coming back for years now.

Will Wright on Gamifying the World: From SimCity to the Future Will Wright Shares His Experience on Gamifying Systems and Simulations One of the most phenomenal experiences of GSummit SF 2013 happened with Will Wright’s keynote talk. As the creator of SimCity and countless other games and simulations, Wright’s talk goes deeply into games’ and their effect on us as humans in society and what that means for gamification in the grand scheme of things.

S2T4W3: Gamification, Funware, Puzzle Building, Professor Teaches 1. Exploring Gamification Trends Some games are based on real life (like Football Manager), but what if we made life more like games. This trend has been growing over recent months. Playing games for employment: Defining the mission Young people dig into the problems they face when looking for jobs. Photo: Emerson College In one of our previous blog posts, we showed why we want to tackle the problem of youth unemployment in Moldova by playing games. We want to share some of our first steps of defining the game – together with our partners from Emerson College and the National Youth Council of Moldova.

Gen Y vs. Gen X: Who Causes More IT Headaches? CIO CIO — You've heard the Gen Y stereotypes before: They're lazy workers, exude entitlement and have been reared on social technologies that they bring into the workplace, whether IT departments like it or not. A new Forrester Research (FORR) report sheds light on the latter issue, finding that Gen Y workers actually are not much different than Gen Xers or in some cases, even Baby Boomers, when it comes to their views on technology. Businesses should consider and rely more on this Gen Y group of employees when implementing policies and technologies, Forrester advises. Reflections and Concerns about Gamification (Part I) (Cross-posted from Aaron’s Blog) I’ve been a member of Gamespot – a website dedicated to news and discussion on videogames – since 2003. My rank on it is Super Bagman (Level 23), which I gather isn’t particularly high, since the site suggests you can go up to at least Level 71. I also have a list of achievements for having done mundane things, such as registering for the site, voting for the game of the year, and being a “New Game Ninja,” whatever that means. The details about levelling up in rank isn’t displayed prominently, so I had to do some digging around to find it. Here’s a passage that gives you some idea of what levelling up means:

Gamification increases engagement and retention levels Gamification is on the rise and has become one of business’ recent buzzwords. But what are we talking about? Defined as the use of game design mechanisms in non-gaming contexts, the term gamification was first introduced in 2002 by computer programmer Nick Pelling. The concept, which borrows elements from game thinking, has been recently used to address challenges in different fields, such as recruitment, learning, employee engagement, and retention. Although the idea behind gamification has been around for a while, it is only in the last four years that attention has grown exponentially – up to the point that some critics report an abuse of the term.

Gen Y will change the rules » Pulse of Week » society » Kyivweekly.com.ua 05.03.2012 | By Hryhoriy Nikonov “This is such a sophisticated and confident generation that we have not seen for years. It will radically change the labor culture in companies,” said Anders Parment of the Stockholm University School of Business and author of the book Employees of the Future that received recognition in Europe in an interview for the German magazine Spiegel The book focuses on the so-called Generation Y – people born after 1980 that entered the new millennium at a young age. Some researchers disappointed by the seeming non-identity and confusion of the previous Generation X are hurrying to call Generation Y, also known as the Millennial Generation (or Millennials), Generation Next, Net Generation, Echo Boomers, the “golden generation”.

Social Competition = Gamification + Engagement According to Merriam Webster , competition is defined as 1 : the act or process of competing : rivalry : as a : the effort of two or more parties acting independently to secure the business of a third party by offering the most favorable terms b : active demand by two or more organisms or kinds of organisms for some environmental resource in short supply 2 : a contest between rivals; also : one’s competitors <faced tough competition >