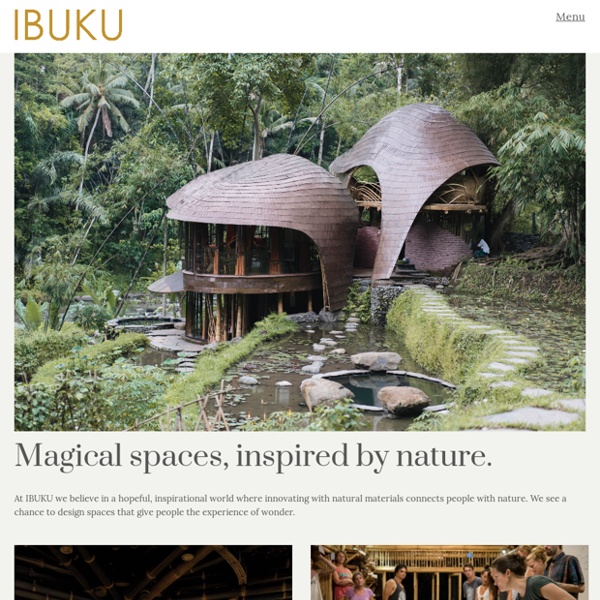 Green Village Set along the terraced slopes of the Ayung River in Sibang, Bali, Green Village is a master-planned community of eighteen dramatically unique homes, each custom designed, rigorously engineered, and hand-constructed to embody the inherent strengths and versatility of bamboo. Within walking distance of the Green School, the architectural innovations and structural vocabulary are an extension of the sustainable principles and artisan craftsmanship of the world famous campus. According to Elora Hardy, creative director of the Ibuku design team, “Green Village has redefined the potential of sustainable materials. It is a place where where people connect with nature. We build light on the land. With very few resources or attention a bamboo shoot can become a structural column within three years, and that house can stand strong for a lifetime.

CFPR : Bureau Service The Centre for Fine Print Research offer a bureau service in, Laser Cutting and 3D Printing. Follow the links below to find out more: Laser Cutting Bureau Service Penda Continues to Push Bamboo with Rising Canes at Beijing Design Week From the architect. Following up a year of development, Penda has unveiled their installation for Beijing Design Week (BJDW) 2015 – Rising Canes, a structural system made entirely of bamboo and ropes. Meant to be a speculation system for larger developments, the installation is fully modular, ecological and easy to expand in every direction. Bamboo was chosen as the main construction material for its long traditional roots in China and fantastic structural capability, as well as part of a desire to fight its current obscurity as a construction material. From the architect: For our Pavilion for the BJDW, no nails or screws were used and all materials are 100% recyclable.

Aquaponic Systems for Home Food Production Nelson and Pade, Inc.’s Home Food Production systems use the same science-based design, component ratios and water flow dynamics as our commercial systems. They are just smaller. Our Home Food Production systems are a great way to learn the concepts and daily operation of aquaponics, while growing fresh fish and vegetables for your family. The individual filter tanks demonstrate all of the scientific principles of aquaponics, make operation easier and increase productivity. Bamboo Shelter by Esan Rahmani + Mukul Damle Australian designer Esan Rahmani in collaboration with Mukul Damle have designed “Bamboo Pavillion”, a synthesis of sustainable ideas for a communal shelter for the disadvantaged around the Indian Ocean Rim. Focusing on readily available materials in the region, the whole pavillion is designed to be made from bamboo. Bamboo’s extraordinary physical characteristics make is suitable for all types of structures including roofing, water pipes, drainage, flooring.

Competition: five Arckit 180 modelling sets to be won Dezeen has teamed up with Arckit to give away five modelling kits from its new series. Arckit was hailed as "posh Lego" when it was first launched by architect Damien Murtagh over two years ago, as it is made up modular components that connect without glue. It aimed to provide architects with an alternative to the traditional cut and glue architectural working models, but the collection has since expanded to include kits suitable for a wider audience. "Arckit has been a success not just in the architecture sector but also within education," said Murtagh. "We have launched the new kits to meet this demand and build on the original range, so users can now use Arckit to design a wider range of models than ever before." "It's an extremely innovative and practical tool for students and professionals, but also amazing fun for anyone who is creative and enjoys design and modelmaking," he continued.

The Pyramid Temple Communities CommentNovember 17th, 2013 15:11 During the 400,000 year Galactic period, twelve Pyramid Temple Communities were spaced around the planet in the warm balmy climates, each initially colonized with about a hundred thousand male and female bodies. The bodies were cloned by the Galactic Elohim in body-growing novas on board their great mind-over-matter causation spaceships. Bamboo Structure Project / Pouya Khazaeli Parsa Design: Pouya Khazaeli Parsa Location: Ramsar, Mazandaran, Iran Collaborators: Kaveh Akef, Milad Haghnejad Construction: Javad Abbasi Client: Manouchehr Mirdamad Total Cost: €850 Materials: Gas pip, Bamboo, Rice stream Maximum diameter: 8 sqm Minimum diameter: 6 sqm Maximum height: 3,30 sqm Project area: 40 sqm Project year: 2009 Photographs: Pouya Khazaeli Parsa This project is dedicated to a student of mine who didn’t know how to create a dome! The student in question was tasked with producing a model of the Sultaniya dome. He set about cutting 3mm strips of foam and bending each strip into a semi-circle, rotating and joining them by their tips.