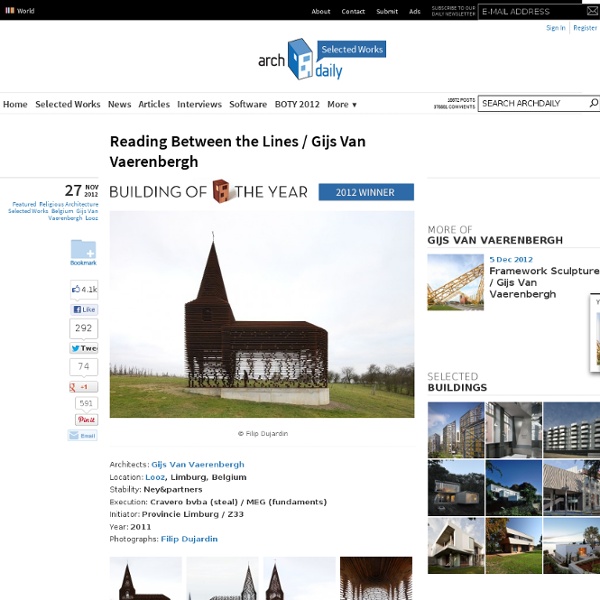 Architects: Gijs Van Vaerenbergh Location: Looz, Limburg, Belgium Stability: Ney&Partners Execution: Cravero bvba (steal) / MEG (fundaments) Initiator: Provincie Limburg / Z33 Year: 2011 Photographs: Filip Dujardin ‘Reading between the lines’ is a project by the duo Gijs Van Vaerenbergh, a collaboration between young Belgian architects Pieterjan Gijs (Leuven, 1983) and Arnout Van Vaerenbergh (Leuven, 1983). Since 2007, they have been realizing projects in public space together that start from their architectural background, but have an artistic intention. Their projects do not always originate out of the initiative of a classical client, for example, and carry a large degree of autonomy. Their primary concerns are experiment, reflection, a physical involvement with the end result and the input of the viewer. ‘Reading between the lines’ is part of ‘pit’, an artistic trajectory with works by some ten artists in the region of Borgloon-Heers (in the Flemish province of Limburg).

NEXUS-WORLD-HOUSING Confronted with the possibility of building in Japan, a European architect faces a dilemma; should the project be 'as western as possible'? Is it just another export like Van Gogh, a Mercedes, or a Vuitton bag? Or should it reflect the fact that it exists in Japan? In Fukuoka, the character of the site reinforces this dilemma: the context is more organized, less 'chaotic', than the typical Japanese city. For this operation, Arata Isozaki invited one Japanese architect (Osamu Ishiyama) and five non-Japanese architects (Oscar Tusquèts, Christian de Portzamparc, Marc Mack, Steven Holl) and OMA to define a superblock with freestanding perimeter buildings for a client who wanted to introduce a 'new urban lifestyle' in Japan.

Screen House / Alain Carle Architecte Architects: Alain Carle Architecte Location: Wentworth-Nord, QC J0T, Canada Area: 5405.0 ft2 Year: 2013 Photographs: Adrien Williams From the architect. The contextual constraint of this project, located on a lakeshore, enabled us to pursue the exploration of the possibilities of work geared to perceptual considerations. Narrow in depth, the site presented several setback constraints (next to a lake, stream, street, etc.). The buildable area was therefore somewhat narrow and irregular, which nonetheless offered the opportunity to design a project outside the typical precepts of “stylish” residences. The difficulty with respect to layout also facilitated discussions with the owners during the presentation of the concept, because there could be no question here of an idealized form.

A Wall That Plays Music When It Rains According to Atlas Obscura, “when the rain starts to fall, this colorful drain and gutter system attached to the outside of a building in the Neustadt Kunsthofpassage turn into charming musical instruments. The Funnel Wall is one of the strangest and most enjoyable attractions in Dresden’s student district in the new town. ” (Image credits: ingeniumetars)

Les Elfes / Alain Carle Architecte Architects: Alain Carle Architecte Location: Morin-Heights, QC, Canada Area: 5165.0 ft2 Year: 2011 Photographs: Adrien Williams From the architect. Located on a mountainside, the site of the “Les Elfes” residence posed a singular problem of the horizon as perceptual referent. Go House / Agustin Landa Ruiloba Architects: Agustin Landa Ruiloba Location: Monterrey, Nuevo Leon, Mexico Project Area: 270.0 m2 Project Year: 2014 Photographs: Onnis Luque Collaborators: Sofia Arevalo, Abelardo Gonzalez, Cecille Tamayo, Juan Carlos De La Garza, Isabel Landa From the architect. GO House is located west of the city of Monterrey, in the upper part of a subdivision, a site facing north. The commission was to make a house that would take maximum advantage of site conditions, mainly wind and views, with a limited budget. The design consists of a linear solid volume with three bedrooms that stretches from north to south at the east end of the site, and cantilevers over the social areas of the house.

A Concrete and Glass Home Frames Epic Views of San Diego ​The End of the Partitioned Office: Informal Furniture for the Collaborative Workplace When was the last time you punched in at a cubicle farm? Can’t recall? That’s because the informal collaborative workplace, not long ago associated solely with boutique ad agencies, has swiftly replaced the partitioned office. Yet, as this interior theme becomes commonplace for enterprises ranging from social entrepreneurships to federal agencies, its drawbacks, such as lack of acoustical privacy and visual cacophony, have also come into sharper relief. Nestle, Image via Stylex Nestle, conceived by rising-star product designer, Brad Ascalon, and manufactured by Stylex, a New Jersey–based manufacturer, is aimed at addressing this new visual disorder.

DPS Kindergarten School - Khosla Associates - architecture + interiorsKhosla Associates – architecture + interiors DPS Kindergarten School The brief called for us to design a franchise for one of the largest north Indian school chains, Delhi Public School. Since the high volume model was to be potentially replicated across several schools in South India, we were asked to create a simple and cost effective language that could be adapted easily to different site conditions and slightly varying programs.

Dovecote Studio / Haworth Tompkins Check out this project by London based firm, Haworth Tompkins. The firm renovated a dilapidated old building situated on the Dovecote Studio campus – an internationally renowned music campus at Snape Maltings, founded by Benjamin Britten which is currently undergoing an expansion. Nestleed within the shell of an abandoned building, the firm responded to the existing conditions with a touch of sensitivity, uniting the old structure with the new aesthetic. More about the project, including more images after the break. Pisek City Forest Administration / e-MRAK Architects: e-MRAK Location: Flekačky 2623, Pisek, Czech Republic Architect In Charge: Martin Rajniš, Martin Kloda, David Kubík Area: 598.0 sqm Year: 2010 Photographs: Radka Ciglerova From the architect. The administration of the forest of the town of Pisek held a competition for a new operational building on a beautiful site at the edge of the forest; sloping to the south, it has a splendid view.