A journey towards excellence for Christ. Jesus is the Coming King! Triablogue. Now The End Begins « Nevada: A Nevada cattle rancher appears to have won his week-long battle with the federal government over a controversial cattle roundup that had led to the arrest of several protesters. 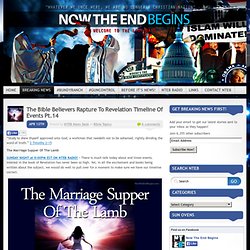 Wretched with Todd Friel. Devotional Thoughts « Justification by Grace. Verse of the Day Daniel 12:9 And he said, Go thy way, Daniel: for the words are closed up and sealed till the time of the end. (10) Many shall be purified, and made white, and tried; but the wicked shall do wickedly: and none of the wicked shall understand; but the wise shall understand. Ingridschlueter.wordpress.com. White Horse Inn Blog - Know what you believe and why you believe it. Especially as Americans, we are often given to over-simplification. 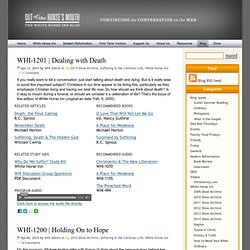 We like bumper stickers and sound bites. Problem is, sound bites get forwarded, linked, tagged, “liked,” and tweeted. And then the “aha!” Moment passes as quickly as it struck. Even confessional folks have slogans. My Word Like Fire. Bible Prophecy Blog. Are You In RobBellion? Posted by Cathy Mathews RobBellion noun \rahb-ˈbel-yən\ - The state or condition of denying the revealed Word of God so that you can redefine God, Jesus, salvation, heaven, hell and the Gospel to mean whatever you want them to mean. photo credit: Christian Selvaratnam via photopincc Additional Resources What Is The Emerging Church Movement and Why Is It Dangerous? 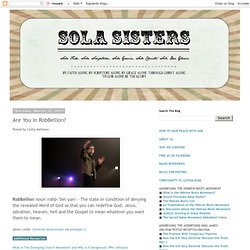 "Cindy Jacobs: Pray Against WWIII" NAR Prophetess's Inflammatory Comments on the Egypt Crisis "Also, in looking back at the prophetic word for 2011 issued by the Apostolic Council of Prophetic Elders..., I read the warning we issued which said that satan would try and start another third world war. 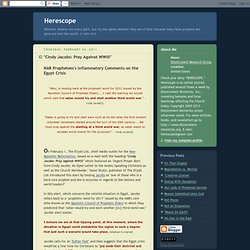 " -- Cindy Jacobs[1] "Satan is going to try and start wars such as he did when the first student volunteer movement started around the turn of the 20th century.... We must pray against the starting of a third world war, as satan wants to escalate world events for His purposes. " -- Cindy Jacobs[2] 5 Pt. Salt. From the Lighthouse BlogRick Warren Speaks Out Against Those Warning the Church of Meditation. By John LanaganMy Word Like Fire Ministries No wonder, for even Satan disguises himself as an angel of light. (2 Corinthians 11:14) Perhaps stung by criticism about his Daniel Plan alliance with three well known New Age doctors, Rick Warren simultaneously addressed and sidestepped the meditation issue during a recent sermon.1 Warren never acknowledged his own promotion of teachers of anti-biblical meditative practices such as contemplative prayer, never addressed the Daniel Plan controversy, but seemed to accuse instead the Christians who sounded the alarm about Eastern/New Age meditation advocates Dr. 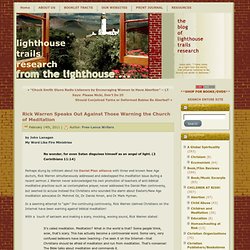 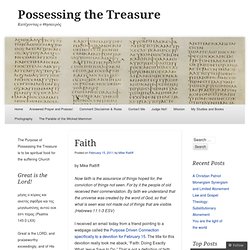 For by it the people of old received their commendation. By faith we understand that the universe was created by the word of God, so that what is seen was not made out of things that are visible. (Hebrews 11:1-3 ESV) I received an email today from a friend pointing to a webpage called the Purpose Driven Connection specifically to a devotion for February 15. Carefully read the passage I placed at the top of this post (Hebrews 11:1-3). True saving faith always produces obedience, but this obedience is evidence of our salvation. In our salvation, to “believe in Jesus” means three things. Soli Deo Gloria! Taken Captive « Possessing the Treasure. By Mike Ratliff See to it that no one takes you captive by philosophy and empty deceit, according to human tradition, according to the elemental spirits of the world, and not according to Christ. 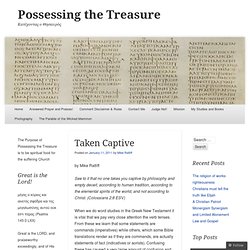 (Colossians 2:8 ESV) When we do word studies in the Greek New Testament it is vital that we pay very close attention the verb tenses. From these we learn that some statements are commands (imperatives) while others, which some Bible translations render as if they are commands, are actually statements of fact (indicatives or aorists). Confusing these has caused a very large amount of confusion and bad doctrine to pollute the church. I say this in order that no one may delude you with plausible arguments. This I say, that no one might delude you with persuasive words. Verse 8 is in bold in each example above. Notice also that the solution for us to keep us from being taken captive by these deceivers is to be taken captive by Christ.