'The Love of Most Will Grow Cold,' Jesus Prophesied. Summary: Jesus ominously warned that in the latter days the love of most believers would grow cold!

But there is a simple solution that will keep your love for Him strong and growing. Young Adult & Singles Ministry In Dallas. No one ever plans to ruin their life. 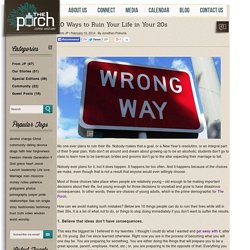 Nobody makes that a goal, or a New Year’s resolution, or an integral part of their 5-year plan. Kids don’t sit around and dream about growing up to be an alcoholic; students don’t go to class to learn how to be bankrupt; brides and grooms don’t go to the altar expecting their marriage to fail. Nobody ever plans for it, but it does happen. It happens far too often. And it happens because of the choices we make, even though that is not a result that anyone would ever willingly choose. Silencing the Slanderous Accuser of the Brethren. I’ve faced my fair share of slander from the accuser of the brethren. 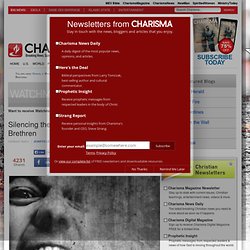 Sometimes it comes through religious spirits that type 50 words per minute and rip off an email without considering the spirit in which they're written. Other times it comes through atheists or radical gay activists who mock and condemn me for voicing God’s Word. Still other times it can come from who you let get close to you that have believed the enemy's lie. Of course, it’s no coincidence that the slander always makes its way back to your ears. The accuser of the brethren knows that folks—yes, even Christian folks—can’t resist the temptation to gossip, despite the fact that the Bible says a perverse man sows strife (Prov. 16:28); despite the fact that death and life are in the power of the tongue (Prov. 18:21); and despite the fact that God warns us not to circulate a false report (Ex. 23:1). How to Create a Lifelong Brotherhood. Redeeming LGBTQ in Christ. Not a sparrow falls…or a swallow. I’ve been sitting on this blog post for the last week trying to decide what I could say about the story, but instead I’m just going to tell the story and you can make any conclusions you like.

On Saturday morning of our April 2013 Bootcamp JB and I were running a little late to breakfast and we were the last people in the cabin. As we’re just about out the door I see a bird hit the big A-Frame window and fall the 20-30 feet to the deck. We walk out and see this poor creature is in bad shape. Its breathing ragged its eyes are rapidly dimming and something sharp and white is protruding from the side of his face.

Our best guess is that it’s bone from his head – a compound fracture of the little guy’s skull. Before… 3 Common Traits of Youth Who Don't Leave the Church by Jon Nielson. What is it that sets apart the kids who stay in the church? 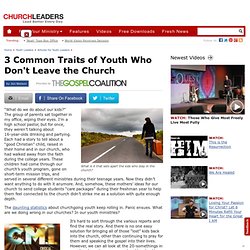 “What do we do about our kids?” The group of parents sat together in my office, wiping their eyes. I’m a high school pastor, but for once, they weren’t talking about 16-year-olds drinking and partying. Each had a story to tell about a “good Christian” child, raised in their home and in our church, who had walked away from the faith during the college years. These children had come through our church’s youth program, gone on short-term mission trips, and served in several different ministries during their teenage years. Spiritual Gifts Tests. Adult Test The adult spiritual gifts test is geared towards those with a good understanding of themselves and where they are in their walk with Jesus. 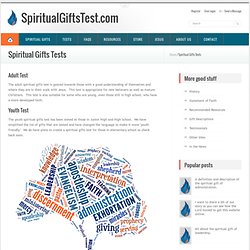 This test is appropriate for new believers as well as mature Christians. What People Are Really Thinking When They Invite you to Church. In the new era of "The Pope Francis Effect", and people of all walks coming out for the release of Pastor Saeed Abedini, a lot of previously shy Christians are feeling more confident stepping up and out, and inviting you to church. 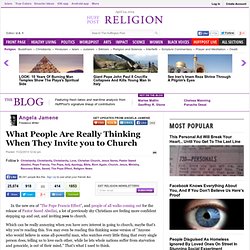 Which can be really annoying when you have zero interest in going to church, maybe that's why you're reading this. You may even be reading this thinking some version of "Anyone who would believe in some all-powerful man, who watches every little thing that every single person does, telling us to love each other, while he lets whole nations suffer from starvation and genocide, is out of their mind. " Fox News' Highly Reluctant Jesus Follower. Just seven years ago, if someone had told me that I'd be writing for Christianity Today magazine about how I came to believe in God, I would have laughed out loud. 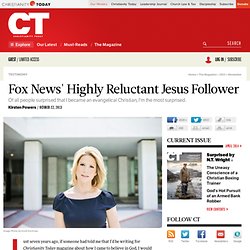 Impossible Possible. Recently, I was picking up the neighborhood boys to drive them to school along with our kids as is part of our Thursday morning liturgy. 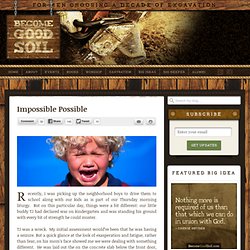 But on this particular day, things were a bit different: our little buddy TJ had declared war on kindergarten and was standing his ground with every bit of strength he could muster. Tears of the Saints.