The Truth About Circumcision Within Christianity. By Daisy May Source: Yahoo Voices! 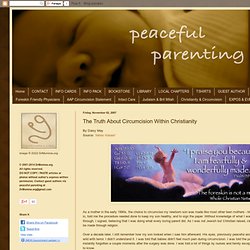 As a mother in the early 1990s, the choice to circumcise my newborn son was made like most other teen mothers - blindly. The hospital nurse came in, told me the procedure needed done to keep my son healthy, and to sign the paper. Without knowledge of what I was agreeing to put my new baby through, I signed, believing that I was doing what every loving parent did. As I was not Jewish but Christian raised, circumcision was not a choice to be made through religion. Over a decade later, I still remember how my son looked when I saw him afterward. Lives Changed: A Willingness to Speak Up. By Christine Bauduin our newest whole son in his Daddy's arms This is a glimpse into the story of how one person changed my child’s life and our family’s future. 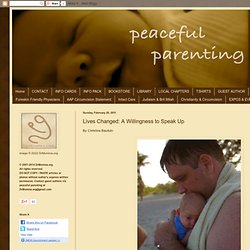 I first met Enith Hernandez, from As Nature Intended, at a doula class we were both attending. Our instructor, Adriana Algieri, was gently guiding us through lessons in how to care for new mommies and teaching us ways to remain neutral in these new mothers' decisions of whether or not to keep their newborn babies intact after birth. It was a hot topic for all the doulas in the class. As a result of all this new information that I was rather hoping to discredit, I was forced to go home and research my own faith. I started to realize that Americans are quite uncultured and clueless when it comes to their underlying reasons to circumcise. At the time I met Enith, I already had five children - three of whom are boys. Catholics Against Circumcision - Respecting Bodily Integrity. The Terror of the Female Circumcision in Christianity.

Greek Persecution. Alexander’s vast empire did not survive his death in 323 BCE, but fragmented into three large chunks centered in Greece, Egypt, and Syria and controlled by his former generals. 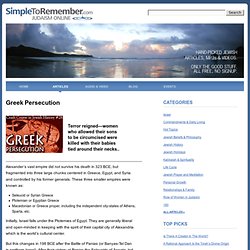 These three smaller empires were known as: Seleucid or Syrian GreecePtolemian or Egyptian GreeceMacedonian or Greece proper, including the independent city-states of Athens, Sparta, etc. Initially, Israel falls under the Ptolemies of Egypt. They are generally liberal and open-minded in keeping with the spirit of their capital city of Alexandria which is the world’s cultural center. But this changes in 198 BCE after the Battle of Panias (or Banyas-Tel Dan in northern Israel). The picture is volatile, however.

He decides that the weak link in his defenses is Israel. Some years before, when the Greeks who had conquered the entire known world first met the Jews, they were astonished. The Jews were just so different from anyone else they had ever encountered. Do Greeks believe in circumcision. Wars between the Jews and Romans. Not everybody agreed to Aqiba's view that Simon was the Messiah. 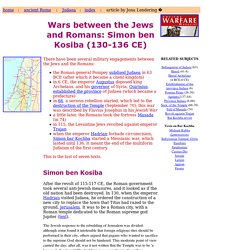 The Jewish Christians refused to accept this claim; the Christian author Justin Martyr tells that Simon commanded Christians 'to be lead away to terrible punishment,' unless they denied Jesus of Nazareth was the Messiah and cursed the man from Nazareth (First Apology 31.6). Now that things were going wrong, governor Tineius Rufus responded harsh. After receiving reinforcements, he moved out against the Jews, treating their madness without mercy. He destroyed in heaps thousands of men, women and children, and under the law of war, enslaved their land. From the account of the Greek historian Cassius Dio (Roman history 69.12.1-14.3) we can deduce that the ensuing war effort of the Jews was extensive, widely supported and fanatical. However this may be, it is certain that Simon and his men were able to control the countryside.

History of Circumcision. This index page links to material relating to the origin and history of male circumcision. 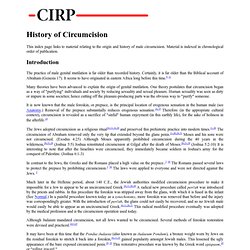 Material is indexed in chronological order of publication. The practice of male genital mutilation is far older than recorded history. Certainly, it is far older than the Biblical account of Abraham (Genesis 17). It seems to have originated in eastern Africa long before this time.8 21 Many theories have been advanced to explain the origin of genital mutilation. It is now known that the male foreskin, or prepuce, is the principal location of erogenous sensation in the human male (see Anatomy.) The Jews adopted circumcision as a religious ritual10,13,16,20 and preserved this prehistoric practice into modern times.11,20 The circumcision of Abraham removed only the very tip that extended beyond the glans penis.11,20,26,31 Moses and his sons were not circumcised.

Although Judaism mandated circumcision, not all Jews wanted to be circumcised. Recent History John R. Highlights. Christianity & Circumcision Resources. One of the most monumental decisions you will make on your son's behalf is whether he will remain intact and whole as he was created, or be circumcised after birth. 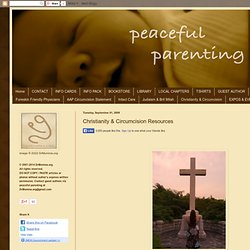 There is much more in the New Testament on circumcision (and the lack of it by early followers of Jesus) than Christians often believe there to be. When making the decision for our son, my husband and I investigated this topic heavily - as both our faith and our new role as a protective mother and father are very important to us.