Bible Crossword Puzzles. "CHURCH": From God or From Man? Language is made up of words which carry ideas from one mind to another. 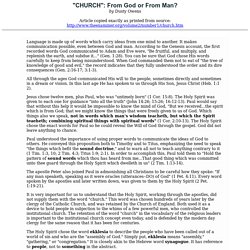 It makes communication possible, even between God and man. According to the Genesis ac­count, the first recorded words God communicated to Adam and Eve were, "Be fruitful, and multiply, and replenish the earth, and subdue it... " (Gen. 1:28). You can be sure that God chose His words carefully to keep from being misunderstood. When God commanded them not to eat of "the tree of knowledge of good and evil," the record indicates that they fully understood the order and its dire consequences (Gen. 2:16-17; 3:1-3). All through the ages God communicated His will to the people, sometimes directly and sometimes in a dream or vision. Jesus chose twelve men, plus Paul, who was "untimely born" (1 Cor. 15:8). Paul understood the importance of using proper words to communicate the ideas of God to others. CHURCH comes from a Greek word meaning the Lord's house. Derivation of "Church" According to G.W.H. William Tyndale (1492? 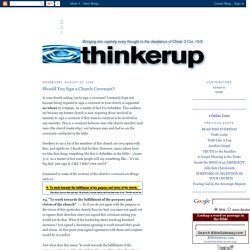 I certainly hope not because being required to sign a covenant in your church is supported no where in scripture. As a matter of fact it is forbidden. This saddens me because my former church is now requiring those involved in ministry to sign a covenant if they want to continue to be involved in any ministry. This is a covenant between man (the church member) and man (the church leadership), not between man and God as are the covenants conducted in the bible. Needless to say a lot of the members of this church are very upset with this, and rightly so.

Contained in some of the sections of the church's covenant are things such as: #4. Just what does this mean "to work towards the fulfillment of the purpose and vision of the church"? I guess the next obvious question is 'what is God's purpose for the church'? Soldier On ~ Garrett. 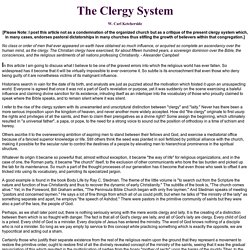 Carl Ketcherside [Please Note: I post this article not as a condemnation of the organized church but as a critique of the present clergy system which, in many cases, endorses pastoral dictatorships in many churches thus stifling the growth of believers within that congregation.] No class or order of men that ever appeared on earth have obtained so much influence, or acquired so complete an ascendancy over the human mind, as the clergy. The Christian clergy have exercised, for about fifteen hundred years, a sovereign dominion over the Bible, the consciences, and the religious sentiments of all nations professing Christianity. - Alexander Campbell In this article I am going to discuss what I believe to be one of the gravest errors into which the religious world has ever fallen.

Historians search in vain for the date of its birth, and analysts are just as puzzled about the motivation which foisted it upon an unsuspecting world. The Palmer Perspective. Unity In Diversity. The Mission and Message of This site is designed to extend the mission and message of W. 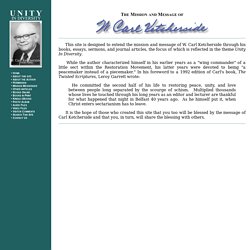 Carl Ketcherside through his books, essays, sermons, and journal articles, the focus of which is reflected in the theme Unity In Diversity. While the author characterized himself in his earlier years as a "wing commander" of a little sect within the Restoration Movement, his latter years were devoted to being "a peacemaker instead of a piecemaker. " In his foreword to a 1992 edition of Carl's book, The Twisted Scriptures, Leroy Garrett wrote: He committed the second half of his life to restoring peace, unity, and love between people long separated by the scourge of schism. It is the hope of those who created this site that you too will be blessed by the message of Carl Ketcherside and that you, in turn, will share the blessing with others.