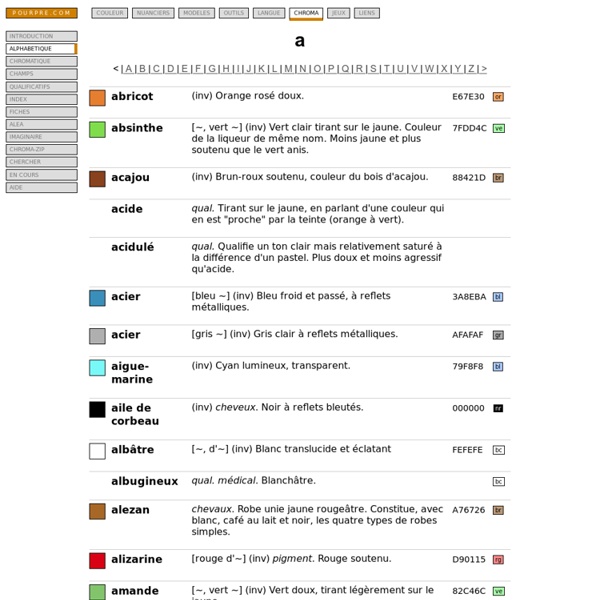 75 Simple British Slang Phrases You Should Probably Start Using Oh, the Brits. No-one can snark quite like they do, and there are certain turns of phrase that are so utterly delightful, the rest of the world really should sit up and take note. Below are just a few common British phrases that you might like to work into your daily vernacular, as they can pepper any conversation with a little extra something. Aggro: Aggressive/in someone’s face.“Are you having a laugh?”: Statement of incredulity, like “you’ve got to be kidding”, and such.

Château de Versailles Lying in the suburbs of Paris, the Château de Versailles was the symbol of the absolute monarchy espoused by Louis XIV and royal palace from 1682 to 1789, when the monarch was forced to return to Paris. The first design of the castle was made by Philibert Le Roy and during the next two centuries there were four building enlargements and renewals, when Louis XIV reorganized the government of France and moved there, when the court was fully established on May 6th 1682. The centre of the power was within the palace walls, where the government offices and the thousands of courtiers lived. By obliging the nobility to spend some time every year in Versailles, the king prevented the development of regional powers, and established the etiquette which was rendered famous and copied all around the European court.

English Listening Online Views: Biking in Cambodia Julia talks about cycing from Cambodia to Vietnam with her friends (Part 1, Part 2, Part 3, Part 4). Mixers : Bad Hair Cut Six people talk about getting a bad haircut. Plus, be sure to check out all the re-edited mixers with new activities 1-25, 26-50, 51-75, 76-100. Museums of the World Reviews An Apple Virtual field trip selection. Museums of the World gives you free access to thousands of museums around the world. It’s designed to give you up-to-date information about museums, exhibitions and other cultural events in your city and across the world. This easy to use and professionally designed application is a must-have for art and culture lovers, travel aficionados and all those who want the right information instantly in the palm of their hand! With Museums of the World you can find museums, exhibitions and events near you based on your GPS location and use Maps navigation information to find them.

Cambridge English Teacher From 1 May 2017, Cambridge English Teacher is no longer available, but all the courses and content are now available to purchase without membership. Courses You can find the online teacher development courses on the Cambridge Learning Management System. Buy Courses as a teacher Buy Courses as an institution Haiti artists forge int'l reputation with art made of junk PORT-AU-PRINCE, Haiti – Amid a maze of car repair shops in Haiti's gritty capital, Andre Eugene pitches a shredded tire he found atop a towering sculpture he built out of rusty engine parts, bed springs and other cast-off junk. "This is what I do: I work with the garbage of the world," says Eugene, assessing the largest sculpture displayed at the entrance of his studio and open-air museum off a crumbling street cutting through some of Port-au-Prince's poorest neighborhoods. The Haitian sculptor is a founding member of Atis Rezistans, a shifting collective of artists who recycle whatever useful scraps they can find to give a raw, physical shape to the spiritual world of Voodoo, or Vodou as the religion is known by Haitians, and weigh in on the country's chronic political and economic troubles. Over the last decade, the work of Atis Rezistans has been exhibited in cities such as Paris, London, and Los Angeles. But it's not all darkness.