What are electromagnetic fields? 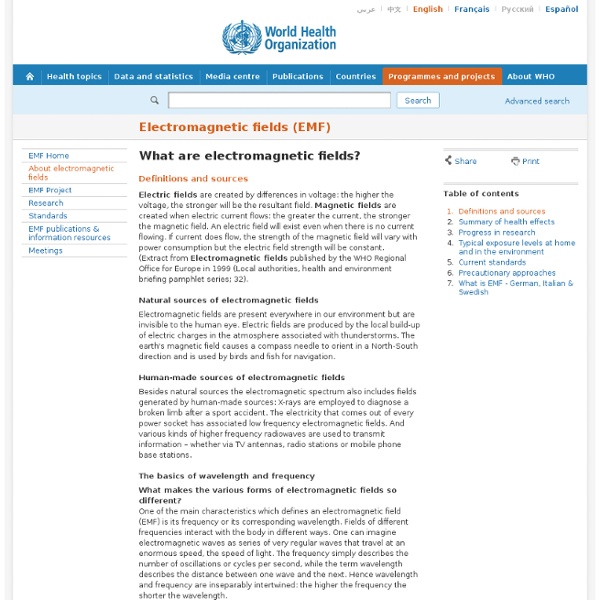 Body Voltage Experiment Possessing an easy, economical way to monitor the condition of the functionality (operability) of a person's bio-electric system—the collection of bio-electric phenomena present in and around a physical body that is used to assist in that body's perpetuation—might help them by affording to them a way to determine the effectiveness of any bio-electrically therapeutic efforts they may be engaged with. This page is a write up of work involved with the development of an economical technique hypothesized to enable a person to monitor the status of the functionality/operability of their bio-electric system quickly, easily and safely. The opinions section is the delineation of the experimenter's personal interpretations of the data obtained rather than a list of claims about that data. Another words, I am saying that I believe that what I am saying is what the numbers' correlation with the physical phenomena that I was experiencing means, but this is what is true for me.

Waveguide Electric field inside an x-band hollow metal waveguide. A waveguide is a structure that guides waves, such as electromagnetic waves or sound waves. There are different types of waveguides for each type of wave. The original and most common[1] meaning is a hollow conductive metal pipe used to carry high frequency radio waves, particularly microwaves. The geometry of a waveguide reflects its function. Some naturally occurring structures can also act as waveguides. Principle of operation[edit] Example of waveguides and a diplexer in an air traffic control radar History[edit] The first structure for guiding waves was proposed by J. The study of dielectric waveguides (such as optical fibers, see below) began as early as the 1920s, by several people, most famous of which are Rayleigh, Sommerfeld and Debye.[5] Optical fiber began to receive special attention in the 1960s due to its importance to the communications industry. Uses[edit] Specific examples: A sketch of the theoretical analysis[edit] and

Powerwatch - Home Five Available Harassment Technologies There are five older technologies capable of extreme destruction of the ability to earn a living, and the quality of life of a target, listed below. None of these technologies require implants, and all can be transmitted silently, through walls, and leave no trace evidence. Since few targets will aquire the correct detection equipment, destruction of a target's life even using these older technologies is a perfect crime under today's justice system. Today's justice system denies that any effective through wall harassment technologies exist, probably because they tacitly approve of the activities of the "anti crime" vigilante groups who sometimes use this equipment. Here is the list: A simple microwave oven, door removed, with the door interlock switch bypassed, and held against the bedroom wall of a target in an apartment building or semi-detached house.

Electromagnetic Reality Electromagnetic Reality by Patrick Quanten MD Although you may not have heard much about it, during the last twenty years there has, however, been an awful lot of research done within the fields of human energy and cellular electromagnetism. We are going to explore a small bit of that brave new world. First of all, let's start with acknowledging that all cellular processes and physiological functions are determined by electrical currents and electrical charges. In summary, the electrical properties of sick cells are different than the electrical properties of the normal tissues that surround them. Both internally generated and externally applied electromagnetic fields can affect cell functions, both for health and illness. Endogenous weak electric fields are naturally present within all living organisms. The body uses electricity (biocurrents) for controlling growth and repair. In the early 1920's, George Lakhovsky developed an instrument he called a "Radio-cellular Oscillator".

Cybernator - Cybernetic Feedback Device The Cybernator A "scientifically designed device based on sound cybernetic feedback principles." This ad for the "Cybernator" was plucked off a bulletin board on the campus of Foothill College in Los Altos Hills, CA in 1976 or 1977. Over the years, it had been folded and has faded some, so a bit of effort was made to "clean up" this electronic reproduction. For your convenience, the text on the original ad has been reproduced below: Cybernator Cybernetic Communicator The Cybernator is a scientifically designed device based on sound cybernetic feedback principles. It is intended for use by: Aspiring politicians Incumbent politicians Backseat drivers Classic in-laws Egomaniacs Lonely hearts Spiritualists Weird children Normal adults Supervisors Executives Weird adults Normal children Geniuses To order YOUR Cybernator send $7.95 plus $2.00 for postage and handling to:Cybernator, HOP.O. Suffice it to say, being several decades later, it is not likely that this offer is still valid.

Evolving Life Innovation » Research – Radiation Absorption – Simple Measurements “To waste, to destroy our natural resources, to skin and exhaust the land instead of using it so as to increase its usefulness, will result in undermining in the days of our children the very prosperity which we ought by right to hand down to them amplified and developed.” - Theodore Roosevelt Modern wireless communication produces a widespread background radiation in the microwave region of the electromagnetic spectrum. From TV broadcasting in the UHF band from 400 MHz, all the way through the cellular bands, and up to wireless networking at 2.45 GHz, and beyond. Radiation absorption devices have been invented to provide a degree of protection against these effects in the form of passive and active radiation energy absorbers placed on our cellular phones, wireless products, and/or carried about our person during normal daily activities. Our solution to this problem is to absorb a proportion of the radiation so that the correct operation of the cellular phone is not disturbed. 1. 2. 3.

IEEE Microwave Theory and Techniques Society How do Dimensional Design’s SafeSpace products work? To Order Call 866-821-8122 SafeSpace products work by altering the quality of a field (rather than its quantity, or strength). How does this happen? To explain that, we need to explain a few key concepts. When particles are repatterned, the quality of a field is changed. That’s what William A. According to Dr. This is called the coherent polarizing field effect. Simply put, when the charged particles in an EMF are repatterned, the entire EMF field is repatterned and the ill effects are neutralized without having to weaken eliminate the field itself. Subtle energies Subtle energies are 'super-physical energies' that is, energies beyond our five physical senses. Subtle energy is considered a part of our physical world, but it is a subtler dimension than our world of solids, liquids and gases. Energy fields interact and affect each other Just as an EMF can influence the physical human body, certain subtle energies can influence certain EMFs. The most senior subtle energy