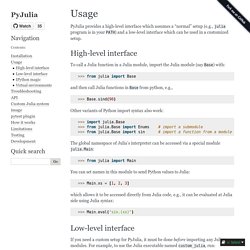 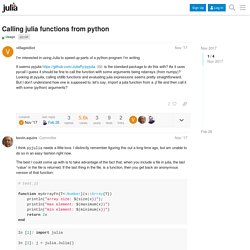 I distinctly remember figuring this out a long time ago, but am unable to do so in an easy fashion right now. The best I could come up with is to take advantage of the fact that, when you include a file in julia, the last “value” in the file is returned. If the last thing in the file, is a function, then you get back an anonymous version of that function: Polyglot.jl: transparent remote/recursive evaluation between languages. The Julia module Polyglot.jl supports transparent remote/recursive evaluation between Julia and another interpreter through automatic call serialization. 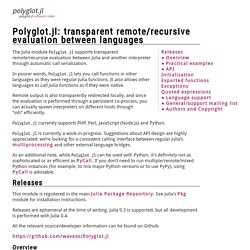 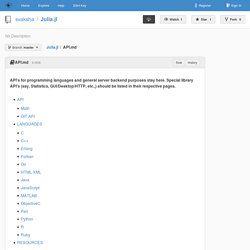 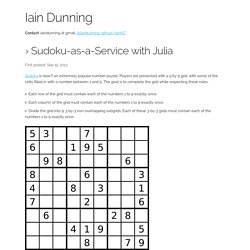 An extremely popular number puzzle. Players are presented with a 9 by 9 grid, with some of the cells filled in with a number between 1 and 9. The goal is to complete the grid while respecting these rules: Each row of the grid must contain each of the numbers 1 to 9 exactly once. An unsolved sudoku puzzle (Wikimedia Commons) In this post I’m going to walk through one way to solve sudoku puzzles, and show how you can offer that functionality as an online service using the Julia programming language. Solving Sudoku puzzles with integer programming The rules of sudoku can be expressed as an integer programming problem which can be solved by any of the many linear and integer programming solvers out there. MIP formulation of sudoku problem Lets break down how these constraints translate back to the rules above. Selection Bias Corrections in Julia, Part 1. Selection bias arises when a data sample is not a random draw from the population that it is intended to represent. 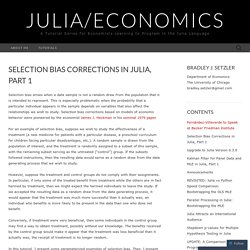 This is especially problematic when the probability that a particular individual appears in the sample depends on variables that also affect the relationships we wish to study. Selection bias corrections based on models of economic behavior were pioneered by the economist James J. Heckman in his seminal 1979 paper. For an example of selection bias, suppose we wish to study the effectiveness of a treatment (a new medicine for patients with a particular disease, a preschool curriculum for children facing particular disadvantages, etc.).

A random sample is drawn from the population of interest, and the treatment is randomly assigned to a subset of this sample, with the remaining subset serving as the untreated (“control”) group. However, suppose the treatment and control groups do not comply with their assignments. Linear Algebra – Quantitative Economics.

Documentation. Julia for Dataviz. Julia for Probability. Julia for statistics. Julia for Optimization. Plot. ODE solver and examples. Setting up Your Julia Environment – Quantitative Economics. Values vs. Bindings: The Map is Not the Territory. Many newcomers to Julia are confused by the seemingly dissimilar behaviors of the following two functions: Why does the first function successfuly alter the global variable a, but the second function does not? 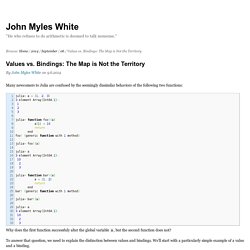 To answer that question, we need to explain the distinction between values and bindings. We’ll start with a particularly simple example of a value and a binding. In Julia, the number 1 is a value: In contrast to operating on a value, the Julia assignment operation shown below creates a binding: This newly created binding is an association between the symbolic name a and the value 1. This first example of values vs. bindings might lead one to believe that values and bindings are very easy to both recognize and distinguish. What, for example, is the value of the following array? To answer this question, note that the value of this array is not defined by the contents of the array.

Hopefully that clarifies what the value of an array is. Random Phantasies. Juliabloggers.com - A Julia Language Blog Aggregator. Julia language. Lindahua/MATLAB.jl. Basic Numerical Programming in Julia. One way to use julia is to work at an Athena cluster machine. 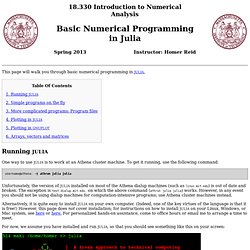 To get it running, use the following command: Svg-edit - A complete vector graphics editor in the browser (in JavaScript) Life Itself. A number of excellent free open-source alternatives to MATLAB have arrived in the last couple of years that have managed to bite away parts of MATLAB's market share. 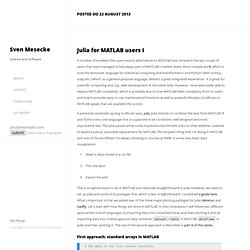 Most notable are R, which is now the dominant language for statistical computing and bioinformatics and Python (with numpy, scipy etc.) which, as a general-purpose language, delivers a great integrated experience - it is great for scientific computing and, e.g., web development at the same time. However, none were really able to replace MATLAB completely, which is probably due to how MATLAB hides complexity from its users and how it provides easy to use mathematical functions as well as powerful libraries (toolboxes in MATLAB speak) that are available (for a cost). A potential contender sprang to life last year, julia.

Julia intends to combine the best from MATLAB, R and Python into one language that is supposed to be consistent, well designed and most importantly fast. Why I’m Betting on Julia. By Evan Miller January 23, 2014 The problem with most programming languages is they're designed by language geeks, who tend to worry about things that I don't much care for. 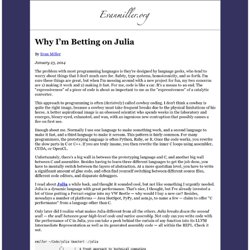 Safety, type systems, homoiconicity, and so forth. I'm sure these things are great, but when I'm messing around with a new project for fun, my two concerns are 1) making it work and 2) making it fast. Getting Around — Julia Language 0.2-dev documentation. Exit([code]) Quit (or control-D at the prompt). The default exit code is zero, indicating that the processes completed successfully. quit() Julia Downloads. Download and install Julia on various Operating Systems v0.2.1.