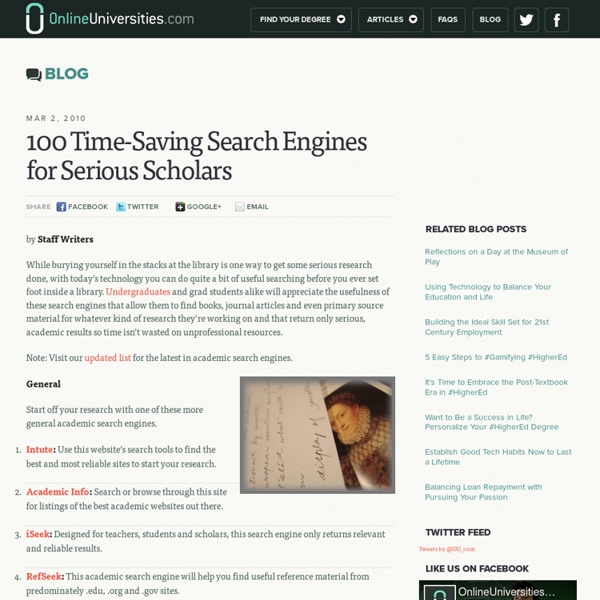 While burying yourself in the stacks at the library is one way to get some serious research done, with today’s technology you can do quite a bit of useful searching before you ever set foot inside a library. Undergraduates and grad students alike will appreciate the usefulness of these search engines that allow them to find books, journal articles and even primary source material for whatever kind of research they’re working on and that return only serious, academic results so time isn’t wasted on unprofessional resources. Note: Visit our updated list for the latest in academic search engines. General Start off your research with one of these more general academic search engines. Intute: Use this website’s search tools to find the best and most reliable sites to start your research. Meta Search Want to search it all at once? Dogpile: Search Google, Yahoo, Bing and more at once with this great search engine. Databases and Archives Books and Journals Science Math and Technology Social Science

Human evolution Human evolution is the evolutionary process leading up to the appearance of modern humans. While it began with the last common ancestor of all life, the topic usually covers only the evolutionary history of primates, in particular the genus Homo, and the emergence of Homo sapiens as a distinct species of hominids (or "great apes"). The study of human evolution involves many scientific disciplines, including physical anthropology, primatology, archaeology, ethology, linguistics, evolutionary psychology, embryology and genetics.[1] The earliest documented members of the genus Homo are Homo habilis which evolved around 2.3 million years ago; the earliest species for which there is positive evidence of use of stone tools. The brains of these early hominins were about the same size as that of a chimpanzee, although it has been suggested that this was the time in which the human SRGAP2 gene doubled, producing a more rapid wiring of the frontal cortex.

Teaching with Ted TED stands for Technology, Entertainment, Design. It started out (in 1984) as a conference bringing together people from those three worlds. Since then its scope has become ever broader. TEDTalks began as a simple attempt to share what happens at TED with the world. Under the moniker “ideas worth spreading,” talks were released online. They rapidly attracted a global audience in the millions. 100 Websites You Should Know and Use Entertainment Meet David Peterson, who developed Dothraki for Game of Thrones There are seven different words in Dothraki for striking another person with a sword. Among them: “hliziﬁkh,” a wild but powerful strike; “hrakkarikh,”a quick and accurate strike; and “gezrikh,” a fake-out or decoy strike. But you won’t find these words in George R. 50 Kick-Ass Websites You Need to Know About It's time to update the entries in your browser's links toolbar. But with recent estimates putting the size of the internet at well more than 100 million distinct websites, it's getting harder and harder to get a handle on all the great stuff that's out there. That's why we've compiled this list. And unlike some lists you may have seen, which try to name the very "best" websites, but end up just telling you a lot of stuff you already know, we've chosen instead to highlight 50 of our favorite sites that fly under most people's radar.

Magical Properties of Herbs Acacia (Acacia Nilotica) Also called gum arabic. Gender: Masculine, Planet: Sun, Element: Air, Deities: Osiris, Astarte, Diana, Ra Protection, Psychic Powers. Burn with sandalwood to open psychic centers. Engineered stem cells seek out and kill HIV in living mice Expanding on previous research providing proof-of-principle that human stem cells can be genetically engineered into HIV-fighting cells, a team of UCLA researchers have now demonstrated that these cells can actually attack HIV-infected cells in a living organism. The study, published April 12 in the journal PLoS Pathogens, demonstrates for the first time that engineering stem cells to form immune cells that target HIV is effective in suppressing the virus in living tissues in an animal model, said lead investigator Scott G. Kitchen, an assistant professor of medicine in the division of hematology and oncology at the David Geffen School of Medicine at UCLA and a member of the UCLA AIDS Institute. "We believe that this study lays the groundwork for the potential use of this type of an approach in combating HIV infection in infected individuals, in hopes of eradicating the virus from the body," he said.

Helping Students Motivate Themselves to Learn Every day, teachers face students who are apparently uninterested in learning. This is a challenge that must be overcome, because every student must be included in meaningful classroom activities. But the students seem to subconsciously decide each day what they will and will not learn. They are much more likely to grasp and retain what they encounter in class if they are motivated to do so. What is Motivation? 64 Things Every Geek Should Know « Caintech.co.uk If you consider yourself a geek, or aspire to the honor of geekhood, here’s an essential checklist of must-have geek skills. The term ‘geek’, once used to label a circus freak, has morphed in meaning over the years. What was once an unusual profession transferred into a word indicating social awkwardness. As time has gone on, the word has yet again morphed to indicate a new type of individual: someone who is obsessive over one (or more) particular subjects, whether it be science, photography, electronics, computers, media, or any other field. A geek is one who isn’t satisfied knowing only the surface facts, but instead has a visceral desire to learn everything possible about a particular subject.