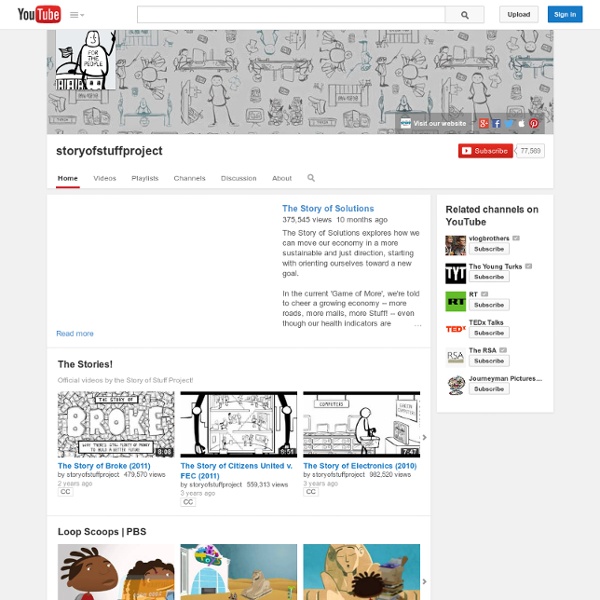 The Story of Solutions explores how we can move our economy in a more sustainable and just direction, starting with orienting ourselves toward a new goal. In the current 'Game of More', we're told to cheer a growing economy -- more roads, more malls, more Stuff! -- even though our health indicators are worsening, income inequality is growing and polar icecaps are melting. But what if we changed the point of the game? What if the goal of our economy wasn't more, but better -- better health, better jobs and a better chance to survive on the planet? Shouldn't that be what winning means? Thank you to our wonderful translators: Sophie from the Mahiru Foundation (Hindi), Jason (Italian), David (Czech), and Yuliya (Russian). Help us caption & translate this video! Show less

Teehee Town Sing along to these fun Learning Song for Kids by Teehee Town. This includes some wonderful planets songs, numbers rhymes, ABC phonics Songs and much more!! Teehee Town has puppets that will make your children smile! :)Kids will learn and sing along Nursery Rhymes, Phonics, ABC Songs, Alphabet Songs, Numbers, Colors, Shapes, Maths, Stories for Children and much more! be a part of the Teehee family and Subscribe: SciFri When Eels Attack! 18,926 views 2 months ago Electric eels zap fish and other underwater prey, but what would make them leap out of the water and shock an animal like a horse? Nineteenth-century naturalist and explorer Alexander von Humboldt first described eels emerging from the water to attack horses, and now Kenneth Catania of Vanderbilt University uses some unique props to reveal shocking insights about the behavior. CREDITSProduced by Emily DriscollFilmed by Jeff NashNarration by Luke GroskinAlexander von Humboldt voiced by Eric KuhlMusic by Audio NetworkAdditional Video by Kenneth Catania LabPhotos and Images by Emil Du Bois-Reymond, Otto Roth, Robert Schomburgk, Shutterstock, Alexander von Humboldt, Friederich Georg Weitsch Thanks to Kenneth Catania, Luke Groskin, Eric Kuhl, David Salisbury Show less

Film School Shorts Hit that SUBSCRIBE button! summer camp horror-comedy about a young teen, his crush on a mischievous girl, and how the pursuit of a kiss awakens a lake monster. A short film by Andrew Ellmaker. Made at Columbia University. Turn Reading Time Into Learning Time Want to turn TV time into learning time? Free streaming videos from services like Netflix and Amazon are a boon to parents committed to a well-rounded education for their children—and not opposed to a little screen time on occasion. How cool is it that we can now harness the power of the Internet and decades of film footage to buttress our children’s learning? As E.D. Hirsch Jr. has argued for a quarter-century, the early elementary years are the ideal time to introduce children to the wonders of history (natural and otherwise), geography, literature, art, music, and more. By providing a solid grounding in the core domains of human civilization, we are providing two wonderful gifts for our children: A store of knowledge that will help them better understand the complexities of our universe as they grow older and a rich vocabulary that will make them strong, confident readers in these early, formative years.

thebrainscoop BOOKS! These are some of my favorite science-y books from the last year or so. Got any recommendations for me!? Links below! ↓↓↓ PBS Game/Show Upload Twitter PBS Game/Show Loading... What's Inside? The past 12 months our channel has gone from 200 subscribers to 1.2 million. We had days where we were the top growing channel in all of YouTube. Amazing considering this channel all started as a second grade science project. MagicBox Animation Upload Magicbox.co.in MagicBox Animation Will the future judge us moral? – Stefan Klein and Stephen Cave In 100 years it will not be acceptable to use genderised words such as ‘he’ or ‘she’, which are loaded with centuries of prejudice and reduce a spectrum of greys to black and white. We will use the pronoun ‘heesh’ to refer to all persons equally, regardless of their chosen gender. This will of course apply not only to humans, but to all animals. It will be an offence to eat any life-form. Once the sophistication, not only of other animals, but also of plants has been recognised, we will be obliged to accept the validity of their striving for life.

Mango Juniors Watch Three Little Pigs, Animated Cartoon Series For Kids, Part 6, only on channel Mango Juniors.Three Little Pigs, Animated Cartoon Series For Kids, Part 1, Mango Juniors. This is story of, Three little pigs. The first ne and the oldest and wisest pig Fina, is not afraid of working hard and you can always depend on him. Second little pig loves to eat pizza, cake and candies. He spends his day dreaming and relaxing. Third Pig thinks he is king of rock and roll, he loves singing and dancing.

How to spot a martyr in search of a cause – Luba Ostashevsky The YouTube video is grainy and little more than 90 seconds long. A group of men sit under olive trees on a hill, in a scene that would resemble a cheery picnic were it not for the rifles resting at their feet. Digital pixelation dances across their faces in an effort to keep their identities hidden, though one fair-skinned young man with a reddish beard is clearly visible. He looks directly at the camera, a big smile spreading across his face. Power Kids Getting lost in outer space was never this fun! Prince and Fox are on an adventure, chasing Snake, all over the Universe. And you're invited. Featuring Prince, the thoughtful humanoid alien prince from Asteroid B 6 12, and his faithful but skeptical sidekick, Fox, a talking fox. They travel the Milky Way and beyond on their starlight powered airplane, to visit a lot of awesome planets, and meet new people everytime. Snake kinda tries to mess things up, but Prince has starlight power with him.

Morality is the key to personal identity – Nina Strohminger One morning after her accident, a woman I’ll call Kate awoke in a daze. She looked at the man next to her in bed. He resembled her husband, with the same coppery beard and freckles dusted across his shoulders. But this man was definitely not her husband.