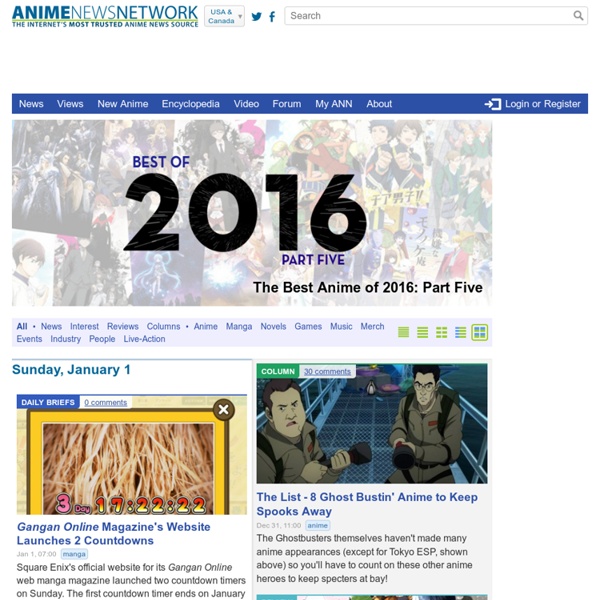 ANNCast - Wayward Sons Justin returns for a Twitter show! More Wind Rises chat, Space Adventure Cobra, the Spring season and more are chewed over. Attack on Titan episodes 1-5 (English Dub) It's not flawless, but Attack on Titan's dub is raw in the best way, successful at yanking out heartstrings and more impressively, maintaining the show's healthy sense of humor. The end result is one of the strongest dubs heard in many years.

Azumanga Daioh liquidhell Lucky Star is an anime also based on 4-panel manga, and thus, shares success with Azumanga Daioh in it's simplicity and non-sequiter (absurd/random) humour. Much like Azumanga Daioh, each episode is essentially standalone and filled with the quirky relationships between a close group of high school friends. Each character of the series has a distinct personality that allows for loads of crazy interactions with eachother (albeit slightly less random). If you liked that aspect of Azumanga, this is a must-watch. An excellent choice for those who want to have another lighthearted, slice-of-life series to simply pick up and enjoy without extra baggage. Neregate Because I love wasting my time on side-projects instead of doing stuff that really matters, I present to you Neregate Statistics, a small service meant to show visitors some statistics about the website, its traffic, etc. There’s only one month for now, but I’ll update it monthly as time goes by. Some of the data may very well surprise you (it still surprises me sometimes too) given the high figures, but that’s because the “views” counter you see on the site has some very precise criterias, unlike the log analyzers which record everything.

Anime Charts Chart via Anichart.net Chart via Neregate. Chart made by me, back when I was crazy enough to do these things. Saiunkoku Monogatari sarwor248 Both series feature a smart heroine who ends up surrounded by male suitors. Everyone around her is sucked in by her charisma, and she helps everyone she meets with their problems. Both anime blend comedy with drama and romance really well. chamomille Both anime are about a cheerfull and energetic girl with strong personality that reaches everyone's heart. Natsume Yuujinchou oneredpanda Both series feature a boy with the ability to see spirits. Both are episodic and include a lot of shinto culture. Both deal with how the protagonist relates to the spirits, as friends or enemies. Both are slow paced. The difference is that Xxxholic is more gothic, while Natsume Yuujinchou is more rural.

Internet Archive Wayback Machine Dear Internet Archivists, We are a non-profit with a huge mission: to give everyone access to all knowledge. Forever. Together we are building the public library of the future. Samurai Champloo sothis Truly, Bebop and Samurai Champloo are all about style. I didn't like Bebop a great deal, but love SC, so it all depends. FOUND: Link/ story search? - Vieux Camellia fanfiction « previous entry | next entry »Jul. 19th, 2010 | 08:52 ammood: hopefulmusic: Baby- Justin Bieber (don't judge)posted by: meaura_at_home in vc_fanfiction

Spice and Wolf kamikun Both series have a very original and refreshing take on the fantasy genre, without the cliché swords and sorcery affairs. They are the kind of "stories" that entertain and ALSO leave you thinking a little after each episode. And the main characters are somewhat similar too. Both shows have a traveler type character and a companion as the protagonists. In Kino´s Journey it is a pure traveler accompained by a talking motorcycle, and in Spice and Wolf it is a merchant traveler accompained by a fox(y) god. Fic: Convergence (Part 1 of 2): lestat_louis I come bearing fic...just re-edited and tweaked. Title: Convergence (Part 1 of 2)Authors: Gairid and ANSeries: Chance MeetingsFandom: VampChronPairing: Louis/LestatRating: Overall NC-17Warning: M/M relationship, graphic sex and vampiric bloodplaySummary: The Chance Meetings series is just that…chance meetings. Mortals that stumble across their path.

Blood+ Skavo Although there is less storyline development in Claymore (not to say there is no development, however), if you enjoyed the hack 'n slash swordplay in Blood+ you will probably like Claymore as well. GodsDragon The Romance of The Rose By: Monique Michiel Spoliers None realy, but prehapes at the same time them all : ) The story line is my own but the charicters are Anne Rices, this is non-profit so This is what I hope to be an orignal spec, very original. If it is not I have just shot my self in the foot.