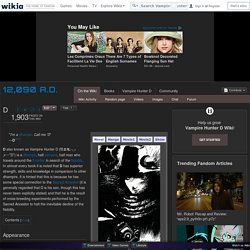 Call me 'D" ―D[src] D also known as Vampire Hunter D (吸血鬼ハンター"D") is a dhampir, half vampire, half man who travels around the Frontier in search of the Nobility. In almost every book it is noted that D has superior strength, skills and knowledge in comparison to other dhampirs. Shōyō Hinata - Haikyuu!! Wiki - Wikia. Appearance Edit Hinata is 162.8 cm, making him the second shortest person on his team, next to Nishinoya. 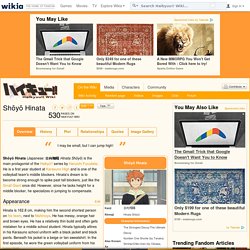 He has messy, orange hair and brown eyes. He has a relatively thin build and often gets mistaken for a middle school student. Hinata typically attires in his Karasuno school uniform with a black jacket and black pants. After joining Karasuno's Volleyball Club, Hinata wears his volleyball uniform–a black jersey and black shorts with white and orange stripes on the sides. Taichi Mashima - Chihayafuru Wiki - Wikia.

Taichi Mashima is an all-around student, as he is gifted in both studies and sports. 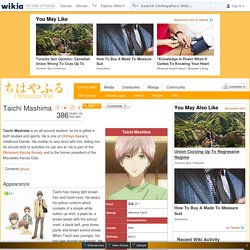 He is one of Chihaya Ayase's childhood friends. His mother is very strict with him, telling him he should stick to activities he can win at. He is part of the Shiranami Karuta Society and is the former president of the Mizusawa Karuta Club. Appearance Taichi has messy light brown hair and hazel eyes. Chihaya Ayase - Chihayafuru Wiki - Wikia. Chihaya Ayase is the protagonist of the Chihayafuru series. 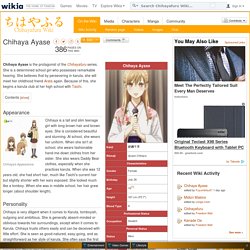 She is a determined school girl who possesses remarkable hearing. She believes that by persevering in karuta, she will meet her childhood friend Arata again. Because of this, she begins a karuta club at her high school with Taichi. Ren Nekoyashiki - Rental Magica Wiki - Wikia. Ren Nekoyashiki (Nekoyashiki Ren) is the executive director and Onmyoudou expert of Astral. 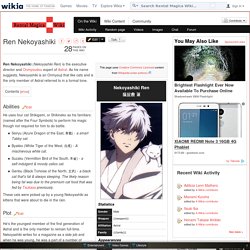 As his name suggests, Nekoyashiki is an Onmyouji that like cats and is the only member of Astral referred to in a formal tone. Abilities Edit He uses four cat Shikigami, or Shikineko as his familiars: (named after the Four Symbols) to perform his magic though not required for him to do battle. Seiryu (Azure Dragon of the East, 青龍) - a smart Tabby cat.Byakko (White Tiger of the West, 白虎) - A mischievous white cat.Suzaku (Vermillion Bird of the South, 朱雀) - a self-indulgent & moody calico cat.Genbu (Black Tortoise of the North, 玄武) - a black cat that's fat & always sleeping.

These cats were picked up by a young Nekoyashiki as kittens that were about to die in the rain. Plot. Ginko - Mushishi Wiki - Wikia. Ginko, whose real name is Yoki, is the main character who is followed throughout the series solving mushi cases. 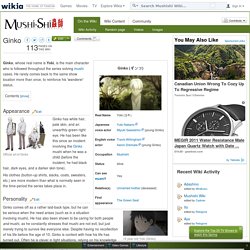 He rarely comes back to the same show location more than once, to reinforce his 'wanderer' status. Appearance Edit. Miyuki Kazuya - Diamond no Ace Wiki - Wikia. Miyuki Kazuya is a student of Seidou High School and is the regular catcher as well as the captain of Seidou High's baseball team. 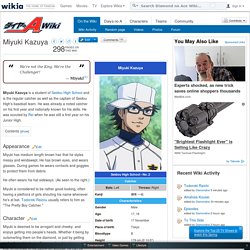 He was already a noted catcher on his first year and nationally known for his skills. He was scouted by Rei when he was still a first year on his Junior High. Appearance Edit Miyuki has medium length brown hair that he styles messy and windswept. He often wears his hat sideways. Yōji Itami - Gate - Thus the JSDF Fought There! Wiki - Wikia. Yōji Itami (伊丹 耀司, Itami Yōji) is the protagonist of Gate - Thus the JSDF Fought There!. 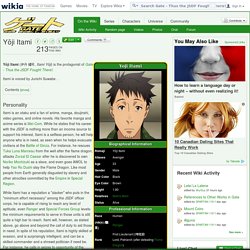 Itami is voiced by Junichi Suwabe . Personality Itami is an otaku and a fan of anime, manga, doujinshi, video games, and online novels. Tomoe - Kamisama Hajimemashita Wiki - Wikia. Tomoe (巴衛) is a fox yokai, presently serving as the familiar of Nanami Momozono in the manga series Kamisama Hajimemashita. 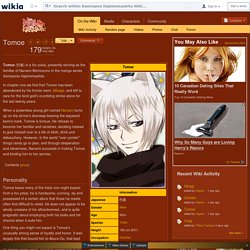 In chapter one we find that Tomoe has been abandoned by his former kami, Mikage, and left to care for the land god's crumbling shrine alone for the last twenty years. When a powerless young girl named Nanami turns up on the shrine's doorstep bearing the wayward kami's mark, Tomoe is furious. He refuses to become her familiar and vanishes, deciding instead to give himself over to a life of sloth, drink and debauchery. However, in the world "over yonder" things rarely go to plan, and through desperation and cleverness, Nanami succeeds in tricking Tomoe and binding him to her service. Personality Tomoe bears many of the traits one might expect from a fox yokai; he is handsome, cunning, sly and possessed of a certain allure that those he meets often find difficult to resist. Ciel Phantomhive - Kuroshitsuji Wiki - Your reliable source to the Kuroshitsuji series. Kisuke Urahara. Kisuke Urahara (浦原 喜助, Urahara Kisuke) is the former captain of the 12th Division, as well as the founder and 1st President of the Shinigami Research and Development Institute. 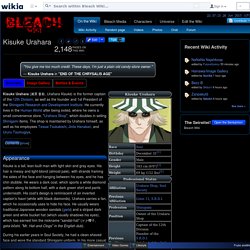 He currently lives in the Human World after being exiled, where he owns a small convenience store, "Urahara Shop", which doubles in selling Shinigami items. Ichigo Kurosaki. Ichigo Kurosaki (黒崎 一護, Kurosaki Ichigo) is a Human who has Shinigami powers. Takumi Usui - Kaichou Wa Maid-Sama! Wiki. Takumi Usui (碓氷 拓海, Usui Takumi) is the male protagonist of the Kaichou wa Maid-Sama! Manga and anime series. Appearance Edit Takumi is a tall young man. Shiba Tatsuya - Mahouka Koukou no Rettousei Wiki. Shiba Tatsuya (司波 達也) is the main protagonist of The Irregular in Magic High School. He enrolled at the National Magic University Affiliated First High School in April AD2095 with his younger sister, Miyuki (深雪). He was accepted as one of the students to be placed in the Course 2 curriculum, marking the start of the series' events. In his second year, he transferred into the newly made Magic Engineering Course. In the volume 16 it becomes in Miyuki's fiance.

Himura Kenshin - Rurouni Kenshin Wiki. Himura Kenshin, known as the legendary hitokiri of the Meiji Revolution, Himura Battōsai (緋村抜刀斎), is the main protagonist and titular character of the Rurouni Kenshin series. Kenshin has spent ten years traveling Japan as a rurouni in search of redemption, carrying a sakabatō with the vow to never kill again. In early 1878, he arrives in Tokyo and takes up residence at the Kamiya dojo, where his vow is tested as he fights to keep the country's peace. Appearance Of small, slender build and with a youthful, feminine visage, Himura Kenshin cuts quite a different figure than would be expected of the legendary Hitokiri Battōsai and his appearance belies his twenty-eight years of age, making him look roughly ten years younger, but he is easily recognized by his infamous distinguishing features: mid-back length red hair tied in a thick ponytail and a cross-shaped sword scar on his left cheek.