As you can see from my current pearltree I love Japanese culture (mainly their shinto and otaku culture), art (design, experimental art, large-scale displays, demonstrations (ex: art using or demonstrating math and physics), murals, manga, art-books, paintings, pictures, illustrations, illusions, arts and crafts, figures and models, etc.), gaming, and futuristic technology (assembly-line robots, medical robotics, etc: ASIMO Honda Robot might help clean up nuclear waste!). However, I am actually an avid reader and I love to learn about interesting things even though I have no talents and have had trouble in school--and life in general. I love antiques, relics, fossils, insects, uniquely evolved plants and animals, rocks and minerals, crystal caves, the largely unexplored deep depths of the sea, I mainly love meaningful fantasy books Like _The Name of the Wind: Kingkiller Chronicles_ by Patrick Rothfuss, _The Deed of Paksenarrion_trilogy by Elizabeth Moon, _The Last Herald Mage_ series by Mercedes Lackey, The Twelve Kingdoms series by Fuyumi Ono (beautiful cover art and illustrations, unique story filled with references to Chinese culture and mythology (author majored in Chinese Culture) (etc). I enjoy fantasy books with history mixed in , historical fiction books with fantasy/scifi mystery elements, fiction, and mystery. I'm interested in ongoing research around the world in many different subjects and unexplained things happening on earth like the sudden increase in largescale disappearances of bees--often leaving few clues behind as to what happened (unknown bee virus and/or parasite?...hard to know because they _disappear_ --little to none available bodies of affected bees to study from affected hives (studies have and are being made of bees in affected regions though and many dissected bees just have common parasites => imunosuficient insects? bee AIDS?: not ruled out as far as I know (please excuse me if I'm wrong: haven't read-up on the more recent studies-- just having fun speculating ^_^) insecticides=> fairly well regulated in western societies, not as much in eastern and south-eastern societies, largescale migration?... billions of migrating bees would be kindof hard for beekeepers, farmers, and entemologists to miss, Bees unable to find their way back to their hives?, aliens capturing them to introduce into their own world for easy pollenation (hahaha...you can never be sure--many things are theorectically possible)? Chinese workers now have to pollinate plants by hand--I read a more hardy hybrid bee was being created with African and Australian honey bees (I think) in Australia to import into different regions to help alleviate the problems. Research on the largscale disappearance of bees and their decreasing population is still inconclusive as far as I know but it is causing more farmers to pay beekeepers to bring their hives to their farms to pollinate their crops (very expensive). We rely on these amazing efficient pollinaters. If bees disappear across the world, it would bee devastating to our food supply because it would debilitate the largscale crop production and force farmers and their workers to hand pollinate their crops. Anyway sorry for the longwinded rant. I'm interested in many things and I am mainly using Peartrees to find and organize my favorite websites and interests. I recently lost all my bookmarks (T_T) so I don't have many pearls to add right now but I thought this would help me keep track of my favorites. Thank you to the developers of pearltree for this amazing firefox extension! (^_^) <3 ~Pamela 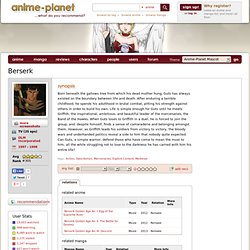 Both of the series have this serious, dark, and abit depressing feeling, and they both follow the same pattern in the storytelling. Both are my favourite shows, and I think almost the only thing that isn't similiar is the time when it takes place :) Samurai Champloo. Sothis Truly, Bebop and Samurai Champloo are all about style. 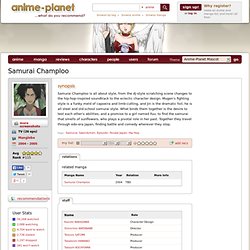 I didn't like Bebop a great deal, but love SC, so it all depends. Regardless, I still realize they are very, very good recommendations for each other. Oozing style from the character designs, to the music, to the episodic plotline. Definitely check it out. Natsume Yuujinchou. Oneredpanda Both series feature a boy with the ability to see spirits. 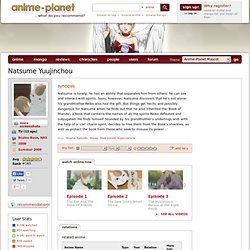 Both are episodic and include a lot of shinto culture. Both deal with how the protagonist relates to the spirits, as friends or enemies. Utawarerumono. Reimius Scrapped Princess is like Utawarerumono because of the way the plot turns out. 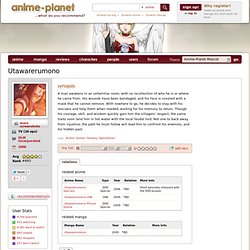 Each Series starts out with a medievil tone and setting, but as the story progresses, you'll find out secrets about the world each series takes place in. Spice and Wolf. Chihayafuru. KuroiTsubasa You might say that these series have nothing in common as their plotlines revolve around completely different things - Bakuman centers around young people trying to become manga authors and Chihayafuru is about youth playing karuta. 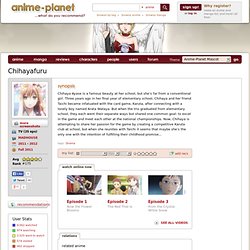 But on the other hand, these shows have plenty of similarities as they both depict young people moving towards their desired goals, steadily improving, competing to become the best, making new friends and meeting new rivals. Azumanga Daioh. Liquidhell Lucky Star is an anime also based on 4-panel manga, and thus, shares success with Azumanga Daioh in it's simplicity and non-sequiter (absurd/random) humour. 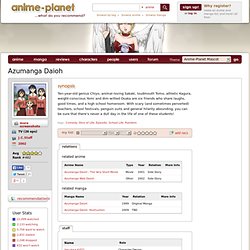 Much like Azumanga Daioh, each episode is essentially standalone and filled with the quirky relationships between a close group of high school friends. Each character of the series has a distinct personality that allows for loads of crazy interactions with eachother (albeit slightly less random). If you liked that aspect of Azumanga, this is a must-watch. An excellent choice for those who want to have another lighthearted, slice-of-life series to simply pick up and enjoy without extra baggage. nike13. Mawaru Penguin Drum. StudioGirlKoi Madoka Magica and Mawaru Penguin Drum have this dark, shrouded atmosphere that makes their worlds seem hopeless, unpredictable, and better off just letting the ''fate'' of their worlds take over. 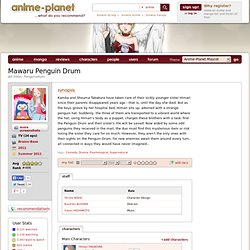 These shows have the power of taking people who seem so ordanairy and making their lifes a living hell, constantly fighting for what they want, even when they know that it may not come to light. The fate of the characters seems just about impossible to change... The fantasy aspect, which usually makes a lot of shows more bright and loving, can make the worst darkness come out. Hana-Saku Iroha. Twelve Kingdoms, The. Saiunkoku Monogatari. Scrapped Princess. Carrot The pacing is very similar in how they handle comedy/serious transitions. 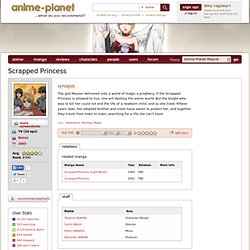 Although Stellvia is sci-fi and Scrapped is only sciantisy the feeling of emotion in both series holds a connection. Seirei no Moribito. Kawaiipie Both Seirei and Mushishi have high quality animation and environments, and an interesting narrative. 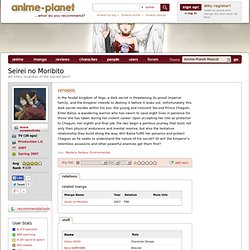 Kurenai. Jyu Oh Sei. DrunkenBlowfish Both are sci-fi anime that focus on a powerful young man finding his old life torn away from him as he is thrown into a new life where he much lead a following of people to find peace. yamirakuen 1. 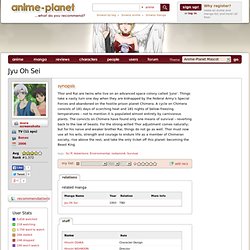 The graphics are SO similar I immediately thought of Toward the Terra while watching Jyu Oh Sei. The genre is also sci-fi, where humans are inhabiting non-Earth planets. 2. Last Exile. Sublime Being totally different genres of anime doesn't stop me from recommending fans of Scrapped Princess to see Last Exile and vice versa. Excellent captivating plots and characters you can empathise with means you'll always be eager to find out what happens next.

TheBurningCrow Man if there are ever 2 series that make you constantly wanting to watch the next episode, it's Last Exile and Scrapped Princess. Although the stories aren't the same, or the animation, the flow of the episodes and the characters endeavors are very captivating and you get sucked in, even if you don't want to. Guilty Crown. Adephi They both center around rebellion, mecha and lots and lots of explosions, have loveable characters and epic music. If you like one you're bound to like the other. Noein. Steins;Gate. Diulf Both deal with hypothetical science, and the characters in both with to use special powers and technology to save people and create a better future. Although Madoka Magica is also fantasy-based, they share extremely similar plot events. Speed Grapher. Texhnolyze. Le Chevalier D'Eon. Azaireal Le Chevailier D'Eon is a revenge story which takes place during the reign of King Louis the XV.

The Hitchhikers Guide to the Galaxy:So Long and Thanks for all the Fish. Terry Pratchett movies. Jeeves and Wooster. Gilbert and Sullivan.