Dramawarmups. Acting Exercises: For High School Students and Beginners. Here are a few acting exercises you can use to sharpen up your craft. 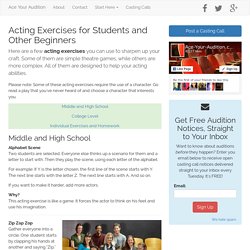 Some of them are simple theatre games, while others are more complex. All of them are designed to help your acting abilities. Please note: Some of these acting exercises require the use of a character. Go read a play that you've never heard of and choose a character that interests you. Middle and High School Alphabet SceneTwo students are selected. For example: If Y is the letter chosen, the first line of the scene starts with Y. If you want to make it harder, add more actors. Why? Zip Zap ZopGather everyone into a circle. Why? Freeze! Why? Question SceneTwo students improvise a scene where the all lines must be questions. Why? Backwards SceneTwo students are selected. Why? Party QuirksOne student plays the host of the party. Why? College Level Public SolitudeThe student will play out their morning routine in the studio as if they were alone. Why? "Stop looking at my shirt! " "Stop looking at your shirt?

" Theatresports and Drama Games. Theatresports is a form of improvisational theatre, which uses the format of a competition for dramatic effect. 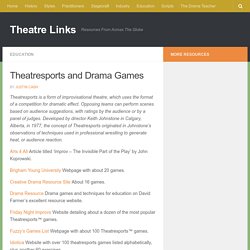 Opposing teams can perform scenes based on audience suggestions, with ratings by the audience or by a panel of judges. Developed by director Keith Johnstone in Calgary, Alberta, in 1977, the concept of Theatresports originated in Johnstone’s observations of techniques used in professional wrestling to generate heat, or audience reaction. Arts 4 All Article titled ‘Improv – The Invisible Part of the Play’ by John Koprowski.

Brigham Young University Webpage with about 20 games. Creative Drama Resource Site About 16 games. Drama Resource Drama games and techniques for education on David Farmer’s excellent resource website. Friday Night Improvs Website detailing about a dozen of the most popular Theatresports™ games. Fuzzy’s Games List Webpage with about 100 Theatresports™ games. Idiotica Website with over 100 theatresports games listed alphabetically, plus another 60 exercises. The Living PlayBook. 2001 Edition Edited by Randy Dixon History of the Living Playbook Over the years, Unexpected Productions has published six editions of our Living Playbook (including this one). 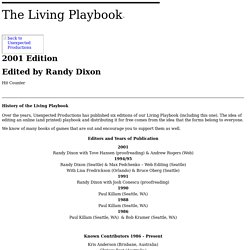 Improv Encyclopedia. Drama Exercises and Games for Kids and Adults. Whether you’re a drama teacher, director, or running a course, acting games are a fantastic tool. 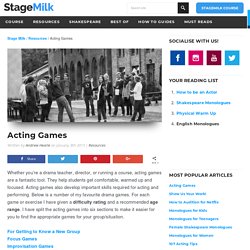 They help students get comfortable, warmed up and focused. Acting games also develop important skills required for acting and performing. Below is a number of my favourite drama games. For each game or exercise I have given a difficulty rating and a recommended age range. I have split the acting games into six sections to make it easier for you to find the appropriate games for your group/situation. For Getting to Know a New GroupFocus GamesImprovisation GamesPhysical ExercisesSuper Fun GamesSimple GoodiesSome Practical Tips For Getting to Know a New Group Moving Name Difficulty: easyAge Range: all ages So this, in my opinion, is the best game to start with when working with a new group. Get your group into a circle.Say your name with a matching gesture and vocalisation. Name and Go Difficulty: easyAge Range: 8 and above I typically use this game after playing Moving Name. Focus Games Me to You. Drama Teacher's Network. Drama Games for Kids and Teens. Drama Games - Drama Resource.